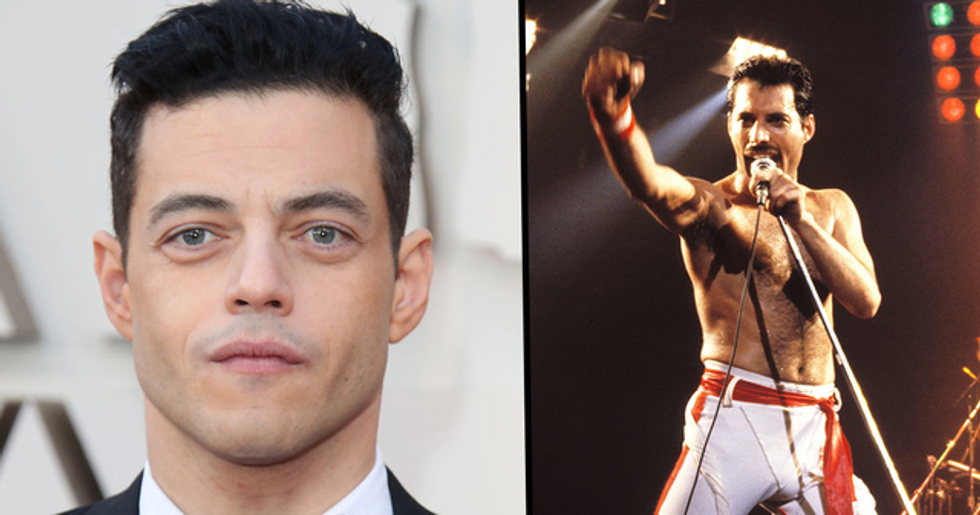 Unlike many of the past ceremonies, this year's Oscars was full of surprises. One which really got the internet talking was the Academy's choice for Best Actor. The honor went to Rami Malek, for his portrayal of Queen star Freddie Mercury in musical biopic Bohemian Rhapsody.

While fans loved the singalong cinema experience, Bohemian Rhapsody has suffered much critical controversy, not least because of allegations against the director, Bryan Singer. Trying to keep things light at the ceremony, Malek avoided this topic in his acceptance speech - but still managed to stumble into some contentious ground.

In his speech, Malek referred to Mercury as a "gay man" who "lived his life just unapologetically himself." But, as well-meaning as he was, many Twitter users took offence to the comment, and for quite a surprising reason. It seems Bohemian Rhapsody just can't stop offending people, no matter how hard it tries!

No matter who you are, you'll have heard of Queen.

The iconic '70s band have an unbelievable array of hit songs, and a legacy of fans which remain incredibly loyal to this day.

So it's no surprise the biopic of Queen's front man was equally popular.

Bohemian Rhapsody is one of the most commercially successful films of the past year, thanks to its high nostalgia factor and brilliant soundtrack.

Malek worked incredibly hard on the difficult role, and many think he deserves massive acclaim for being able to bring such a multi-faceted and beloved role to life.

Malek's performance has earned him much celebration.

He's won many awards for his portrayal of Mercury, and even the film's detractors largely admit that Malek's performance was something quite special.

Playing Mercury is no mean feat.

The Queen front man was both extravagant and private, both brash and vulnerable. Being able to portray these contradictions while still making the character believable deserves huge props.

Most Queen fans loved the movie.

The film cleverly makes the soundtrack of the film almost an additional character. The story of the band is told through their hits, making it a joyful cinematic experience and an instant singalong classic.

In spite of its success, the film has faced controversy.

Many took issue with the way it skimmed over many of the darker aspects of Mercury's life, including his drug use and eventual death from AIDS.

These weren't the only problems with the movie.

The film played a little bit with the actual facts of Mercury's life, trying to fit events into a more natural story arc, rather than depicting things as they really happened.

There have been even bigger problems, too.

The director initially attached to Bohemian Rhapsody, Bryan Singer, has faced allegations of sexual harassment and assault, tainting the film with darkness.

Many question how Mercury would feel about the movie.

Mercury was proudly outrageous, and the minimizing of the wilder aspects of his life can be seen as problematic to his memory. Some believe Mercury's real life was cast aside in favor of making a more commercially viable film.

In spite of these issues, Malek has received much critical acclaim.

This week, he received the Academy Award for Best Actor for his portrayal of Mercury, in a surprise victory, beating out heavyweights including Bradley Cooper and Willem Defoe.

In fact, Bohemian Rhapsody was the most awarded film this year.

Rami had a tricky task with his acceptance speech.

He did his best to avoid any of the controversies surrounding the movie. In fact, none of the Bohemian Rhapsody acceptance speeches made any reference to Bryan Singer.

"I think about what it would have been like to tell little bubba Rami that one day this might happen to him, and I think his curly-haired mind would have been blown. That kid was struggling with his identity, trying to figure himself out." Malek said.

But this is where Malek stumbled into problematic territory.

He continued, saying, "We made a film about a gay man and an immigrant who lived his life just unapologetically himself. And the fact that I'm celebrating him and this story with you tonight is proof that we're longing for stories like this."

Although undoubtedly well-meaning, there's an issue with what Malek said.

Because overtly referring to Mercury as a "gay man," is not just oversimplifying his sexuality - it may actually be plain old factually incorrect, too.

Because although Mercury did have same-sex romantic relationships, he also had a female partner.

Mary Austin, pictured here with Mercury in 1986, was incredibly close to the singer. They were engaged for a period, and remained, according to some, the love of Freddie's life.

As you may have expected, Twitter had some strong thoughts on the subject.

Many thought the categorizing of Mercury as "gay" was massively problematic. At the very least, it's an overly simplistic view, and shows a lack of open-mindedness on the park of Malek.

Many wished he had called Mercury bisexual instead.

Freddie Mercury was unapologetically himself, as a bisexual man, yet Rami Malek erased his sexuality by calling him… https://t.co/c6TLxm23Fp
— Himbo Depot (@Himbo Depot)1551068235.0

The fact Mercury had romantic relationships with both men and women does seem to suggest bisexuality rather than him being a "gay man."

This problem actually has a name.

Rami Malek just said “We made a movie about a gay man” when he knows or should be knowing damn well Freddie Mercury… https://t.co/VqsL7OsnUy
— Mercedes Griffeth (@Mercedes Griffeth)1551066804.0

Bi erasure is the cultural phenomenon in which people are categorized as either "gay" or "straight," and invalidating anything that falls in between the two on the sexuality spectrum.

People pointed to this fact.

A literal line of the script refers to Mercury's bisexuality - so why is Malek still under the impression that he was gay?

Others made jokes on the topic.

It's hard to know exactly what Mercury's response (both to the film as a whole, and to this Oscars speech debacle) would have been - but we can't imagine he'd be thrilled.

Some pointed out the contrast between the speech and the film.

Wellll....I'm happy Rami Malek identified Bohemian Rhapsody as a movie about a gay man. I wish someone had told the screenwriters.
— Mark Harris (@Mark Harris)1551066641.0

It seems Malek wanted to use his speech to be more socially conscious - but the film mostly skimmed over issues of sexuality and race, rather than constructively discussing them.

Many thought Malek was trying to turn the film into something it wasn't.

Bohemian Rhapsody may just be essentially the movie equivalent of a Queen karaoke night - and that's ok! What it isn't, though, is shoehorning references to wider issues where they don't belong.

It seems the aims of Bohemian Rhapsody have been muddled.

For those who wanted a fun, exciting biopic with an excellent soundtrack, Bohemian Rhapsody absolutely fit the bill. But for those hoping for a more intimate, revealing view of a complicated man, the film failed.

Some drew attention to this fact.

Actively categorizing Mercury as bisexual may be as problematic as Malek's assertion that he was gay. Essentially, we don't know Mercury's preferred terms, and applying any to him is nothing more than conjecture.

Basically, we have no way of knowing.

A reminder that Freddie Mercury never revealed his sexuality to the public so it’s not okay to spread things around… https://t.co/He1LXOT0nZ
— kay🌟 (@kay🌟)1551078051.0

And since there's (tragically) no way to ask Mercury what label he would most prefer, it may be best to avoid labeling him as anything at all.

Regardless of Malek's speech, the social and cultural implications of the film are still under scrutiny.

In spite of what most consider to be an excellent, uncanny portrayal of Mercury, some question the casting choice of a straight and Egyptian actor for the role.

How the film will impact the cultural memory of Mercury should be critiqued. After all, this is the man who once said, "I have visions of actually having a film made of my life story, one day, which I would have a key part in. I might not play the lead myself. My dears, the things I've done in my lifetime... it'll be totally triple X-rated, I'll tell you!"

Although Mercury did also say this.

So it's difficult to know exactly where Mercury would stand on these issues. One thing that we should all agree on, though - it's probably best not to assign a sexuality to someone else, particularly at one of the world's most-watched cultural events.