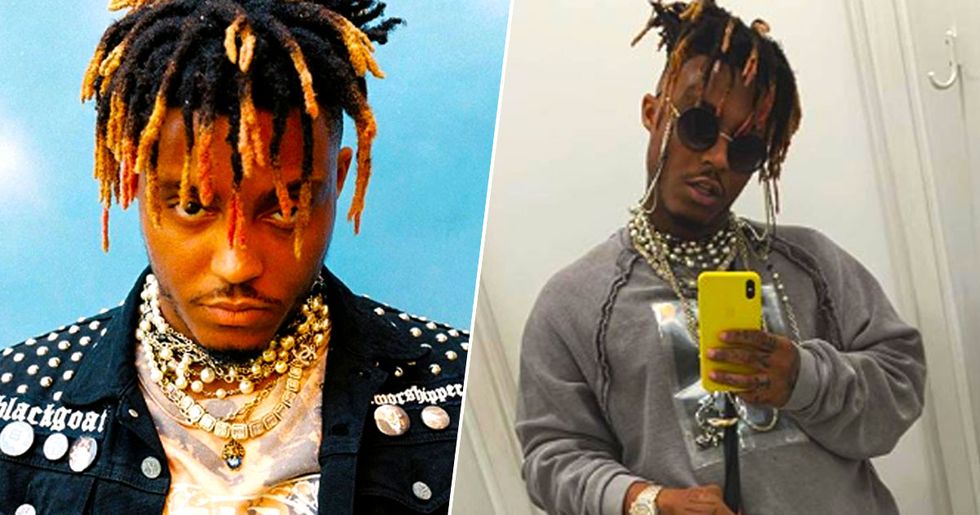 The up-and-coming rapper Juice Wrld has tragically passed away at the incredibly young age of 21.

Juice Wrld was born and raised in Chicago and was best known for his hit singles All Girls Are the Same, Lucid Dreams, and Bandit.

Although Juice Wrld died so young, he had already made a huge name for himself, and was expected to become one of the biggest names in the rap world.

Keep scrolling to learn more about Juice Wrld and his tragic death.

Juice WRLD was born in December 1998 and had been celebrating his 21st birthday over the past week.

Following the tragic news of his death, the post has incredibly quickly hit over one million likes on Instagram.

He was raised in Illinois.

Born Jarad Anthony Higgins in Chicago, Illinois, Juice Wrld then moved to Homewood where he was raised alone by his mother.

His mother was very conservative.

She was also incredibly religious and would not allow Jarad to listen to hip-hop music. Instead he listened to rock and metal.

Many of Juice Wrld's influences came from Guitar Hero and Tony Hawk games, which introduced him to artists such as Billy Idol, Blink-182, Black Sabbath, Fall Out Boy, Megadeth, and Panic! at the Disco.

His name was inspired by Tupac.

We regret the loss of rapper Juice Wrld . We want your family, friends and fans to have a lot of strength. Recall that Juice Wrld made a featuring with Suga and RM called "All night" on BTS World

He had an interesting career.

Just two months back, the rock band Yellowcard announced they were suing Juice WRLD for $15 million for copyright infringement. The band claimed he copied elements of their 2006 song Holly Wood Died for his breakthrough 2018 single Lucid Dreams.

He also gave out his number to fans.

Juice Wrld was also different for allowing all of his fans to get in contact with him. His number was on his Instagram page and if you had any worries or just wanted to talk to somebody, he claimed he would always pick up.

He died at Midway Airport.

He claimed he was feeling ill when he arrived at the airport, and was conscious when he was taken to hospital. The rapper was said to have been bleeding from the mouth when medics arrived at Chicago's Midway Airport.

He then suffered a seizure.

After claiming he felt ill upon arriving at the airport early this morning, Juice Wrld then suffered a seizure which turned out to be fatal.

He was pronounced dead at hospital.

Shortly after he was taken to hospital, he was pronounced dead. The cause of death is not currently known.

Our thoughts go out to Juice Wrld's family and friends at this hard time. RIP.