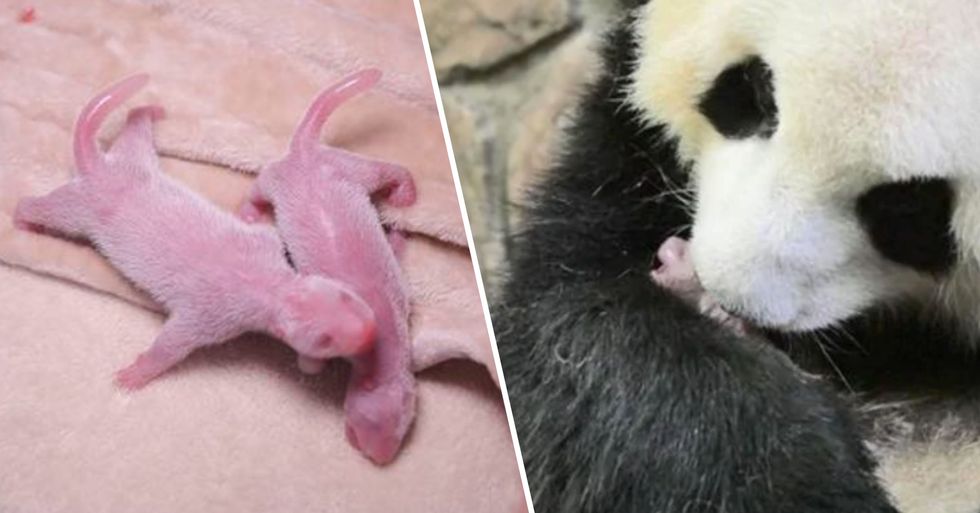 Giant pandas are known for having a bad rep when it comes to reproduction, their laid back attitude and playful demeanor, are just some of the many things we love about these gentle giants.

Their complete disregard for the survival of their own species, albeit slightly humourous, has initiated countless breeding programs across the world.

The latest video to come from China has shaken things up, and people have hope that the adorable video will spread optimism in this troubling time...

I don't think anyone in the world could argue against the fact that pandas are insanely cute...

One of these gentle giants has given the whole world hope by doing the unexpected. The new footage is adorable.

The giant panda is one of the most endangered bears in the world.

The bears, which are native to China, have suffered a huge population decline in the last few decades, which has mainly been a result of the rapid human population growth across the country.

Their habitat has gradually been destroyed.

One of the main reasons that panda populations have declined is habitat destruction. As the human population in China rapidly grew, pandas’ habitats were taken over by development, pushing them into smaller and less livable areas. Wild giant pandas can now only be found across a handful of mountain ranges in central-western and south-western China.

And, as a result, the number of pandas left in the wild is scarce.

There are now only around 2,000 pandas left in the wild, which qualifies the animal to be considered as vulnerable of extinction by the IUCN.

This habitat destruction has destroyed their main source of food...

Bamboo. Pandas famously feed on bamboo, which blooms several different varieties at different times of the year. If one type of bamboo is destroyed by development, it can leave the pandas with nothing to eat during the time that it normally blooms, increasing the risk of starvation.

More and more pandas are being bred into captivity.

A number of captive breeding programs are underway across the globe, with as many as 500 bears being born into captivity.

One of the most popular breeding facilities is Cheng du Research Base in China.

They specialize in breeding Giant Pandas. Surprisingly this research facility is actually open to the public, which means we can share behind the scenes footage of the latest groundbreaking news.

The base is known for giving visitors a "park experience."

Their website assures they're "providing a unique program and experience for its visitors so that they leave focused on giant panda and wildlife conservation."

It has become quite the tourist attraction...

The panda base is known as the best tourist destination to get closer to the rare giant pandas. Visitors can closely observe the giant pandas play with each other, use enrichment toys, or watch female pandas nursing their cubs in the nursery rooms.

Sadly the base was closed for 2 months due to the pandemic, leaving everyone wondering what would happen to the pandas under lockdown...

But after reopening on March 25, visitors were given a warm welcome by the adorable giant pandas. However, it was the surprise that threw them off guard...

Visitors got more than they bargained for when they live-streamed the panda enclosure...

Before the visitors were told about the exciting news, there was an opening ceremony and a whole range of activities, including a flash mob to start the day off right.

5 lucky visitors were picked out to witness the exclusive live-stream.

The video left visitors in shock, after this once in a lifetime experience, and the reason why is pretty obvious...

Pandas have a bad rep when it comes to reproduction.

Research has shown this is largely due to captivity, and actually, when they're allowed to choose their own mate, their libido significantly increases.

Research found that both male and female pandas are more than twice as likely to start mating with an individual that they had shown interest in.

Who'd have thought the best results were when both males and females chose one another?

Chengdu Research Base must have some seriously attractive pandas, as they announce the most amazing news to the public...

Just last month, China welcomed an adorable pair of twins into the world, and the video is captivating.

The little cubs have been named Ping Ping and An An, which means ‘Safe’ and ‘Sound’ in English.

It's hoped that the babies born on March 17 will bring a sense of optimism to the world during this difficult time.

One of the researchers, Wu Kongju, gave some insight into the birth...

Saying: "This is the fifth time Fuwa has become a mother. It is very rare for pandas to give birth in spring. She is turning 17 this year and now has eight babies. It is also rare for Fuwa to show this much affection towards her babies. We are very glad." We sure are glad too.

You can watch the adorable video below...

Surely this is a sign that things will get better. We can only hope that endangered animals will continue to breed with the help of facilities like these. Keep scrolling for some more amazing animal news... you might even want to help out yourself!