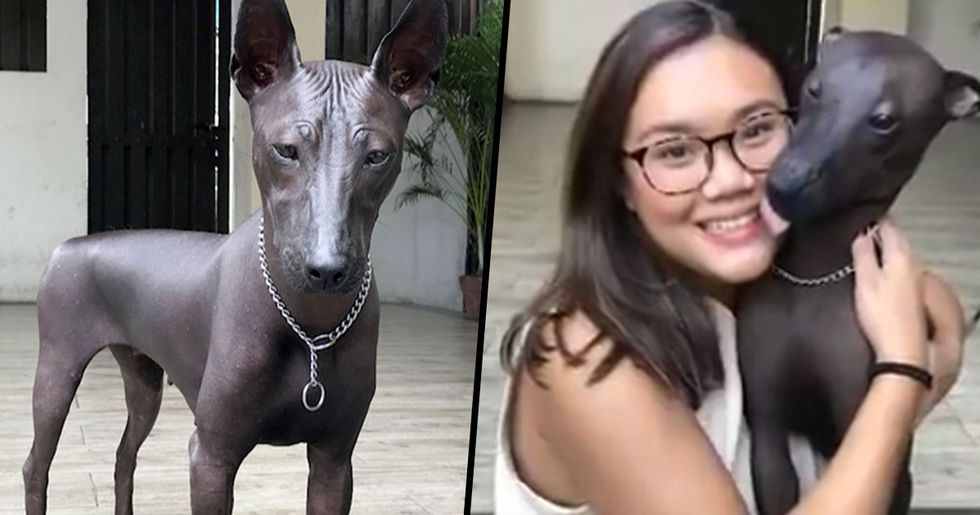 Rare Dog Goes Viral Because People Think It's A Statue

It's a great deal. Two for one. Get a pet and a house decoration. Especially since Xolo dogs are so intelligent and easy to train. They can sit there just like a statue. (Not for long, though.)

A lot of people find Piper, the canine hero of this story, to be far from a good-looking dog, but they're obviously wrong. She's gorgeous. Her dark brown skin, dark eyes, bat-like ears... If Batman had a dog this would be it.

According to MSN, Piper is barely 1 year old but has already joined the club of Insta-famous dogs. Since Piper is a Mexican hairless breed, on camera she looks like a very realistic statue. In other words, a piece of art.

Looking at the photos of her on Instagram has really messed with people's visual senses. They couldn't believe Piper is a living, breathing dog. Much to her owner's amusement.

One photo of Piper managed to confused thousands of people online, who were convinced she was a statue, MSN reports.

Her owner Sandra Pineda thinks it's hilarious but understandable. Piper does have a unique look.

She got Piper in March last year, when the dog was just 2 months old. Sandra posted the internet-breaking photo on 10 January and within hours it received over 10,000 likes and thousands of comments.

Sandra said, “It was so funny to see all these comments coming through of people thinking Piper was a statue."

“They were all really confused and asking me whether she was real or not." “At first, I thought it was a joke, but then realised they were serious. They just couldn’t believe that she was a real dog."

“I guess I’m so used to her I don’t see it as much as other people, but my friends and family told me they can definitely see it."

“It’s actually really flattering to think that my beautiful dog could be mistaken for a piece of art."

“Piper is a quirky dog, although she looks serious and even intimidating to some, she’s actually such a sweetheart."

"She loves cuddles and always insists on sitting on your lap." According to National Geographic, MSN says, Xoloitzcuintle dogs have existed for over 3,500 years and were an important part of ancient Aztec and Maya life.

Sandra said people sometimes make fun of Piper's appearance, but she doesn't pay attention to it.

"We came across pictures of a Xoloitzcuintle and my dad got so excited because he’s always wanted a dog like that."

"We did our research and found a reputable breeder who had puppies available."

"It’s actually quite difficult to find this breed and we’ve never come across another Mexican hairless in the Philippines, so when we saw her, we knew we just had to have her."

"I love this breed because they’re such unique dogs."

"The history behind the Xolo is so rich and interesting which only added to the love we had for them."

"I also really like the fact that she’s hairless, it’s very easy to deal with."

"We use a mild dog shampoo on her, and after baths she gets lathered up in virgin coconut oil to keep her skin moisturised and shiny."

"Some people don’t see Piper’s beauty or her regal look which baffles me because I think she’s just gorgeous."

"I’ve gotten mean comments from people saying they think Piper is odd-looking or it makes them feel weird and uncomfortable looking at her."

"I honestly think people should give Piper, and all Xolos and other hairless dogs a chance because they’re really the sweetest and funniest pups you will ever meet."

If you're wondering, the name of the breed, Xoloitzcuintle, is pronounced Show-low-its-queen-tli, according to Dog Breed Info.

Other names include Mexican Hairless, Tepeizeuintli, Xoloitzcuintle, and Xolo. But I think we can all agree "Xolo" is the coolest one.

"It is very hairless with or without a short tuft of hair on the head and tail."

Xolos also come in a wide range of colors, from black to bronze to red.

"In an average litter of five, four will be hairless and one will be coated."

"This is a very robust and hardy breed, with a broad skull and a black or skin-colored nose."

Xolos have almond-shaped eyes and they're usually either dark brown or the same color as the dog.

"Its most noticeable characteristic is its large, upright bat-like ears; it is very keen and can hear and alert you to danger or stranger." Told you, it's Batman's Batdog.

Interestingly, these dogs actually change colors as they get older.

In terms of their personality, Xolos are very intelligent, loyal, alert, athletic and extremely loving to their family. But Dog Breed Info warns that all family members should play a role in leadership, rearing, training and feeding of their Xolo. Otherwise the dog will bond to the one person or people who do.

"It is naturally protective and aloof with strangers."

Xolos are especially great with children. Dog Breed Info adds, "It is a myth that Xolos are vegetarians, however they do love veggies."

Xolos are becoming a more popular choice for an obedience dog, therapy, agility, and conformation.

"Many swear they have learned more from their Xolo than any other breed, because they are so intelligent and in tune with their family."

Xolos are also sometimes called Velcro dogs for they tend to stick to their owner at all times and so rarely run away.

"One owner’s testament claims she called and called for her Xolo only to look down and find it sitting right there looking up as if to say, 'here I am.'"

"Another owner claims her Xolo loves to climb trees with the kids and ride the horses with the owner. The Xolo can escape anything or climb anything only to get to where you are."

"With no shedding, no dander and no fleas, the hairless variety is very popular with clean, neat people, those with allergies and asthma, and with people who suffer from pain and arthritis type ailments."

Xolos are some of the healthiest dog breeds out there.

"Despite what many have read on the Internet, the Xolo's skin is very hardy and requires very little care. In fact over-bathing can strip the skin of natural protection, causing more harm than good."

But they do require lots of movement.

These dogs, especially while still young, need lots of exercise, discipline and attention. Something to keep them busy and out of trouble. When they get older, though, they're much calmer and more quiet, having no problem to stay at home when you go out.

But they would definitely prefer to go out with you.

"The Xolo is a very long-lived healthy breed. About 15 and up to 20 years is very common."

It's one of the world's oldest, and rarest, dog breeds. That's one more thing that makes Xolos so unique.

"Artifacts and clay pottery of this ancient breed have been found in the tombs of Colima, Mayan and Aztec Indians."

"They were highly prized for their loyalty, intelligence, curative and mystical powers."

"Ancestors of the Aztec Indians brought hairless dogs called 'Biche' (meaning naked) with them when they arrived in Mexico from Asia."

"The toasty warm body heat of the toy hairless dogs made them in demand as ancient hot-water bottles, relieving stomach pains and rheumatic joints, or simply for warming beds during cold nights."

But today Xolos are not that popular, compared to other dog breeds. It's only 139th of 193 breeds on the American Kennel Club (AKC) Breed Popularity list.

AKC says the Xolo used to be "the ancient Aztec dog of the gods." According to them, "mentions of these 'strange hairless dogs' appear in the journals of Columbus and other European explorers."

Ancient Aztecs supposedly named the breed in the honor of their dog-headed god Xolotl.

"Xolos were considered sacred by the Aztecs and often were sacrificed and buried alongside their owners to serve as protective guides to the next world."

AKC even suggests that since the breed has existed for over 3,000 years, it might be correct to say that the Xolo was the first dog of the Americas.

Xolos have also appeared in paintings by famous Mexican artists such as Diego Rivera and Frida Kahlo.

Now Mexicans consider the breed to be a national treasure.