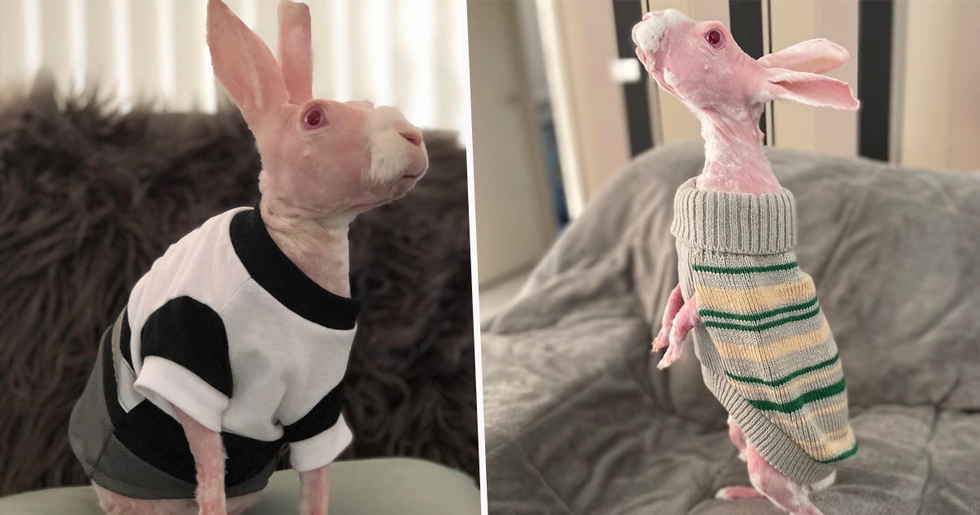 We all love pets, don't we?

Well, the heroic story of Mr. Bigglesworth, the hairless rabbit, is guaranteed to capture hearts all around the world.

Keep scrolling to learn his story...

Pets are one of the many joys in life...

And as every pet owner can agree, having a furry companion is simply wonderful.

But sadly, not all animals are able to find a loving home...

And their appearances often has a lot to do with this.

A lot of people only want a pet that is fluffy and cute, which is a very harsh reality for many animals out there.

Not all pets are fluffy and cuddly...

But this does not mean that they deserve to be euthanized.

All animals deserve a loving home...

Regardless of their looks.

And Mr. Bigglesworth is a prime example of that!

This unusual looking rabbit was adopted by a woman called Cassandra...

And when she was searching for a baby rabbit to adopt, she was left confused by an ad for a litter of rabbits for sale excluding "the hairless one."

Having never heard of a hairless rabbit...

She contacted the breeder out of curiosity and was told that she could just have the little bunny for free.

So why exactly was this little guy born hairless?

Rabbits without hair aren't always a result of animal cruelty and many are born hairless - just like Mr. Bigglesworth. Hairless rabbits are often born due to a genetic condition that is completely out of their control.

This means that breeders usually resort to euthanizing these poor creatures instead of selling them.

Cassandra couldn't allow this to happen to the defenseless little bunny in the litter...

So when she offered to buy him, the breeder simply let her have him free of charge.

And he now has a long and happy life ahead of him.

But despite already owning 2 other rabbits and a dog, Cassandra was inexperienced with caring for a hairless rabbit...

She struggled to find information online, so she decided to create Mr. Bigglesworth an Instagram account to find help... and this worked an absolute charm.

The little rabbit has gained a significant following online...

Many owners of hairless rabbits came out with some advice...

For instance, having Mr. Bigglesworth wear protective layers such as knitted jumpers will prevent his skin from getting sore and blistering.

And after a few months of TLC...

The little bunny started to grow a few significant hairs - showing that he would have been a soft white rabbit without his condition.

But his condition doesn't stop him from being totally adorable!

This goes to show that it doesn't matter how an animal looks and that all pets deserve a happy and healthy life.

Keep scrolling to check out the most famous pets on the internet...