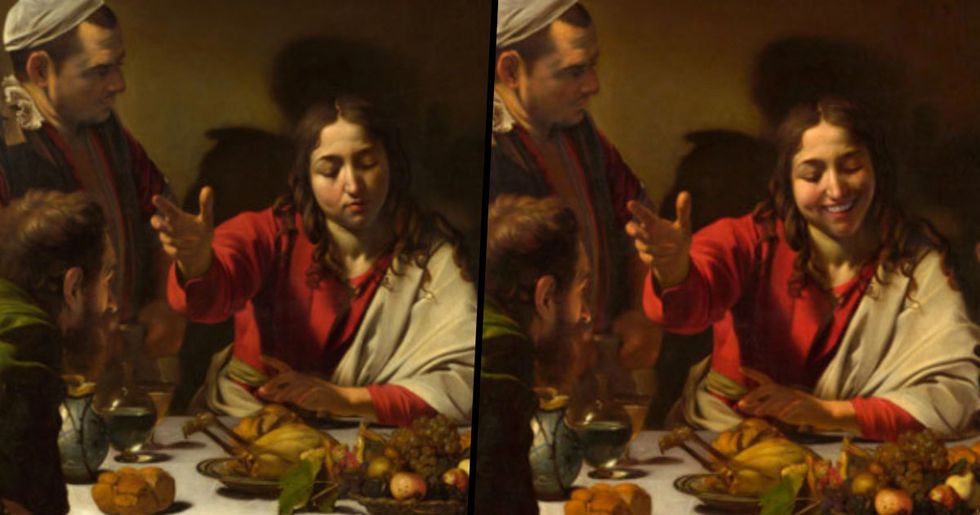 In a society where things like selfies and filters exist, it's easy to be confident.

But, back in the day, there were no cameras. Only paint. So, in order to get yourself recognized, you'd have to pay an artist to paint you in the best light. There's one common feature that every artist seemed to keep constant though. And that's that same smoldering expression that we all seem to have adopted.

Maybe that will always be the look? Who knows?

However, you know what they say? Everyone always looks better with a smile on their face! Check out these famous portraits that have been edited with the coveted Faceapp so that they all have a cheeky grin. Keep scrolling to see the hilarious outcome of this well-needed make-over...

Shakespear's better off not smiling, to be honest... Loving that hoop earring though!

28. "The Artist In His Museum" by Charles Willson Peale

This is the look you give when you get caught peeping... How awkward.

When you find out you've won the lottery mid-way through having your portrait done.

Manet would have won some extra brownie points if he painted on a smile!

Moving away from poetry to write comedy... Bold move, Edgar.

24. "Judith At The Banquet Of Holofernes" by Rembrandt.

23. "Supper At Emmaus" by Caravaggio.

When you're trying to tell a story but you've had a little too much to drink...

Everyone always talks about Mona's smile and how gloomy it looks. Maybe we need to replace the original with this version.

The look you give to the artist when you've just stolen your friend's husband.

20. "Self-Portrait With Thorn Necklace And Hummingbird" by Frida Kahlo.

She genuinely looks so much friendlier with a smile!

18. "The Lady of Shalott" by John William Waterhouse.

In this day and age, the Lady of Shalott would definitely be one of those Instagram influencers. No doubt about it.

Do you see how a smile can change everything? Exhibit A!

You would not want someone at a bar turning to you and giving you this look. Am I right, ladies?

15. "The Desperate Man" by Gustave Courbet.

Johnny Depp, is that you? Yikes.

14. "Portrait Of Adele Bloch-Bauer I" by Gustav Klimt.

When you're trying to be serious for a picture but your squad is making you laugh too much.

12. "Lady With An Ermine" by Leonardo Da Vinci.

Imagine they put a smile on the stoat too? I would have died laughing!

I can almost hear the artist shout: "Give us your best thinking face... No, no, that's your awkward face. Oh God."

Um... Jesus was being tortured... And I'm sure he wasn't smiling. But okay. We'll accept it as an artistic concept.

Our Founding Father should have smiled more often.

Another iconic piece. Her smile is extremely cute if I do say so myself!

7. "Lady In Blue" by Thomas Gainsborough.

She was the only one that almost seemed to be smiling in her portrait, though it did look slightly dull without the full stretch.

Those have to be dentures! Surely!

5. "Girl With A Pearl Earring" by Johannes Vermeer.

I'm officially changing the name of this one to "Girl With A Lovely Smile." It doesn't have the same ring though, does it?

They say the camera adds ten pounds, but it looks like this artist managed to drop ten for this picture of Henry (VIII.)

Now he truly is laughing.

Can someone paint me like this? I am willing to pay, in hugs!