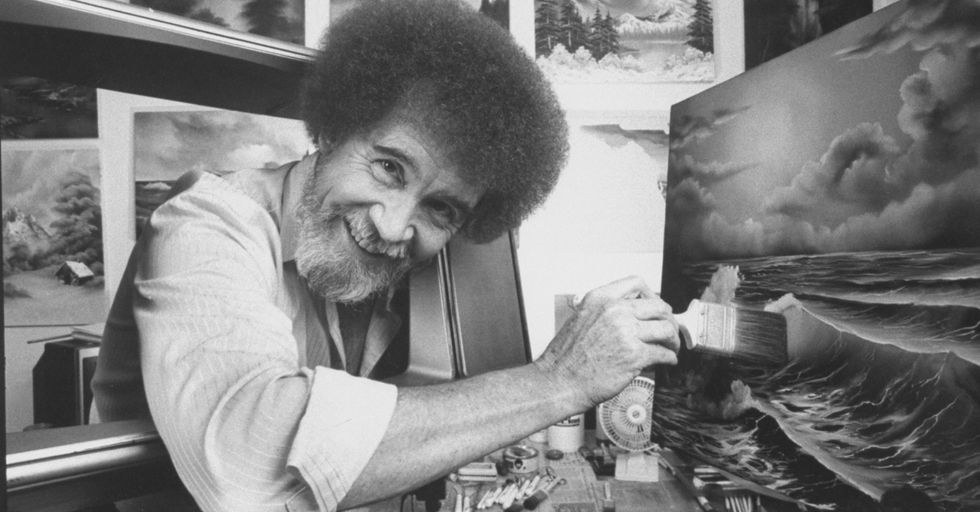 If you don't know who Bob Ross is, it's about time you do, because he might change your life forever and for the better.

Bob Ross has become a household name for his amazing paintings, inspirational videos and quite frankly, his unique demeanor. Some people call his creative little sayings his "Bob-isms" because they are so quirky and well, kind of random. Although Bob passed away in 1995, his videos and paintings are still known and loved by many.

There are no crazy gimmicks, no insane videography skills or loud music. What's so great about Bob is his simplicity and the purity in what he does. And he's actually an amazing painter. But there is more to the man than just what exists in his YouTube Video. Let's get to know the real Bob Ross because there is so much more to him than just his fluffy clouds and fluffier hair.

Yes, he's a painter who is incredibly patient and encouraging while teaching you how to paint an autumn sky. But, what is behind his curly hair, kind brush strokes, and all those happy little trees?

With 31 full seasons of videos, some reaching over 9 million views, he's one of the biggest faces on YouTube today. The Bob Ross Youtube Channel currently has over 1.6 Million subscribers!

I felt like we needed to start here. Those luscious, poofy curls are caused by (you guessed it) a perm. When Bob was younger, he was looking for ways to save money, so he thought if he got a perm, he wouldn't have to keep paying for haircuts. That's one way to save a few bucks.

2. He actually hated that perm

Annette Kowalski, who we'll be hearing a lot of, was a longtime business partner. She's let others in on the true Bob Ross and said he actually hated his hairstyle after awhile. "He got tired of that curly hair," Kowalski said in an interview about Ross. His perm became his staple look and it was already too late; the people loved it and there was no going back.

Not a fact but he is a style icon I mean this is a LOOK. The denim on denim, the gold chain, the slightly unbuttoned shirt and the glasses. He was really making a statement.

3. Bob was in the Air Force

He served for two decades in the Air Force and retired with the rank of Master Sergeant. Who would have guessed that this gentleman was once an uptight sergeant?

4. He was a perfectionist

"We don't make mistakes, just happy little accidents."  This was a classic Bob Ross saying that was loved by many. But as it turns out, Bob did his best to make no mistakes. The truth is, for every episode, he would have three versions of the same painting. One for reference that sat to the side, the second was the one the viewers saw on screen and the third was a little more detailed and meticulous--its purpose was to keep it with instructional books.

5. Bob was a little bit of a control-freak

"He just wanted things done his way...Do you really think this company would be as successful as it is if he didn't insist that everything was done a certain way?" said Kowalski, his long-time business partner. Maybe he wasn't as carefree as those fluffy clouds but he sure played it off like he was.

6. He was born in Florida but worked in Alaska

Living most of his childhood in Orlando, he was later stationed in Alaska when he joined the Air Force. This makes sense with all mountain scenery and happy, snowy mountains.

7. His voice is so soothing, it actually helps some people with insomnia

You know those apps on your phone where you can listen to rain or waves to help you fall asleep? Well, one app called Calm has the option to hear Bob Ross tell a short story with his lovely voice that's supposed to help you fall asleep quicker. This sounds a little weird, but hey, whatever helps you get you to sleep!

A lot of his videos feature little creatures, like raccoons and owls. Friends and family say his love for animals started at a very young age. I mean, look at him with this baby deer. He's like the deer whisperer.

At one point, Bob thought about stepping away from painting to start a TV show called "Bob's World" where he wanted to teach kids about animals and wildlife. I am continuously amazed by this man.

Look at this squirrel

Okay, 30 seconds into this video Bob starts bottle feeding this precious squirrel. He named this squirrel Peapod (okay, so cute) and sometimes he would sit in Bob's pocket while he painted. Yes, he might also be a squirrel whisperer.

10. His voice wasn't always so soft

As a Master Sergeant, Bob was basically in charge of yelling all day, at everyone. He was that guy who screamed for you to get out of bed, to do 100 pushups and to scrub the floor. "The job requires you to be a mean, tough person. And I was fed up with it," Bob said in an interview. "I promised myself that if I ever got away from it, it wasn't going to be that way anymore."

Bob used to paint on golden pans when he was in the Air Force and would sell his work for a quarter. Today, one of his painted pans was sold for almost $9,000 on Ebay.

12. His student became his manager

Annette Kowalski, who I mentioned at the beginning, originally went to one of his painting courses when he was doing small groups. She thought that what he had was unique and more people should know about him. It's Kowalski that many people accredit for his original fame. She has a great eye for talent I can tell you that for sure.

Bob had his show "The Joy of Painting" air on PBS, which reached quite a large audience, which means he should have been rolling in the dough, right? Wrong. This angel of a man did the series for free! His income came from Bob Ross Inc. which sold products and paints with Bob's name on it.

14. He was pretty damn fast

Bob could film an entire season in about two days. You read that correctly. Two days. That's a lot of painting and playing with squirrels.

His shows aired all over the world, but for some reason, Japan was particularly fond of Bob. His show aired twice a day there and had high ratings. They missed out on his beautiful voice because they dubbed over it in Japanese but his amazing artwork was still shown. He once visited the country and was mobbed by his adoring fans.

16. Other artists were not big fans

Bob had some serious haters. Some artists were pretty open about their opinions on Bob, saying his work was "thoughtless" and that he was "a commercial exploiter". Bob kept doing his thing though and all the more people loved him for it.

17. There were many late night rehearsals

He'd stay up all night and rehearse what he was going to say in his videos. His "happy little tree" and other quotable comments were thought up prior to filming.

18. He stayed away from painting people

The common theme in all his paintings is nature. It is rare to find a Bob Ross painting that was of an actual person.

19. Not all his viewers were painters

Many people who tune into "The Joy of Painting" weren't always watching with a paintbrush in hand. A lot of his viewers were just that--viewers. His series was entertaining enough to watch without actually engaging the artistic adventures with him.

Someone did an actual statistical breakdown of Bob Ross' work and found that 91% of his paintings included at least one tree. Where there was one tree, there was a 93% chance that he'd paint a friend for his tree. You know, because trees don't like to be lonely.

He's absolutely right. Branches don't like to be alone.

21. There might have been a Bob Ross video game

Yes. A Bob Ross video game. All the painting you can imagine on your handheld game controller. Much cooler than just using the "paint" option on your parents desktop computer. This is definitely something I would have put on my Christmas list.

Okay, is he a saint? I am becoming more and more certain that he really is. So, where did they all go? Most of them were donated. I know, so touching. PBS would auction them off to help with fundraisers, and the rest were held onto for safekeeping.

Meet Steve Ross. Steve made occasional appearances on the show with Bob and would sometimes be a guest host where he would paint beautiful lakes and also had equally as beautiful hair. This family has some good genes.

In New Smyrna Beach, Florida, there is a Bob Ross Museum that teaches art workshops inspired by the man himself. The museum has over 300 original art pieces that PBS donated. If you're a true Bob Ross geek, you will find that this might actually be your own personal heaven.

25. There is a Bob Ross action figure

Okay, I don't know if these Bob Ross facts are getting to me emotionally, or I just have a shopping problem but either way I think I know my next Amazon purchase. This is just too good. What if one day this action figure is worth as much as Bob's paintings? I think I'm on to something here.

Yes, this man was an absolute legend. It's just a fact. Share this article with your artistic friends, or your non-artistic friends, Bob welcomes all of you. Grab your paintbrush and turn up the volume, because Bob wants your life to be as magical as all his paintings are.