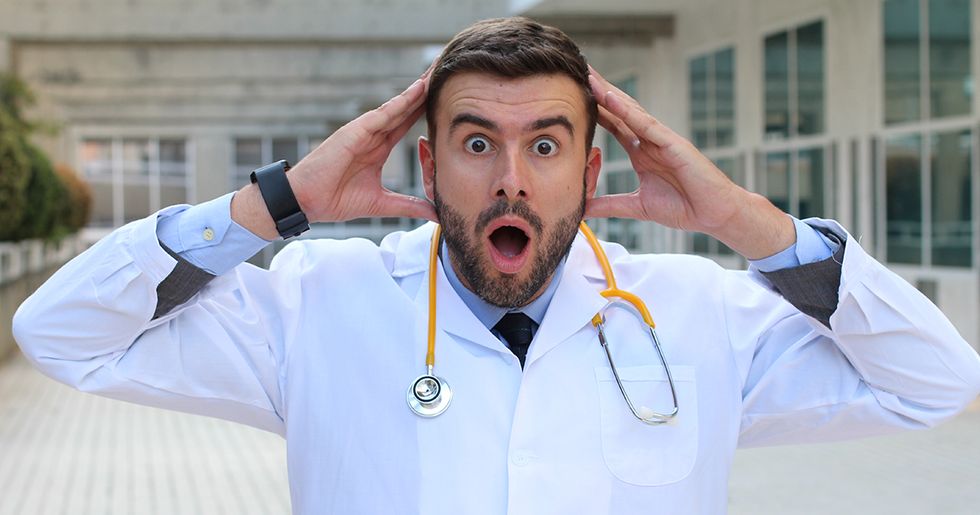 If there's one thing that we can all confidently say about doctors, it's that they have some wild stories. Whether we're talking about objects that have ended up inside of body parts or the absurdly long hours they had to pull as they were starting out, doctors can always one-up your crazy stories.

But the one thing we DON'T want to hear from a doctor is that sometimes they have no idea what they're doing. Unfortunately for us, doctors are human which means that there are times where they feel a little bit lost at work. In fact, sometimes all they can think is "oh god, no one ever taught me this in medical school." While it might be horrifying to imagine your doctor saying that to you, it's hilarious to hear it about the weird patients they've had to treat.

So sit back and relax to discover what moments inspired our doctors to wonder..."what on earth am I supposed to do now?"

It started out innocently enough with a little question from Redditor skubaloob. "Nurses and doctors of Reddit: what is your ‘they never taught THIS in school’ moment?"

Things started out with a bang with some concerning facts about dead bodies, like the fact that they can fart. Hard nope from me.

There were some obvious themes...

Unsurprisingly, poop, farts, and other bodily fluids featured heavily in many of these stories.

There are so many things that can go wrong with pooping.

Including not pooping for a FULL YEAR. That's wild.

Of course, the life of a nurse holds a lot more challenging situations than just poop, and many of the stories expanded from the silly to the truly challenging.

When you just want to do your job...

Many of the more serious stories focused on what nurses need to do to survive their jobs. And yes, sexual harassment is a normal part of that job.

All the rules apply to you too!

Self-care is also vitally important for anyone in a medical profession, but see if any schools teach you how to take care of yourself in addition to your patients.

People can be MEAN.

Because not only are you working incredibly hard, dealing with death on a regular basis, and getting up close and personal with some of the grossest parts of the human body, you have to do it all while family members and patients yell at you.

It's not just the patients either.

Doctors, nurses, and other staff can also make your life hell.

This one's impossible to teach...

Of course, the most obvious and impossible answer was how to deliver the worst news to a family. There is no right answer here.

Other stories were entirely practical.

A medical school can't get to absolutely everything, so some of the stories were about the tricks people picked up on the job.

Some of the tricks you'd never even imagine.

I had no idea there was a "right" way to let someone squeeze your hand.

You can also learn from the patients...

Especially when it comes to the less than savory things they get up to.

People's behavior doesn't always fall into medically diagnosable patterns, but you can bet the nurses know about it, like this tendency for elderly folks to become more disoriented later in the day.

Nurses have to do some weird stuff.

I doubt anyone was dreaming of replacing fake eyes when they applied to nursing school.

I cannot imagine, and I do not want to imagine.

It always comes back to poop, doesn't it?

No amount of training would ever prepare me for an incident like this.

If you thought all the bodily fluids were human, think again.

At least some people can keep a sense of humor.

r/AskReddit - Comment by u/diggleblop on ”Nurses and doctors of Reddit: what is your ‘they never taught THIS in school’ moment?” from AskReddit

Apparently, that's the only way to survive because being a nurse is DISGUSTING.

A good patient is the best teacher.

Especially when they know their own body and needs better than anyone else.

The best stories might be the straight-up weird ones.

That is NOT normal.

There are always odd medical cases.

I'm not sure if it would be great or awful to pee beer.

Some people do WHAT?

r/AskReddit - Comment by u/throwaway61419 on ”Nurses and doctors of Reddit: what is your ‘they never taught THIS in school’ moment?” from AskReddit

Nope, nope, nope! Hard pass, I do NOT want to be involved in any surgery during which the patient is screaming.

How could we finish this topic without getting into the world of genitals and butts?

There are so many exciting (and unique) stories.

When you're up close and personal who knows what you'll see.

Or what you'll set off, am I right?

We learned about many body parts in med school.

But we never learned about butt eye.

We're all learning something today.

I did not need to know about scrotal edema but here we are, and I think we're all surprised.

We should probably teach all people about this one actually.

Imagine your genitals swelling with NO WARNING.

Our medical professionals are out of patience for butt stuff.

Seriously you guys, stop putting stuff up your butts.

But nothing will ever compare with this classic.

Where else would a crack pipe go?