Real-Life Black Magic That Will Make You Go 'Wait, What?' | 22 Words 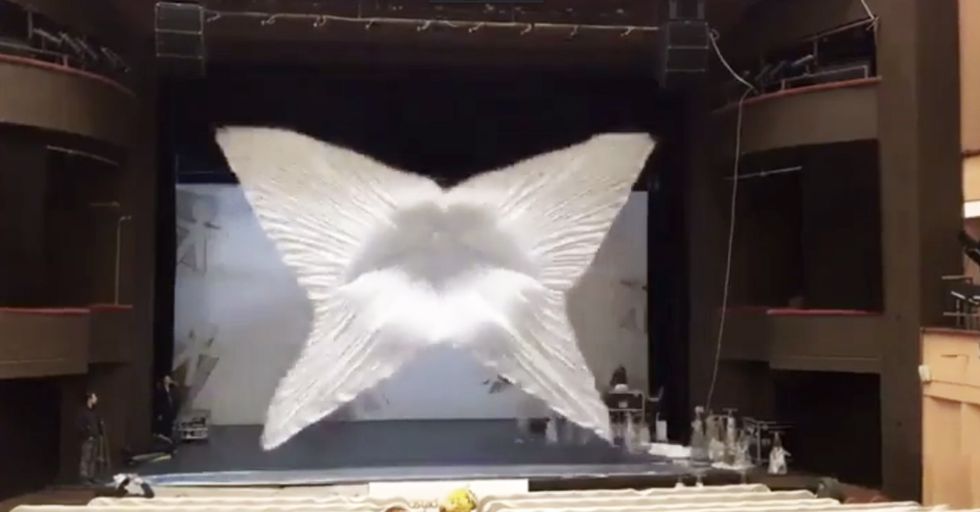 Real-Life Black Magic That Will Make You Go 'Wait, What?'

Since its advent, the goal of science was to explain the world around us; to observe and catalog and hypothesize and, slowly but surely, get a handle on the forces working all around us. But there are limits to science, and one of the clearest examples of that is black magic.

Yes, black magic — the unknowable, unquantifiable, utterly stupefying force that makes things act against science; indeed, against God! Black magic is the lifeblood of the unabashed magician, the fringe engineer, and the clandestine sorcerer.

This Reddit forum catalogs all these instances of the bizarre and unexplained, and now, we've selected the best of the best examples of this dart and forbidden art. You may think you know how the world works, but trust me, friend, you have no idea. Read on to have your understanding of the known universe shattered...

Where does it go to?

This Redditor's sister created what can only be a window into another dimension. What appears to be a flat disk opens up into infinity. We should all probably begin training to fight whatever alternate universe creatures will come out of it.

It used to be, a man could look at a cube and understand how many cubes would fit inside it. Now we've got cubes somehow packed with infinite cubes, and I'm over here wondering if this is how my grandpa felt about iPads.

A haunted cat toy ate all the orbs.

The Reddit post talks about the refractory index of these bubbles and the water, and that's the scientific explanation of what's going on here. And yet, I've decided that the cat toy has absorbed all those orbs, and is now that much more powerful.

Wizards walk among us.

If the Harry Potter books have taught us anything, it's that this man is about to be dragged before the Ministry of Magic for violating the law preventing wizards from showing off their powers before Muggles.

Is he immune to thermal damage?

If this were a game of Dungeons & Dragons, you just know this guy would be diving into volcanoes and searching for treasure. Dungeon Masters hate him!

But where is the string now?

If you rip your shirt, you have to accept that there's going to be a big ugly stitching line when it's all patched up. But somehow, these black magic-wielding seamstresses have made their threads invisible.

Where to even start?

Is this a painting? A sculpture? A window into another world? A city trapped in a painting, like Superman's lost city of Kandor? Or am I just imagining this whole thing? Is the black magic in my eyes?

The image was just there.

One thing my grandfather always told me — don't trust a TV if you can walk around to the other side of the screen and can't see the image. In his later years, my grandfather was... not well. We think his terrifying encounter with the iPad broke him.

This is unlike any sand I've come across in my travels.

Is this weirdo sand sand, a solid, or water, a liquid? Because if there's one thing that bothers me, it's indecision. So pick a state of matter and just be confident in it!

It's like trying to plug in a USB thumb-drive — wrong every time.

You know what I'm talking about, right? Whenever you try to plug in a USB thumb-drive, it's always upside down, no matter how many times you turn it over? I can't imagine how frustrated I'd be if I was addicted to plugging in that USB thumb-drive.

A weird use for your telekinesis powers.

So we've got a member of the X-Men here, using his mutant ability to make playing cards do what he wants. Personally, I might figure out a different way to use that power than making cool little GIFs for Reddit, but hey, I'm not judging.

Oh, sorry fireworks, I didn't get you anything...

Aw, it looks like the fireworks are trying to give me a present! But as my grandfather always told me, never accept a gift if it's full of black magic. We think that's why he threw the iPad we got him in the trash.

The building must've gone back in time and dated its own mom.

Do you remember that? In Back to the Future? When Marty McFly started disappearing when his mom was all getting into him in the past? That still infuriates me, because it is not how time-travel would work.

Just gonna say it: that gap was too small. That cat's a witch.

I know cats are wily; that their bodies are loose and pliable. But there are still the laws of physics to consider, and this cat should not, under any circumstances, be able to fit through that gap.

I think you can get that gun in Perfect Dark on the N64.

That circular blast coming from the sci-fi pistol is so cool, it makes me want to load up with plasma grenades and energy swords and go fight a massive war against space aliens.

A table that contains the entire world...

If the point of a coffee table is to set your drinks down while you watch TV or chat, your guests may not be comfortable with a table that looks like it's deep enough to fit two massive circles made of purple cubes.

A scene from Who Framed Roger Rabbit, 1988

This is ostensibly a statue, but it absolutely looks like a cartoon come to life. I'd be nervous walking around it, though, because who knows when an Acme-brand safe anvil might fall on your head.

No one man should have all that power.

This is unlike any dance I've come across in my travels.

This video appears to be a regular man breakdancing, but then it takes a sharp left turn to reveal itself as a video of a man with the power to instantly re-arrange his molecules.

Best as I can tell, they are pulling a ghost into that syringe.

This Reddit post says the syringe is sucking in "plasma," but nah. nah man. I've seen Ghostbusters. That's a ghost right there. It's sucking up ghosts. And we should all be terrified.

Hey, magic card-wielder? Can you at least do us the courtesy of wearing long sleeves? Then I wouldn't have to question literally everything I know about how the world works.

This is actually a table saw with finger protection — the moment it senses it's about to chop off a finger, it jolts downwards. It's impressive tech, but what I want to know is how does it know the difference between wood and fingers?

All these kids are now scientists.

Were these kids getting a cool demonstration from a cool teacher so as to learn about surface tension and air pressure? Or were they being indoctrinated into black magic? You decide...

But it was Iron Man one second ago.

The midway point where it looks like Tony Stark but with Iron Man's eyes freaked me out enough that I actually started to sprinkle holy water on my computer monitor.

All right, who bewitched my favorite tumbler?

Check out the way this Jello heals itself back together after it gets sliced up. If that process could be understood and made viable for humans-- no. No, it's not worth the risk. We could gain immortality, yes, but potentially at the cost... of our very souls.

Now the ghosts are just getting cocky.

This video claims to show a curtain-raising device in action, but come on. That's clearly a ghost escaping. And what makes it even worse is how audacious
this ghost is — it's not even a little transparent!

I, for one, welcome our new silver, levitating overlord.

This guy is floating and he's made of silver. Just one of those traits would be enough for me to offer him a tithing of 10 percent of my income.

Someone broke the chicken.

Like it was glitching out in a video game, this chicken's body is moving while its head remains completely stationary. When the owners called tech support, they just told them to unplug the chicken and plug it back in again.