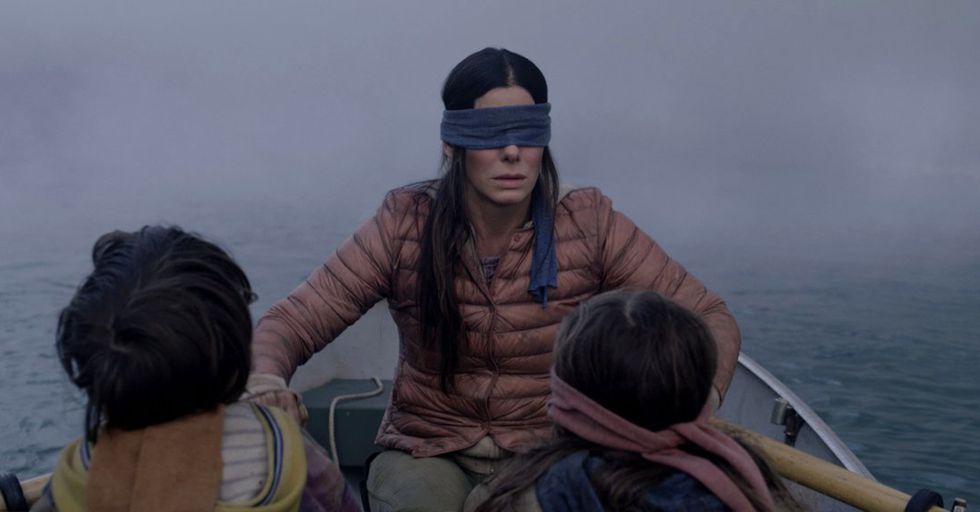 Bird Box needs no introduction. If you haven't seen it, go ahead and excuse yourself from society because this is the most important movie currently, and deserves your attention. But lately, it's been getting some negative attention, and not because of the scary monsters.

Whether you loved it or hated it, the fact of the matter is that Bird Box is truly a movie that defines our generation, especially since it is a Netflix original movie. Sandra Bullock stars in the film, which has a few pretty disturbing scenes and an overall troublesome storyline. But don't get it twisted, it wasn't the blood or the gore that is causing some heads to turn, it's one very specific scene that involves a train crash.

Fans are criticizing Netflix for including this train scene because it uses real footage from a train accident that happened in 2013. People have expressed mixed emotions about this scene, but Netflix is standing its ground.

Go ahead and take off your blindfold.

The Netflix movie that almost broke the Internet was a quick sensation that captured viewers because of its dark and mysterious plot line.

The numbers prove it.

I don't think they expected it to be such a hit and so fast, but it definitely broke some records. Bird Box had the biggest seven-day viewership of any Netflix movie, and they claim that it was viewed by 80 million households in the U.S. within the first month of the release.

The Internet exploded in excellent memes.

Whether they hated it or loved it, everyone was tweeting their reactions to the flick with some of the most hilarious memes the Internet had ever seen.

I mean, it swept the Internet off their feet.

It was all everyone was talking about and every meme was clever, even though there were hundreds of them.

It left us all pretty emotional.

I definitely cried at the ending in the midst of the emotional roller coaster that is the entire movie.

I mean, literally everyone saw it.

Even busy celebrities had time to see this movie that was drawing so much attention from everyone.

Netflix was soaking in all the love.

Update: This number is now more than 80 million. Congratulations to my HEROES, Sandra Bullock and Susanne Bier https://t.co/yNCTSuZoKb
— NetflixFilm (@NetflixFilm)1547759186.0

There was so much love to go around and so much attention – everything was going great. Netflix was really hitting a peak in their business.

Whether you loved the ending or absolutely hated it, that's not what made this movie a touchy subject. There was one particular scene that caused quite a few viewers to get upset.

An intense moment that was made even more intense.

As the movie progressed, chaos spreads across the world. One scene in the film shows a train crash that seems a little too real, and that's because it was.

No special effects were used.

Sandra Bullock turns on the TV to see the news report that madness is spreading all over, and flashes of a train accident show on screen, but these images were real and showed a horrible accident that happened a few years back.

This was a tragedy that spread all over the news.

In 2013, an unattended 74-car train filled with crude oil derailed, leading to an explosion in the middle of Lac-Mégantic, a small town in Quebec, Canada.

It was truly a tragic event.

47 people lost their lives due to the train derailment and over 30 buildings were destroyed from the fires. The whole town was affected greatly by this tragedy.

But Netflix easily got a hold of the footage.

A third-party company licensed the footage to Netflix, giving them the legal rights to the images in Bird Box. Those scenes weren't at the forefront of headlines when the movie was first released, and now, people can't stop talking about it.

@JustinWWaldrop @verge @TRVLRSseries The point is, don't use footage of a disaster where people died in your shlock… https://t.co/sL0QI2K457
— crass iron skillet (@crass iron skillet)1547747102.0

People called for the scene to be removed from the film because of insensitivity towards the tragedy and to the families that lost loves ones in the accident.

There was a wide range of reactions to this scene and some people couldn't see eye to eye.

@kurrda @nytimesarts It’s a disaster where real people died and it shouldn’t be used to sell or make a movie scene
— Former Leafs (@Former Leafs)1547764871.0

People debated on Twitter whether the scene should be removed or not, but there were mostly disagreements on the topic.

It got the attention of the mayor.

"The mayor of Lac-Mégantic, a #Quebec town that suffered from a tragic train derailment and explosion that killed a… https://t.co/RtXuTp3isE
— Lana Gay (@Lana Gay)1547759151.0

The mayor of Lac-Mégantic spoke up saying "You can be sure we are going to follow up on this, and our citizens are on our side." So what did Netflix have to say about this?

Netflix is standing their ground.

Despite the uproar, Netflix did not budge on their decision to include this scene in the movie.

Netflix was putting on a blindfold to the online protesting.

In spite of protests, Netflix will not remove real-life footage of the fatal Lac-Mégantic rail disaster from Bird B… https://t.co/hIpwmE4wQ4
— The Verge (@The Verge)1547746276.0

Netflix turned a blind eye to the haters and didn't pay too much attention to the negative comments.

Some fans were turning their heads, too.

For those who agreed with Netflix, they seem unfazed by this scene, saying that Hollywood does this often.

Some fans wrote that adding this scene, which was only on screen for about 3 seconds, didn't deserve all this negative attention.

A lot of fans did agree that including this scene was pretty messed up.

Netflix's blatant passive attitude towards this scene was obvious and a lot of fans thought it was insensitive.

This guy called out Netflix for using the footage to gain money and attention, at the risk of hurting families and the people affected by the train accident.

People felt conflicted about this.

It opened up a conversation about how other movies have enhanced their storylines by using real footage, that might not be in a way that honors the people affected by the tragedy itself.

Is it necessary to tell a good story?

One professor believes that if real footage is being used, it should be pertinent to the storyline, not for random reasons.

There was still no budging.

Netflix did speak up about the Bird Box Challenge.

Not one of our best challenges, but people started participating in the #BirdBoxChallenge where they were blindfolding themselves and trying to do everyday activities.

Because people were stupid enough to blindfold themselves while driving.

A teen driver in Utah did the #BirdBoxChallenge while driving. They ended up getting in a pretty serious car accident, and luckily she survived the crash.

And a lot of people got hurt, like this poor kid.

I know people will do a lot of things for laughs, but this wasn't the Internet's best challenge.

This isn't the first time this footage was used.

Travelers, a science fiction show on Netflix, also used footage from the Lac-Mégantic train accident and received criticism for including it.

Time to do some re-editing.

The difference with this situation is that Travelers took the footage out, and issued an apology. Carrie Mudd, the president of the studio behind the show, spoke on the issue: "We sincerely apologize and had no intention to dishonor the tragic events of 2013... We are already working to replace the footage in the show."

'Bird Box' really made a wave.

Even with the criticism of this scene, the film was still a huge success and even those who didn't agree with the use of the footage still engaged in conversation about it, bringing all the more attention to this movie.

We can all agree that the memes were gold.

Twitter really did us all a service by providing some of the most hilarious memes ever made from a movie.

It was hard not to laugh at all of these.

This is also Netflix producers looking at each other choosing who is going to speak up about the Lac-Mégantic scene when asked about it online.

This movie had everyone screaming.

Whether they were screaming in joy or frustration, they were still fully engaged.

You can keep your blindfold on if you want.

Netflix still reigns as the ultimate streaming platform and they basically just showed us that they can do whatever they want. Whether you agree or disagree with their decision, it's still worth engaging in the conversation, and sharing this article with your friends to hear their opinions!