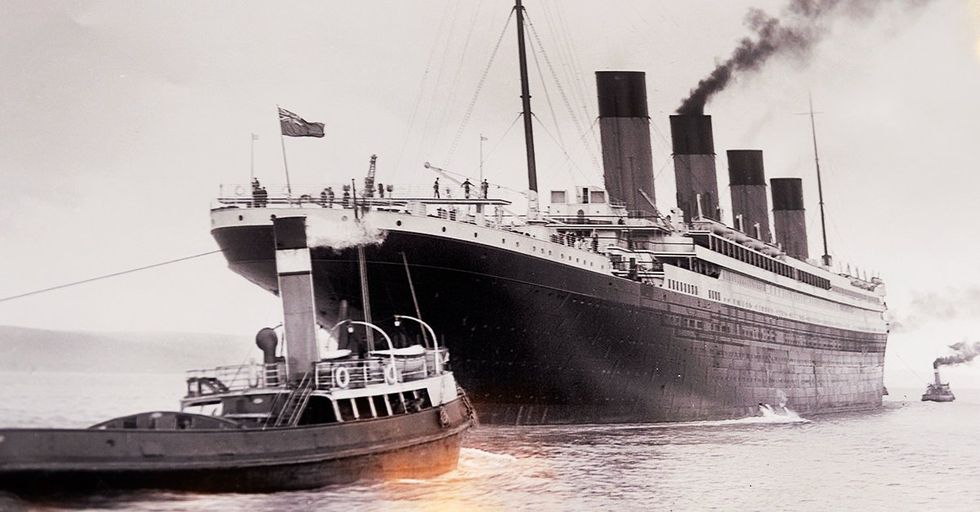 You probably remember the craze that the Titanic film started.

If you don't remember it, the fact that — 20 years later — the film is still the second-highest-grossing film of all time should clue you into the fact that people were really, really behind-the-scenes facts about the movie itself into the movie.

We've already shared with you some, but there's so much out there that a single film couldn't possibly cover.

With that in mind, here are 18 fascinating facts about the ship whose tragic story we just can't seem to get enough of.

1. For our first Titanic fact, we have to go quite a ways back.

Back to before the ship was even built, as a matter of fact. In 1898 (14 years before the Titanic sank), Morgan Robertson wrote a novella titled The Wreck of the Titan: Or, Futility about a fictional ocean liner that sinks due to a collision with an iceberg. In the book, the ship is described as being "unsinkable" and doesn't have enough lifeboats for everyone onboard. The similarities are pretty uncanny. Even downright spooky.

2. There were a lot of rich and famous people who almost were on the Titanic's fateful maiden voyage.

The Hershey’s chocolate founder Milton S. Hershey had a ticket but did not board the ship. Guglielmo Marconi — the inventor of the telegraph — had been offered free passage on the Titanic but instead boarded the Lusitania (a ship that also sank, though not during Marconi's voyage). J.P. Morgan was set to have his own private suite and promenade on the ship but canceled at the last minute to remain at a resort in France. Alfred Gwynne Vanderbilt was one of the richest men in America who also had planned to sail on the Titanic but decided not to for some reason. Unfortunately, Vanderbilt died three years later on the Lusitania. The American novelist Theodore Dreiser also planned to board the Titanic but was talked out of his plan by an English publisher who advised him to take a cheaper boat.

3. Charles Herbert Lightoller was the second officer aboard the Titanic.

He was also the most senior member of the ship's crew to survive the sinking. During World War II, Lightoller provided and sailed as a volunteer one of the "little ships" that rescued the stranded Allied soldiers at Dunkirk.

4. Isidor Straus — co-owner of Macy's — died aboard the Titanic.

He and his wife Ida were traveling back from a winter spent in Europe when the ship struck the iceberg. Ida refused to leave Isidor and get into a lifeboat. She gave her maid her fur coat, stating that she would not be needing it. She's reported as having said, "I will not be separated from my husband. As we have lived, so will we die, together." They were last seen on deck together, standing arm-in-arm.

In fact, this couple (from the film) was meant to represent the Strauses:

Isidor's body was recovered, brought to Nova Scotia, and eventually interred in the Straus mausoleum in Woodlawn Cemetery. Ida's body, on the other hand, was never found. Her family elected instead to collect water from the shipwreck site, put it in an urn, and place the urn inside the same mausoleum.

5. Robert Ballard discovered the Titanic wreckage in 1985 — but that wasn't exactly what he was hired for.

Ballard had actually been hired by the U.S. government for a top-secret mission to use an underwater robot he'd invented to find two nuclear submarines that sank in the 1960s. The Navy made a deal with him: Find the subs, and then we'll fund an expedition to find the Titanic. And that's exactly what happened. He found the subs with 12 days left in his contract with the Navy, then found the Titanic afterward.

6. Ballard's 1985 discovery confirmed what many survivors had insisted since the Titanic sunk.

Survivors had given their accounts saying that the ship had split into two pieces during the wreck, but many dismissed them. Imagine researchers' surprise upon finding they were completely correct in their statements.

7. The Titanic had several young boys as crewmembers.

They were known as bellboys and were sometimes as young as 14 years old. Unfortunately, none of the bellboys survived the sinking.

She was only 2 months old when she and her family boarded the Titanic. After the ship struck the iceberg, Millvina, her mother, and her brother were placed on Lifeboat 10 and were some of the first third-class passengers to escape. Her father, however, perished on the ship. After Millvina died at the age of 97 in 2009, she was cremated, and her ashes were scattered from the Southampton docks from which the Titanic had set sail.

9. The crow's nest crew had no binoculars.

Just before the Titanic's maiden voyage, the White Star Line reassigned the mariner David Blair to another ship. In his hasty departure, he accidentally kept a key to a storage locker aboard the Titanic. It's now thought that that storage locker held the binoculars meant for the crow's nest.

10. Here's a picture of the actual iceberg the Titanic collided with:

It was found by another ship the morning after the Titanic sunk. It had a large swatch of red paint scraped onto it showing where the Titanic had struck.

11. You should definitely know about Charles Joughin.

He was the chief baker on the ship. He actually survived the sinking in the most incredible fashion. After the ship struck the iceberg, Joughin began tossing chairs overboard to be used as flotation devices. He also drank a lot of the ship's liqueur storage. As the ship went down, he said he "rode it down as if it were an elevator." He then spent several hours in the freezing cold water and lived to tell the tale.

Actually, Joughin does make an appearance in one of the film's deleted scenes:

(Obviously, this particular scene was cut, but you see him again as Jack and Rose climb onto the railing as the ship goes down.)

12. Masabumi Hosono was another Titanic survivor.

He was a Japanese civil servant and the only Japanese passenger on the ship. Sadly, after surviving the ship's sinking, he found himself condemned by the press, government, and the public as being cowardly for not going down with the ship.

13. The actual violin played onboard the Titanic was recovered from the sea.

The violin played by Wallace Hartley was thought to have been lost in the sinking, but in 2006, a woman found it in her attic. After seven years of testing, researchers determined that it was, in fact, the actual violin upon which Hartley famously played "Nearer, My God, to Thee" as the Titanic sank. Speaking of that particular hymn...

12. It most likely wasn't the rendition you heard in the film. Instead, it was probably this one:

There are actually several versions of the hymn "Nearer, My God, to Thee," each sung to a different tune. Wallace Hartley's family insists he most likely instructed the band to play the "Propior Deo" version of the song linked above, as his father — who was a Methodist choirmaster — used that version at church.

13. The first Titanic film screened only 29 days after the ship sunk.

It was called Saved from the Titanic and its leading lady — Dorothy Gibson — was an actual Titanic survivor. To add to the film's authenticity, Gibson wore the same clothing she had been wearing when the Titanic sunk. She reportedly suffered a mental breakdown while filming.

14. The Titanic had four smokestacks, but only three of them functioned.

The first three smokestacks were actually connected to the furnaces that produced the smoke, but the fourth one wasn't. The fourth stack functioned mainly as an air vent and as a way to add some symmetry to the ship's overall look.

17. Artie Moore heard the Titanic's distress calls from 3,000 miles away.

Moore was a Welsh wireless radio operator who, with his home-made radio equipment, picked up the Titanic's distress signals. He relayed the messages to the locals, none of whom believed him. Two days later, news of the Titanic's sinking made it to Wales and Moore was vindicated. Marconi (the inventor of the telegraph) heard of Moore's actions and offered him a job on the spot.

18. It's possible to visit the Titanic wreckage yourself.

All you have to do is buy a ticket from the London-based travel company Blue Marble Private for a 10-day mission. It'll cost you, though. $105,129 per person, to be exact.