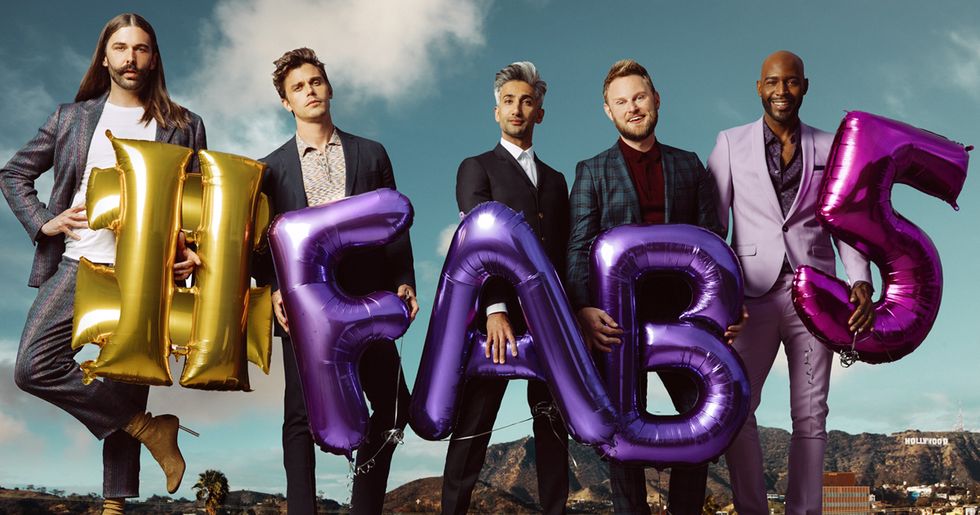 Have you watched the reboot of Queer Eye yet? If not, what are you waiting for? The early 2000s show is back and honestly, better than ever. You will probably never see a more wholesome thing on TV and basically, every single episode will make you melt into a giant pool of tears.

The guys are so warm and genuine it's no wonder their new subjects open up to them immediately as they help them upgrade their house, their clothes, their cooking, and most importantly: their confidence.

But what do actual men think of the new series? Have they learned anything they didn't know before? Here are what men are saying about the reboot and how it's helped them in their own lives, even without the hands-on guidance of the Fab 5.

One Reddit user realized Queer Eye was about more than just making a person look better, it was about teaching men how to build positive friendships.

"For me, the show isn't about the makeover at all (and they actually kind of downplay that element). The show is about 5 really open, caring guys who parachute into someone's life and show them what having real friends and real emotions is about. I realized after the first episode, that this show is actually demonstrating what positive masculinity is all about. It's about what friendships should be." -MaxSupernova

Another man pointed out that this show was much kinder than its predecessor.

"One difference I noticed right away was that the old show, there was a lot of mean-spirited teasing? It wasn't overly harsh or anything, but a lot if the show was poking fun at the guys fashion sense, and trying to change them. This reboot is so much more wholesome. You can tell that the fab5 really genuinely care and are trying to bring out the best in these men by helping boost their self worth." -chancellor_gowron

This man learned not to judge other people for how they look.

"I really liked how in the first episode, the guy said, "Well, I have lupus, so that makes my face red," and without batting an eye, the long-haired one nodded and recommended a makeup tool-thingy for redness. There was zero judgment or shying away. Small moment but I thought it was so cool." -ynocfyinco

Some men have found the series to be a great way to show that gay men are as multi-dimensional as the rest of us, despite what we may have previously seen on TV.

"...what makes this show so special is that they don't play into "gay" stereotypes. In a later episode, they help out a gay guy who's very reserved, and they have a whole conversation on how being gay doesn't mean one thing or another, and they point to themselves as examples. Jonathan is quite flamboyant and effeminate, Koromo is a 6ft black suave dude and Antoni is a (very beautiful) normal dude. It's super refreshing to see gay men shown as diverse and more than the "sassy accessory"." -caca_milis_

Some men thought they did see stereotypes in the show, but the show was able to go beyond the stereotype and show who the guys really were.

"They absolutely can play into stereotypes, however unlike traditional stereotypes they also have depth to their character and personality. The flamboyant gay hairdresser that frequently says "Yassss Queen!!!" Tell me that's not a stereotype. However, it's also part of who he is." -DasFunke Read more reactions on the next page!

This person said the show helped he see that men can be seen as attractive and desirable.

"It seems to me that men (especially straight or "straight-passing" men) aren't typically given social permission to feel attractive and desirable. They're often cast as the pursuers and this is just as unfair as classing women as the pursued. To have five people come into their life and give them that permission, to tell them that they are, themselves, worthy of desire and appreciation, has got to be a healthy thing." -StaubEll

This man learned to give his male friends compliments.

"...one of my favorite side-effects is that it gives me the freedom to be complementary to my male friends with them knowing I'm not trying to hit on them (to be honest, I think I probably sound like someone's mum). Just little things like 'that's a nice shirt' or 'Have you had your haircut? It looks great!' or when went to a wedding 'oh you all look so handsome in your suits.' It's the same kind of things I'd say to my female friends, and I think men deserve to hear it too. I think it's nice for them to hear it and important for them to know that their efforts are recognized." -FridaKahloMarx

The show made this guy realize that women compliment each other all the time, but men rarely do.

"...realized that it's incredibly common for groups of girls to "gas each other up" so to speak, but that many adult men, particularly those more conservative/traditional bubbles, can go their whole lives without receiving that kind of warmth and support. It demonstrates how just a small self-esteem issue can snowball into a years-long emotional rut that you don't even realize you're in. And it also shows how just a little emotional validation from your peers can give you the strength and confidence to be vulnerable and try new things." -meakel

The show has made some men feel like they deserve to take care of themselves.

"I've really enjoyed the show. In fact, I find it inspiring. I'm one of those guys who thinks he doesn't deserve anything. I don't deserve decent clothes because I'm fat, I shouldn't bother making my apartment look nicer because no one ever comes over, no reason to learn how to cook because I'm just cooking for me. But the show has inspired me to make something of myself for myself." -TheBadWolf

One thing men like about the show: it deals with mental health issues.

"I enjoy how mental health and personal care are top priorities for them. I enjoyed very much looking forward to more episodes." -diorblack There are a lot more things to love about Queer Eye, keep reading to find out!

Some men said they liked reality shows that encouraged positivity.

"I really appreciate that this show and Great British Baking Show are so popular on Netflix. Both feature all different types of men doing positive things." -Fat_Fred

For some men, they were really helped by the fashion tips.

Some guys even developed an interest in makeup!

"The first episode introduced me to green concealer and has actually made me interested in makeup now!" -macmillan23

This guy learned that there is no definition for "cool".

"Too often a "makeover" says "You need to conform to what is popular. You're just not cool enough." Queer Eye says "You're absolutely awesome! But you're not doing this specific thing correctly. This is what you're really trying to do." And then the guy replies "Oh yeah! That's exactly what I was going for!" It's great for emphasizing that everyone is cool in their own way." -LuxNocte

"If this show doesn’t motivate you to make more of an effort then you’re hopeless. I was in a such an energetic mood after one episode. I was changing my sheets, vacuuming, cleaning my toilet my shower, rearranging furniture. And then I had to try that grilled cheese recipe I saw one episode, which was amazing. I did the whole nine yards. And now I think I’m about to spend a lot of money buying new clothes online haha." -freshestpr1nce So much love for Queer Eye! Keep reading!

For many guys, it's about learning to be confident.

"Recommending to my friends, guys especially. It’s less about style and queerness as it is about people growing into their more authentic self. I’ve teared up through most episodes because of their genuine care and desire to help. How much confidence is built in only several days, it’s inspiring! YOU ARE WORTH IT HUNNY!" -Highonfructose

Some guys learned that what they thought of the South wasn't entirely accurate.

"The Fab 5 are warm, generous, and talented. Possibly my favorite thing about the show is that it's set in Georgia where you'd expect a lot of pushback but, none of that happens. In fact, the straight guys that they help seem like genuinely good guys who are completely open to these gay men." -patush50

For some men, it was permission to spend money on their own style.

"...both incarnations of the show did well - just telling normal people that it's ok to put some time, effort, and money into style." -tectonic9

Some men find the whole damn thing to be inspirational.

"I think I enjoy this show as a straight male more than my gay friends and my fiancee. It hits hard when they break down WHY a guy doesn't dress well or where he's had to put his priorities. Then hits even harder when they explain how the outside world views those priorities. It's incredible, I usually cry, get a couple dress tips out of it, and learn a grooming tip or two. But mostly I watch to see them drastically overhaul someone's spirit." -Daredizzle

Do you love the reboot of Queer Eye?

The Fab 5 is truly helping people be the best versions of themselves. Share this post on social media if you love them, and spread the word!