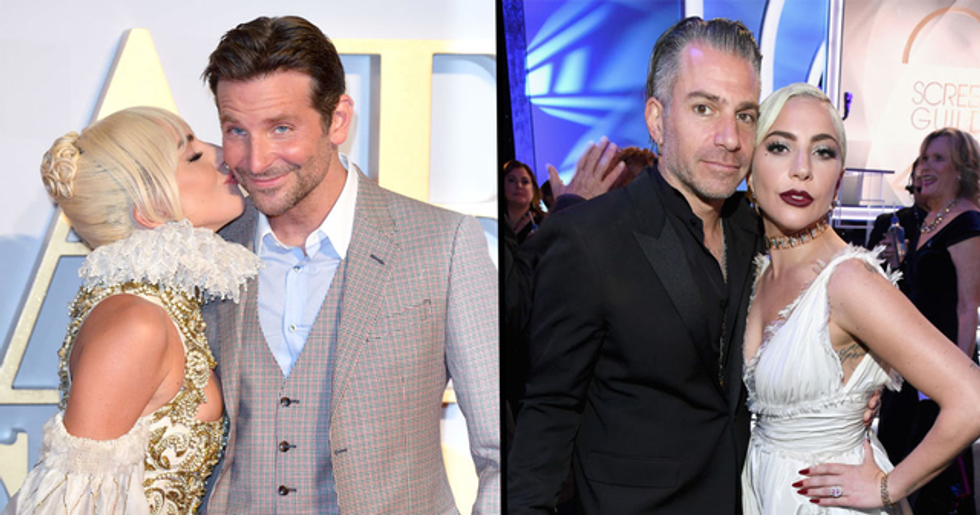 The ill-fated engagement between Lady Gaga and talent agent, Christian Carino, has been one of the most speculated-over in Hollywood. Many had a few conspiracy theories about the breakup, and the vast majority included some sort of secret relationship with Bradley Cooper.

The chemistry between Gaga and Cooper in smash hit musical, A Star Is Born raised eyebrows, but it was the pair's deportment off the screen that really got people talking. The pair often looked incredibly couple-y together, which led many to ask how the stars' significant others were feeling about the situation.

While it seems that Cooper's relationship could weather the storm, Gaga's reportedly broke down early this year. With a lack of explanation for the break up, many filled in the gaps with a Cooper-shaped object. But now Gaga has spoken out about the real reason that she and Carino have broken up - and fans are shocked at the revelation.

Lady Gaga is one the biggest stars of the day.

She released two chart-topping and insanely catchy pop singles, "Just Dance," and "Poker Face," which cemented her name as a pop star to watch.

Since then, Gaga has worked tirelessly to make herself a star.

She's constantly re-invented herself and innovated her career to prove to her fans that she's incredibly talented, and hardworking, too.

Gaga has a close relationship with her fans.

She calls them her "little monsters," and maintains a close and intimate relationship with them, proving that she's grateful for all she has.

Gaga has expanded her career beyond just music.

In 2018, she starred in one of the biggest movies of the year, A Star Is Born, alongside Bradley Cooper.

Ally has an incredibly powerful voice, plus a talent for songwriting - but claims she's been consistently overlooked because of her unconventional appearance.

Jackson is a hard-living, substance-abusing country music star. He discovers Ally in a drag bar, and recognizes her incredible talent immediately.

The two fall in love along the way.

Gaga and Cooper enact this intense, passionate love story to perfection. Many credit their on -creen chemistry with a large portion of the movie's success.

But for some, the two were just a little too believable.

There's no denying Gaga and Cooper sold their love story on screen. But fans have watched closely as the pair interacted off-screen and believe that they've noticed something.

Many believe that there's something between the two.

Fans of the "secret relationship" conspiracy theory point to photos like this as evidence that the love story between the two isn't just confined to the world of A Star Is Born.

Many were absolutely convinced on this point.

There are many very vocal believers who think that Gaga and Cooper are secretly in love, and for some reason hiding that fact from the general public.

It's true that the two do have a remarkable natural chemistry.

This seems particularly obvious during live performances, which many see as massively emotional and romantically intense.

Conspiracy theorists point to other evidence, too.

For example, this tattoo of Gaga's, depicts musical notes spelling G-A-G-A in the treble clef. But the same notes spell out B-C-B-C (or the initials of a certain Bradley Cooper) in the bass clef. Coincidence? (Probably.)

The two also did a jaw-dropping performance at this year's Oscars.

For many, the pair singing the award-winning song "Shallow" was the highlight of the night - and further proved (to some) that the two share more than a professional relationship.

There were some issues with the theory, though.

Like the fact that both Cooper and Gaga were in serious and committed relationships - and not with one another!

Gaga was (until recently) coupled with talent agent Christian Carino.

Here they are pictured in happier times at the Screen Actors Guild Awards, in January of this year.

The pair were even engaged.

As proven by Gaga's enormous (and stunningly unusual) engagement ring. The star didn't miss an opportunity to show off the beautiful jewel, either. Neither would we!

But then reports surfaced that Gaga had broken off the engagement.

And many thought there was one big reason why. A big reason named Bradley Cooper.

The two had seemed on the rocks for a while...

Many drew particular attention to the awkward and uncomfortable body language between the pair at the Golden Globes.

And at the Oscars, it seemed Gaga was targeting her affections elsewhere.

The way she and Cooper performed "Shallow" got everyone talking - even those who'd previously dismissed the "secret relationship" conspiracy.

Here's the performance, if you managed to miss it.

You can judge for yourself as to whether it actually means anything - but there's no denying it appears that sparks are flying between the two.

The speculation got so big Gaga herself had to address it.

She claims in this interview that the performance was an extension of the acting of the movie - saying she and Cooper had "fooled" everyone.

And the real reason for her split from Carino?

Well, it apparently had nothing to do with Cooper at all - and instead was a result of one of Carino's more annoying habits.

Carino reportedly texted Gaga too much.

The frenzied texting was more symbolic of deeper issues in the relationship, like Carino's possessiveness and jealousy.

And if there is another man, it certainly isn't Cooper.

In fact, some reports are claiming Gaga has struck up a romantic connection with old friend, actor Jeremy Renner, who she got close to as her relationship with Carino soured.

Many are pretty impressed with Gaga's reasoning.

It does show her to be a powerful, strong, and independent woman, who's happy to ditch a guy if he doesn't fit into her life. And we love her for it!

Some think Carino has made an obvious mistake.

Gaga even has a song about how annoying it is when a guy texts and calls all the time! Surely he could have taken the hint?

But some are still insistent.

Certain A Star Is Born fans can't seem to let the idea of the secret Gaga-Cooper romance go - no matter how much evidence there is to the contrary.

Either way, it seems like Gaga is doing great.

The star recently celebrated her thirty-third birthday, partying with close friends on a boat in Mexico. Christian who?

With or without a man, it's a good time to be Lady Gaga.

And if she can break up with a guy because he's texting too much, anyone can. Onwards and upwards, we say!