The Real Titanic: Myths About the Fateful Voyage, Debunked | 22 Words 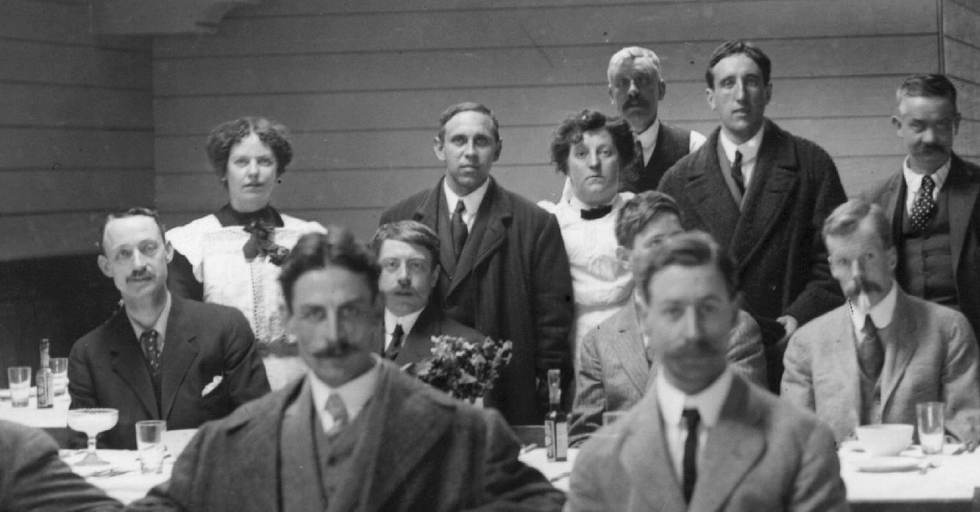 The Real Titanic: Myths About the Fateful Voyage, Debunked

Between classic movies, informational books, and the History channel special, you might think you know everything there is to know about the Titanic. But, even when James Cameron's iconic film Titanic was re-released for the 20th anniversary last year, some people were still shocked to learn that the ship accidentally sank.

Generally speaking, facts about the Titanic are pretty (pardon the joke) rock solid. We know a lot about this early 1900s tragedy. Yet, a number of myths still exist surrounding the epic cruise liner — myths that movies and documentary specials only seem to perpetuate. So we set out to separate the real Titanic facts from false Titanic tales.

Here are some of the biggest tall-tales told about that ill-fated voyage.

No one ever said that the Titanic was “unsinkable."

"So, this is the ship they say is unsinkable."

Those are the words that Rose’s mother utters as she looks up at the ship from the docks in James Cameron’s film.

The problem with this line is that Hollywood has latched onto the iconic quote. But according to Richard Howells from Kings College London, at the time the Titanic set sail, nobody thought this.

"It is not true that everyone thought this. It's a retrospective myth, and it makes a better story. If a man in his pride builds an unsinkable ship like Prometheus stealing the fire from the gods... it makes perfect mythical sense that God would be so angry at such an affront that he would sink the ship on its maiden outing, " he stated.

In fact, when the Titanic set sail, it wasn’t even particularly big news. The spotlight, instead, was on its sister ship, the Olympic. That ship “was painted a light grey purely so that it would look fantastic in the newsreel footage,"  according to John Graves of the National Maritime Museum in London.

In fact, since there was almost no news footage of the real Titanic before it sank, in many newsreels, footage of the Olympic was used to represent the Titanic. “History turned into myth within hours and certainly did days of the sinking," Howells suspects.

Does anyone really know the final song played by the band before the ship sank?

In historical accounts of the Titanic’s voyage, multiple people who were aboard the ship and survived claim they remember the band's final song as the hymn, “Nearer, My God, To Thee." That’s how it was filmed in the 1958 film “A Night To Remember," and James Cameron liked the moment so much, he recreated it almost exactly for his film in 1997.

The problem with that story is, that this how the people who managed to get off the ship remembered it. But the band continued playing long after those people escaped, according to Simon McCallum, an Archive Curator at the British Film Institute. Most accounts actually suggest the band was playing ragtime and other popular music as the ship was sinking.

"The passenger who recalled that particular hymn being played was lucky to get away quite some time before the ship sank. We will never really know as all seven musicians perished - but it's poetic license. ‘Nearer, My God, To Thee’ is such an evocative hymn that works as a romantic image in film" McCallum said.

The Titanic crew was trying to set a speed record

Over the years, people have perpetuated the myth the Titanic wasn’t just trying to cross the Atlantic, the crew was attempting to do it in "record time." And while the idea of a gigantic ocean liner zooming across the Atlantic makes for an exciting story, it is a total lie.

Several facts point to this. First of all, when the ship hit the iceberg, all of the engine’s boilers hadn’t even been hit. Also, the course that the Titanic set sail on wouldn’t be the best for winning an Ocean race. The ship was following a southern route about 200 miles longer than a northern one. This is mostly dues to the fact that it was a smoother sail, which was intended to accommodate the ship’s First Class passengers. They wouldn’t have taken too kindly to a rocky journey.

Interestingly, there were other reasons for the ship’s slow and steady pace — namely, a coal strike in Britain. Coal was expensive, so rather than sink a bunch of money into running the ship at full speed, it made far more financial sense to crawl across the ocean at a leisurely pace.

Look, we love a good drag queen, cross-dressing plot-twist as much as the next person, but this is simply not true. In fact, even though it's a myth, the rumor actually ruined the life of the man who was alleged to have done it.

According to William T. Sloper, he escaped in a lifeboat because he was in the right place at the right time — there weren’t enough women and children to fill one of the lifeboats, so whoever was there at the time got a seat. This is something several other eyewitnesses have verified. Everyone except for newspaper tycoon William Hearst, who was always in search of a good story. His newspapers ran a version of the story that claimed Sloper had disguised himself as a woman to get on board.

But the truth is… Sloper wouldn’t have had to go to such lengths, and as a result of the rumor, Sloper was nicknamed, “skirts" in his social circles for the rest of his life.

Was the Titanic’s captain actually a hero?

Several accounts suggest that Captain Smith was a hero until the very end.

"History records him as dying a heroic death. Statues were erected in his memory. There were postcards produced and stories of him swimming through the water with a child in his arms, saying 'good luck, lads, look after yourself'…all of which never happened," Paul Louden-Brown, from the Titanic Historical Society, explains. He was also a consultant on Cameron’s film.

In fact, very little is known about the captain’s final hours, but one thing is certain. He is largely to blame for the Titanic going down and for hundreds of people dying.

According to reports, he failed to listen to the warnings of ice ahead and even refused to slow the ship down despite these warnings.

He never issued a general "abandon ship" order, meaning that hundreds of people were not aware that the ship was in danger until it was too late.

The captain also allegedly let several lifeboats leave the ship, which all were less than half full. The first lifeboat to leave had room for 65 more passengers. It left with just 27 on board, and it never came back to pick up other survivors.

Hero? Not so fast.

The Titanic actually sank because a coal fire weakened its hull.

The Titanic is not the worst maritime disaster in history

While the sinking of the Titanic was surely a tragedy (the official death count is 1,503 people), it is far from being the most tragic maritime disaster. That would be the sinking of the MV Wilhelm Gustloff, a German transport ship that was sunk by a Soviet submarine in 1945. In that disaster, 9,343 lives were lost.

True, that ship went down in a time of war, but the Titanic wouldn't even be considered the worst maritime disaster even during times of peace in history. The MV Doña Paz of The Philippines sunk in 1987, killing 4,400 people when the ship collided with an oil tanker.

The Titanic is actually the fourth largest maritime disaster, it’s just hands down the most famous. This is largely due to the fact that it makes for a good, cinematic story — and because the boat was carrying so many affluent people.

The third class passengers were forcibly prevented from exiting the ship

In one of the most dramatic scenes from James Cameron’s “Titanic," third-class passengers are forcibly held below deck and prevented from reaching the lifeboats. But historians say this was dramatized significantly for the sake of the film.

On the real Titanic, gates did exist to keep third class passengers from this rest of the ship, but this was because of U.S. immigration law at the time. Third class passengers included Armenians, Chinese, Dutch, Italians, Russians, Scandinavians, and Syrians as well as those from the British Isles — all who were in search of a new life in America.

Each class of passengers had access to their own set of lifeboats. Now what is true  — and heartbreaking — is that there were far too few lifeboats allocated for third-class passengers, so many did attempt to access the first and second class decks. They weren’t prevented from going, however, they had to get through quite a maze to get there. Additionally, there were very few signs directing passengers to the upper decks, and those few signs were written in English — a language many of the third class passengers didn’t speak or read.

And no, the Titanic wasn’t carrying a mummy

Yes… this is actually a real titanic tale. This myth isn’t as common as the rest, but it still exists, and for years was commonly thought to be true. People have long suggested that among the cargo, was a mummy who belonged to a “Priestess of Amun" or “Princess of Amen-ra." According to legend, whoever moved the mummy was cursed with great pain and death.

But the crew of the Titanic kept solid records, and clearly, something as valuable as an ancient Egyptian mummy would have turned up on the manifest. No such mention! Though maybe they can save that for the sequel?