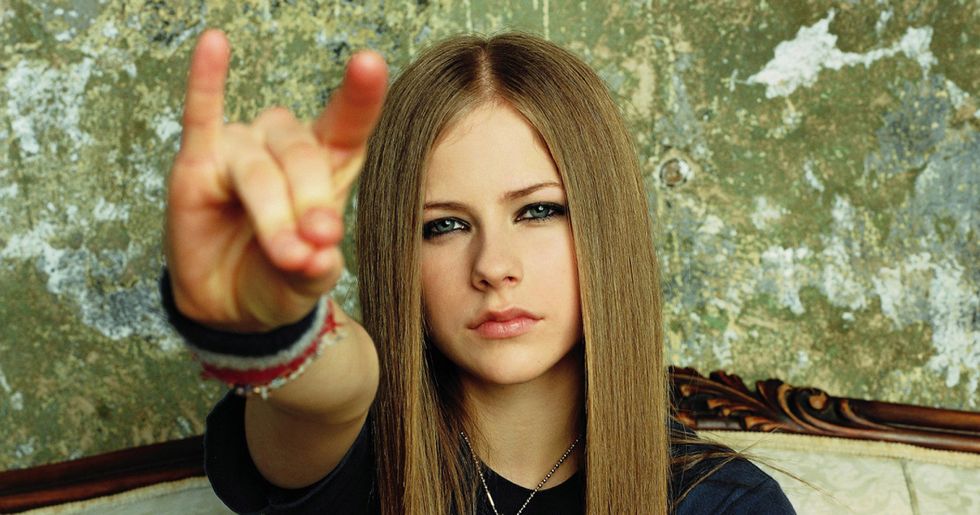 Have you ever thought about the Avril Lavigne song 'Sk8er Boi' and wondered, "Hm, this is a good song but how does it relate to classic author Charles Dickens?"

Oh, you haven't? Well, don't worry, a real live historian has wondered for you.

And his analysis of the early 2000s pop-punk hit juxtaposed with the life of Charles Dickens is pretty great. Who knew Avril Lavigne was so literary?

In case you need a refresher, here's the plot of the song 'Sk8er Boi' by Avril Lavigne.

Avril, the new girlfriend of rockstar 'Sk8er Boi,' recounts his tragic high school love story. He fell in love with a girl, but they couldn't be together because the girl, a ballerina, was embarrassed by the boi's choice of hobbies: sk8ing. (The 8 is important).

The boi goes on the be a big star, rockin' on MTV.

The girl sees him on TV while she's feeding her baby and calls up her friends to tell them, but they've all already bought tickets to see his show! If only she hadn't turned him down, she could be living the life of luxury with him. What a tragedy! But too bad, he's Avril's now, and she understands him like Ballet Girl never could because she wears men's ties and a lot of black eyeliner.

But historian and author Greg Jenner had some very important thoughts on the content of 'Sk8er Boi.'

According to him, 2000s era faux-punk hit 'Sk8er Boi' is basically the story of Charles Dickens.

First, Greg added his own little spin on what he thinks happened after Avril and the Sk8er Boi broke up, since he was still very obviously in love with Ballet Girl.

According to Greg, Sk8er Boi and Avril broke up after having a few kids and although Sk8er Boi is still professionally doing well, he misses his rockstar life and of course, the mysterious Ballet Girl he fell in love with in high school.

With the scene set, Greg goes on to explain why Sk8er Boi has always reminded him of Charles Dickens.

IT'S NOT RIDICULOUS, GREG. We are very here for this comparison. Read on to find out how much more Charles Dickens and Sk8er Boi have in common.

To put it bluntly:

Of course, he was, Greg. We can already see him wearing a beanie and attempting but not pulling off a kickflip on the railing outside the middle school while simultaneously thinking about poverty and class in mid-19th century London. We're with you.

Little known fact: the original line from Oliver Twist was "Please, sir, I want a ticket to the Sum 41 show and a pair of Etnies."

Just kidding. Anyway, there was more to Greg's theory.

And when she finally gave him the time of day, guess what: he was super famous.

It was basically a dream scenario, the one you've played in your head a thousand times.

You are finally so famous, the person you pined for in high school HAS to pay attention to you! For most of us, it is only a dream. But not for Charles Dickens. And not for Sk8er Boi.

Much like Sk8er Boi, Dickens finally had a chance to impress his ex-lover.

Dickens met his lady, and, well, she wasn't as hot as he remembered.

He was basically a total dick about it. Much like Sk8er Boi was when he let his new girlfriend write an entire song about how sad and pathetic Ballet Girl was.

Dickens and Sk8er Boi are more alike than you thought: both of them were kind of dicks when the girls they liked turned out not to be as hot as they wanted.

I like to think Ballet Girl snagged a lead in the local Nutcracker, caught the attention of a reviewer, and danced her way out of that small town, never thinking about Sk8er Boi again, personally.

Maybe he's a Sk8er Boi with a heart of gold.

Other people had strong opinions about Charles Dickens.

He definitely wasn't good enough for her.

Charles Dickens wife definitely should have said: "see you later, boi." Do you have a British lit/2000s pop music fan in your life? Who doesn't?! Share this article on Facebook with them and blow their minds!