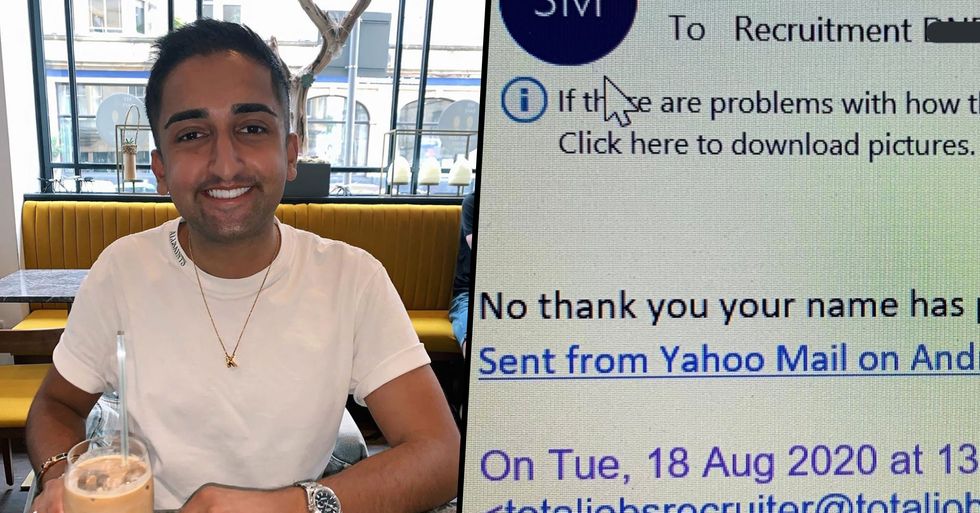 A recruiter is being urged to shame a job applicant after he rejected an interview because of his name.

We should be living in a world of equality.

Where everyone is equal.

But unfortunately, over the past few months, humanity has sadly proven that is not the case.

The Black Lives Matter movement has highlighted the issues in society.

Horrific stories have been shared.

Highlighting the everyday racism that many face.

And now there's yet another one.

One recruiter has revealed how a job applicant refused an interview due to his name.

And he's now being urged to name and shame the applicant online.

The Black Lives Matter movement has taken over the world...

Racially motivated police brutality has been happening for centuries now...

Violent scuffles have broken out between police and far-right protesters staging a counter-protest to the Black Liv… https://t.co/tTD1IsPxJO
— Andy Vermaut (@Andy Vermaut)1592058606.0

However, not everyone has been so supportive of the movement.

Amongst the stories of positivity from the protests, there have been some tales with a slightly more sour undertone.

Blatant racism is still happening across our country...

And countless stories of black people being targeted and unfairly treated are continuing to emerge.

Weeks ago in Ohio...

A man claimed that his former employer, Taco Bell, fired him because he was wearing a Black Lives Matter face mask.

Sat in his car wearing the white mask, which has the BLM logo emblazoned across the front, Denzel explained that he wore the mask because the surgical masks provided by Taco Bell to their employees proved to be inadequate in warm conditions.

He was told by his supervisor that he wasn't allowed to wear the mask...

But, because of the poor conditions of the company-provided masks, Denzel refused to swap the masks.

Especially considering their CEO, Mark King, issued a statement about his support on the movement just a few weeks ago.

This just goes to show the negative attitudes that continue to surround the BLM movement...

And now, a recruiter has shared his story.

Kamran Chaudhry is a recruitment consultant from Edinburgh.

He has shared the discrimination he faced when offering a job applicant an interview.

Kamran shared the shocking exchange that happened by email, on Twitter.

In his post he wrote "Can’t actually believe I’ve emailed someone to give them an interview for a job and this is the response I got. Baffled. Proof that this shit still exists on a daily basis for some of us"

Alongside that, he attached a screenshot from the email conversation whereby the applicant has rejected an interview offer.

The applicant wrote, "No thank you your name has put me off."

After sharing the post online Kamran received responses of support from hundreds with one user responding "Absolutely disgusting behavior! No one deserves this kind of disrespect."

Whilst others added "Thank goodness he saved wasting your time. Clearly not someone you, or any sane person, could want to a job to. But so sorry you received this. He is clearly an utter plonker."

People have also urged Kamran to expose the applicant after he checked his social media accounts and discovered a history of posting racist content.

However, Kamran posted explaining he could not name and shame the person. He wrote "People asking me to name and shame - I can’t because of GDPR. Can also confirm I’ve found his Facebook and it’s full of racism and anti-BLM posts. Madness to me. Thanks for all the kind words and love, I’m all good. "

For more on the Black Lives Matter movement, keep scrolling...