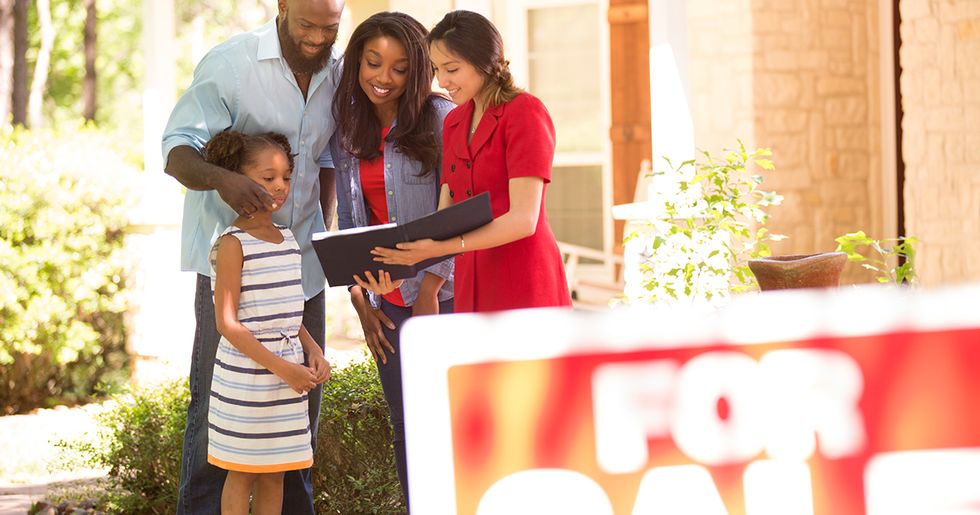 If you're hoping to buy a house in the near future, chances are that you're a little freaked out by the whole process.

There's so much paperwork and money and time involved — what if you mess it up? Some people might tell you it's not big deal, but, uh...you're going to be living there. So yeah. It is a big deal.

You don't want to end up in a Money Pit situation, do you?

Of course not. Luckily for you, a recent AskReddit thread asked real estate agents to share some red flags that potential homeowners should look out for when searching for a home to buy, and we've gathered some of the most useful answers here. You might want to take some notes!

Fresh paint, new carpet, but nothing else updated. It's the realtor remodel special. Just there to make you feel good on your 15 min walk-through. Look at the tiles, trim, foundation to see what you really need to know. And always drive the neighborhood at night if you do not know it. –onepurch

Go to showings when it's rainy as f**k, then check out the basement. This will expose any water issues with the foundation even a moron like me could see. One house I was shown had a cable run into the basement from outside at the dirt level and never sealed - so there was a stream of water pouring over the circuit breaker box onto the basement floor. Passed on that house. –Yvgar

When you bang on the walls if you hear moving it's probably squirrels. Source - bought house full of squirrels. –Cheese84

Imagine having to live in a place with no pizza.

As a construction guy, please please PLEASE check the attic. People buy houses and never check the actual AC. If you go up there and smell a burnt smell, or see big silvery tubes that look crumpled, those are issues. If there is any strong smell, don't buy. No one spends $80 on Glade plugins unless they are trying to hide something. –Paretio

Unless you want to invest in earplugs...

Another one to sniff out!

If you walk into a house and are hit by the smell of Febreeze or air fresheners...well, expect that it probably smells like dogs or smoke when that stuff wears off. Bear in mind that a lot of agents like to burn pretty smelling candles or bake some cookies right before an open house, so it's not a hard-and-fast rule. You mostly want to watch out for it if you're seeing it by appointment... –rugtoad

My Grandfather sold Real Estate for decades. The first two things he looked for was the roof and the furnace. If either were too old or looked like a possible replacement was needed soon then it's something to consider (most first time home buyers can't afford to replace it in the first couple years, and many older homeowners would rather not either). –danny2787

Wouldn't have thought of this one!

Check all your windows, if there is any condensation buildup or evidence of previous condensation they have probably lost their seal. –gmspen01

Start with a firm foundation.

When I was young, my parents took me to an open house and they both loved everything about the property. Cut to us being in the half-finished, half-unfinished basement and my mom has gone into the unfinished part, which has insulation completely put up around what would be exposed foundation concrete bricks. She finds a seam in the insulation and, 'cause that's who she is...pulls it back a little. My dad is in the middle of saying "don't do that, you're being ridiculous" when she interrupts him to tell him to have a look. Huge crack in the foundation running from the floor, diagonally across the entire foundation and up to the ceiling. Dad told the realtor, who was pissed. off. The owners never told her...which you are supposed to do. –chefjenga

When the sellers have stuff hung on the walls in places no one would EVER hang stuff, they may be covering up damage from a decade-long termite infestation. –_seep

This is very suspicious.

If they don’t let you see a particular room/attic, basement etc for some excuse. –maskthestars

Head to the basement.

I always look around the floor of the basement, usually, you can tell if there has been standing water down there. Obvious signs are A "ring," like a high-water mark. It can be difficult to see if there has been some cleanup (i.e., cover-up) done, but you can usually tell on the back of the stairs or someplace else inconspicuous. If there is anything metal down there, like a shelving unit, and the legs are all rusty. If there are lifted or missing tiles, particularly if it's in a low spot or around a drain. –MichiganRealtor

If you are viewing houses in the winter and there are a lot of icicles on the roof it’s not properly insulated. –justifun

Here comes the Sun (I hope)!

Whether you get enough sunlight. I lived in an apartment that was shadowed by other apartments and trees on the other side. Barely got any sunlight. And it was always so cold. –Moleman767

I always try to get hold of previous water bills to gauge if there's a leak somewhere. I actually had this house offered to me and the underside of the house was hollow underneath a thin slab of cement because of the water gushing from one of the pipes. One hole was around 4ft. –Rotit1230

Where one door closes...

Open every door and window in the house to see if any stick at the top or sides, which may indicate settling problems. –KithAndAkin

Speaking from personal experience - look out for a seller who likes to do DIY home improvements. Sure, those cabinets etc look OK but you are in for a lifetime of sh*tty problems! –Sparkle

For the love of god check your cell phone signal in the house. I just moved into a new house and I have one bar on the second floor if I stand on a chair. Turns out there's only one cell tower to serve the surrounding neighborhood of 200+ houses and since it's next to a neighboorhood of million dollar homes they can't get the approval to put in another one so I'm SOL. –Caliblair

Grading. Hands down. Or, the angle at which the ground slopes at the foundation of the house. If the ground slopes towards the house, then that means any rain is just going to be funneled right up to your foundation and can cause some big problems. Extra caution if it is sloped concrete, like a driveway, cause that means either mudjacking or jackhammering, both labor and cost intensive. Seriously, when you're looking at a house do a walk around the perimeter first. Could save you tens of thousands and Future Foundation problems. –Jtizzzle

Read the termite paperwork very carefully. I bought a house full of termites that came with paperwork from an exterminator. All they would do is re-treat. It took three re-treatments to get rid of them and I had to pay to replace a lot of wood myself. –longhairedcountryboy

You should REALLY get a Radon test with your inspection. They’re relatively inexpensive and the seller will have to pay for a Radon Reduction System if the home has high levels (in most states) which can cost over $2,000 depending on the home. Also, Radon is really dangerous, so the peace of mind alone is worth the price of a test. –klatwell

If the house has been on the market a long time and there is only 1 picture...good chance it needs gutted. –N3rdC3ntral

Be sure to test all appliances that are staying with the house. Ice maker, dishwasher, microwave, garbage disposal, stove, washer/dryer, etc. Nothing worse than spending so much money to get into a house only to realize half the appliances don't work properly. –abbeymb

Homes with a septic system: If they’ve installed a separate drain for the washing machine so that it drains out to the yard, they have a bad drain field. –actualoldcpo

Don't need to tell me twice.

Get the damn sewer line inspected! Basement sewer backups are the worst! –giantsfan28

Who made this big mess?

Did the homeowners bother to clean for the showing? If you walk into a dirty house they are actively trying to sell, the sellers are likely neglecting lots of basic upkeep on appliances, the yard, etc. –TenaciousFeces

Make sure you know the utility options before you buy. Especially for Internet because you rarely have a choice. Make sure it's something you can tolerate. –TheObstruction

Time to meet the neighbors!

If you're buying a house or condo that is part of a group all built by the same builder, knock on the next-door neighbor's door and ask if they had any problems. Especially if its new construction. I recently bought a townhome as the second owner. Discovered a faulty shower pan in one bathroom and thought it was a one-off and the inspection didn't catch anything else. Turns out that the second bathroom has the same issue, it's just that the shower is large enough that enough water didn't accumulate to present itself if no one was actually in it when it was running. I would have known this if I had asked my neighbors about it. Every shower in that row of homes had the exact same problem. –The_Prince1513 Know someone who's looking to buy a house? Share this helpful list with them!