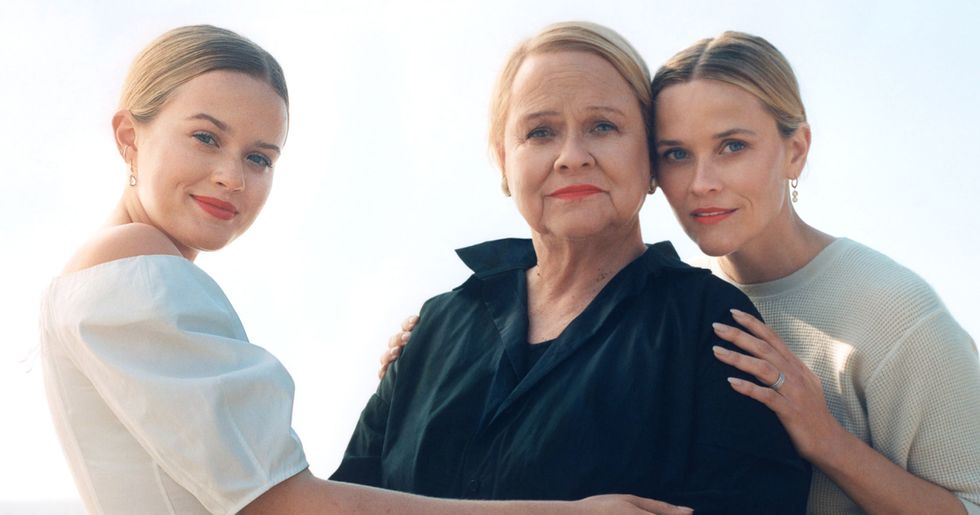 We all know who Reese Witherspoon is. I mean how can we not? She has been coined "America's Sweetheart" and according to her IMDB page, she held the role of highest-paid actress in Hollywood in 2007.

She hit the scene at the tender age of seven. She dabbled in modeling and made her first major acting debut at the age of fourteen — the movie was The Man in the Moon. I remember watching this movie at a young age myself and thinking she was just someone I wanted to be like. And the same holds true this day.

Reese is a mother to three, an actress, activist, and entrepreneur — her clothing and home design collection, Draper James can be found at Crate & Barrel. She's a woman who seems to have it all.

Most recently she posed for Vogue magazine with her look-alike daughter and mother. As you can see, the Witherspoon gene runs strong.

In this picture, Reese poses with her mama (Betty) and daughter (Ava). Ya can't help but be a little jelly of the beauty in this pic.

"Twinning" it they are, er, "tripling" — is that even a word? Here you have three generations of women who are winning at life. The gene Gods were good to the Witherspoons'.

Yeah, she is definitely a Kween!

As expected, Reese slayed the photo shoot. In fact, I have never seen a bad photo of her.

There is just something about being from the South. The accent, the stature, the looks. Maybe it's something in the sweet tea? Reese was born in Louisiana. Her mother, Betty, was a labor-and-delivery nurse.

It seems they really are living their best life!

You cannot deny how amazing their lifestyles must be. Here are more pics to prove these women are winning.

Her mother, Betty also had success.

Betty earned five degrees, including a Ph.D. in pediatric nursing. I guess you can see where Reese gets her ambition from!

Reese was raised in Tennessee.

According to Wikipedia, Witherspoon was raised as an Episcopalian and has said she is proud of the "definitive Southern upbringing" which she received. She said that it gave her "a sense of family and tradition" and taught her about "being conscientious about people's feelings, being polite, being responsible and never taking for granted what you have in your life".

Her father was a surgeon.

Reese's father, Dr. John Draper Witherspoon, Sr. was a military surgeon specializing in ear, nose, and throat. He also served in the US Army Reserves.

She actually has a home in Tennessee.

Well actually, IMBD refers to it as an "estate." She has resided there since 2014.

Reese used to be in "awe" of her mother.

Reese told Vogue that when she visited her mother at work, "There would usually be two women, and they’d be doing all the diapering, all the feeding — everything, all at once," she said. "She always had a positive attitude, always laughing, always telling a joke, and she always had a billion friends at work."

That was Reese's nickname as a child. And I'm willing to bet this had something to do with the roles she takes on, and also the name of her own production company — Type A Films.

Reese has 59 movie credits to her name.

But, she'll forever be remembered for her role as Elle Woods in the movie, Legally Blonde.

Do you remember some famous quotes from that movie?

I think mine is when "Stifler's Mom," says, "You look like the Fourth of July! Makes me want a hotdog real bad!"

And if you're a huge fan of Reese's, then you should know this...

Legally Blonde 3 is in pre-production. It is slated to come out in February 2020.

Reese was once heard saying...

"When you look good, you feel good. I know that's what Elle Woods says, but it's true!!"

The mother-daughter bond runs strong with Reese and Ava.

Reese is also proud of her daughter, Ava. She told Vanity Fair, "I do see the resemblance. She is a beautiful person inside and out. She’s just a good soul. I’m not sure what she thinks. I’m just ‘Mom’ to her."

Ava was named after a family member.

It has been said that Ava was named after her father's grandmother.

It's unknown if her daughter will follow in her footsteps.

Reese says that her daughter still has time to think about what she wants to do as far as career goes. And only time will tell if she follows in her Mama's shoes.

Ava was born just six months after the premiere of her mother (and father's) very popular film.

Can you name it? The year was 1999 and the movie also starred Sarah Michelle Gellar — a rising star at the time. Cruel Intentions.

1999 was a very prominent year for Reese.

A little bit of trivia for you here. Cruel Intentions was released on March 5, 1999. Reese got married on June 5, 1999, and Ava was born on September 9, 1999. I wonder if 9 is Reese's lucky number? If you have never seen this movie before, then get on it! It's a must-see, with amazing performances by the entire cast.

Reese also starred in another hit movie this same year.

That's right, Reese's other claim to fame was from the movie, Election. She played Tracy Flick — an overachieving Type-A student stopping at nothing to become class president.

And you do remember who Ava's dad is, right?!

We can't help acknowledge the luck this girl has. While the resemblance to her mother is striking, let's not forget who her famous father is — Ryan Philippe.

Ryan and Reese met at the actress's 21st birthday party.

Reese has said that when she first met Ryan at her birthday party, she asked him if he was her "birthday present?" I guess you can say things went well for them after that initial meeting.

Ryan and Reese divorced in 2007 — just eight years into their marriage. And they both have agreed that their age is ultimately what split them up. Though, they have two children together. Ava and her brother, Deacon.

Ava's brother Deacon is four years younger than her.

Deacon was born four years after Ava, and has been told he looks more like his Papa. I can't say I disagree.

She sure did! Reese married talent agent, Jim Toth in March 2011.

The couple have one child.

Reese gave birth to her third child — a boy (Tennessee) on September 27, 2012. I wonder if his name has something to do with her love of the state?

Reese has accomplished many things.

But, I'm willing to bet having her family is her greatest accomplishment.

In addition to acting and raising a family, she has a home and fashion line, called "Draper James" — the name is in honor of Witherspoon's grandparents.

And she has more stuff in the works.

The star launched her own media brand called, Hello Sunshine. According to the site, this company is "anchored in storytelling, creating and discovering content that celebrates women and puts them at the center of the story." Women empowering women — no doubt.