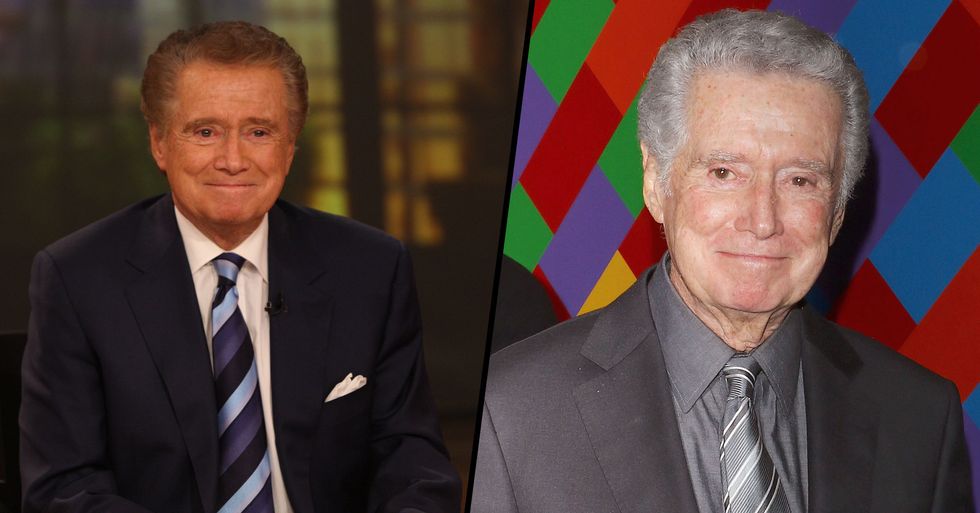 Regis Philbin's Cause of Death Confirmed

Regis Philbin, the legendary television host, has tragically past away.

Philbin died at the age of 88, just one month short of his 89th birthday.

The iconic TV host will certainly not be forgotten any time soon. And now the star's cause of death has been confirmed.

He was a friendly face to most of the USA.

The legendary TV host had a career spanning decades but was best known for Live! with Regis and Kelly, Who Wants To Be A Millionaire, and America's Got Talent.

His family confirmed the news of his death.

The Philbin family revealed to People: "We are deeply saddened to share that our beloved Regis Philbin passed away last night of natural causes, one month shy of his 89th birthday."

"His family and friends are forever grateful for the time we got to spend with him – for his warmth, his legendary sense of humor, and his singular ability to make every day into something worth talking about. We thank his fans and admirers for their incredible support over his 60-year career and ask for privacy as we mourn his loss."

Our thoughts go out to the Philbin family at this hard time. A true icon.

Tributes immediately poured in for the star.

Including this adorable snap from Ryan Seacrest.

Other big names stepped up.

Even this guy got involved.

Many beautiful words were shared.

Regis was a great broadcaster, a good friend and a tremendous amount of fun. He leaves behind a beautiful family an… https://t.co/vfifbIcmgS
— Jimmy Kimmel (@Jimmy Kimmel)1595705064.0

"Regis was a great broadcaster, a good friend and a tremendous amount of fun."

RIP Regis Philbin, who gave us one of the greatest moments in television history https://t.co/5OVewyEOHR
— Tom Hourigan (@Tom Hourigan)1595706135.0

Showing the impact Philbin had on the industry.

It is hard to say goodbye to someone whose smile and laugh greeted us so often. Regis Philbin, thank you for bringi… https://t.co/ANrPlLNXaK
— George Takei (@George Takei)1595706858.0

"It is hard to say goodbye to someone whose smile and laugh greeted us so often."

Becoming a true part of many people's everyday routine.

But the personal interactions with Philbin sound equally special.

"He was always up, always genuine, always real."

Other TV legends spoke up.

"We throw this word around too much but Regis Philbin was a legend."

"We are beyond saddened to learn about the loss of Regis Philbin. He was the ultimate class act, bringing his laughter and joy into our homes everyday on Live for more than 23 years. We were beyond lucky to have him as a mentor in our careers and aspire everyday to fill his shoes on the show. We send our deepest love and condolences to his family and hope they can find some comfort in knowing he left the world a better place."

Even Andrew Cuomo offered this up.

And now his family has spoken out.

And revealed Philbin's cause of death.

This was following his battle against coronary artery disease.

RIP to this television legend.

And sadly, Philbin isn't the only great we've lost this year. Scroll on for a full list.