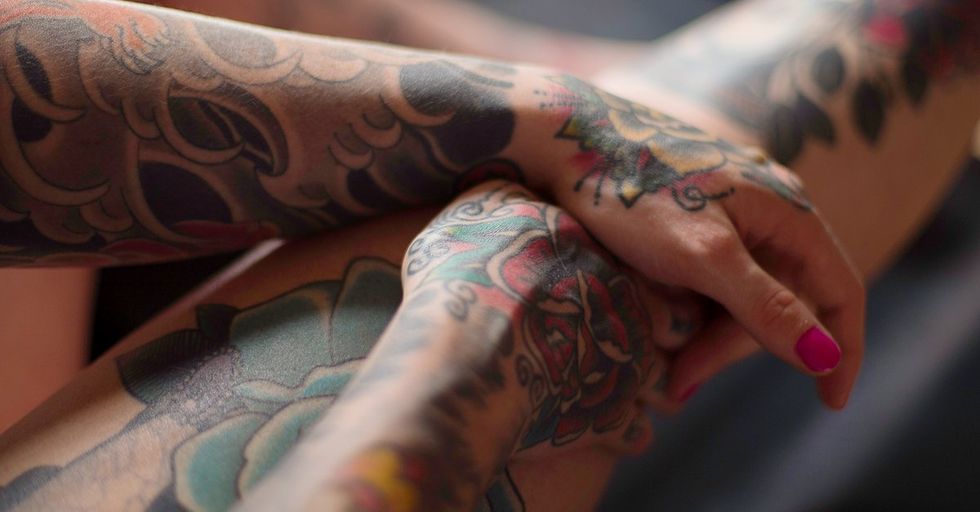 Almost every person who has ever gotten a tattoo has heard the same thing:

"It's gonna look bad when you're old!"

There are plenty of tattoos out there in the world that don't look particularly good when they're brand-new, let alone after they've aged 10 years. To give you an idea of what tattoos look like after they've had a chance to age, here are some pictures of fresh tattoos compared to what they look like after a few years.

What a difference 10 years makes.

As tattoos age, their finer details often become lost to time and sun damage. You can see how crisp and readable the text on the left was when the original picture was taken. 10 years later, it's a bit more smudgy.

Here's the effect 13 years has:

Honestly, that's not too bad! I wonder how it'd compare to an actual shark after 13 years.

This trio shows a face right after it was tattooed, three years later, and 10 years later. There definitely aren't enough features that you could pick this face out of a lineup, but you can still tell it's a face, so that's something!

This tattoo was done by an artist who had just been tattooing for three months. Now, let's see how this wizard held up after 17 years...

Not quite as magical...

Hey, 17 years is a long time, even for magic users. As you can see, the color in the face and flames is almost completely blown out and there isn't nearly as much detail anymore.

From wizards to lizards.

This picture was taken when the client's gecko tattoo was fresh. If not for it being black and white, you could almost expect it to crawl right off the skin.

Once again, some definite loss of detail and muddying of the lines. Time has a similar effect on all tattoos, but there are definitely steps you can take to mitigate fading and bleeding.

The key is sunscreen.

(See what I did there? The key? And it's a tattoo of a key?) If you want to keep your tattoo from fading, apply sunscreen over it every single time it's going to be exposed to the sun. In fact, you might as well put sunscreen all over you and protect your whole body.

Here's that same key after 4 years.

A little worn around the edges, but it still has quite a bit of character. In fact, it's sort of similar to an actual antique key in that way. This next tattoo actually held up remarkably well over the years...

Here it is shortly after it was first done:

As you can see, it's a black-and-white rose. Take a close look and see if you can see any differences after three years.

Other than it no longer being red around the edges from the fresh tattooing, this tattoo looks basically identical to when it was first done. Impressive!

But how well do they hold up over time? Unfortunately, watercolor tattoos are the most susceptible to fading and becoming clumpy-looking.

Still very lovely! But you can see the differentiation between the colored flames is much less clear than it was initially.

This tattoo is absolutely gorgeous.

Here's the before and after in one picture:

In this example, the "after" image was taken two years after the "before." Here's yet another one that still looks pretty good after time has passed (although you can clearly tell the difference).

The tattoo of a Bernie fan.

I assume this person got this tattoo back when there was still a chance that Bernie could become president. (Remember those days?!)

Presumably, after the presidential hopes were dashed. At least he could still be a tattoo, though!

Finally, one for all you Tauruses out there:

Considering this tattoo is located in a pretty high-traffic area (the inner wrist), I'd say it stood up relatively well against the passage of time. What do you think? The next one looks totally different from when it was fresh.

Look, a lot of things got a lot fuzzier for many people between 1994 and 2009. You can't necessarily blame this tattoo for doing the same.

A rose and its thorns

Roses have thorns, and these thorns have held up pretty well after eight whole years! It's a high-traffic area too. Impressive.

Waves through the years

Sure, it's a little fuzzy after four years, but it's also water, and if water were static, it would be ice!

Here's the thing about finger tattoos: Don't do them. This is the degradation after only one week!

Fin (I meant to write "fun" but I misspelled it as "fin," but then I left it because...fish) fact: The colors of this goldfish have changed, but so do real goldfish! I won a goldfish at a carnival. He was bright orange when I got him and by the time he died ten years later, he was totally white and translucent. The next one is totally surprising.

Sure, the color is pretty faded, but those flowers have held up nicely over the years. The second pic was taken 10 years after the first!

Four years on the foot

This is a really nice piece, and dare I say... I kind of like the aged version more? The colors are a little faded, but four years later, it's gained some character.

Obviously, here we have the aged photo on the right. There's a four-year difference between these photos, and Ms. Mermaid is looking mighty fine.

I hope this person still loves the Teenage Mutant Ninja Turtles seven years later because that tattoo isn't going anywhere! It's in amazing shape after seven years. This is a celebration that calls for pizza.

Gorgeous. Just lovely. That detailed portrait isn't going anywhere. It's incredibly detailed and has held up amazingly. The next one isn't as...nightmare-inducing.

Stars in the sky

I think the stars just aren't as visible because it's particularly foggy out tonight. That's how it works, right?

This flower tattoo is a magician because it's slowly making itself disappear. This just seems like someone didn't know what they were doing.

I think your palm is probably one of the riskiest places to get a tattoo because it's so high-traffic, but this little trampoline man is super clever, so it was totally worth it.

Yes, the lines are a bit faded, as are the colors, but I think the beam of light in the center of the cross looks even better than it did when it was fresh.

There are only two years between these pictures. Keep that in mind when you go to get your delicate wrist tattoo. Know someone who claims their tattoo will never change? Prove them wrong by sharing this list with them.