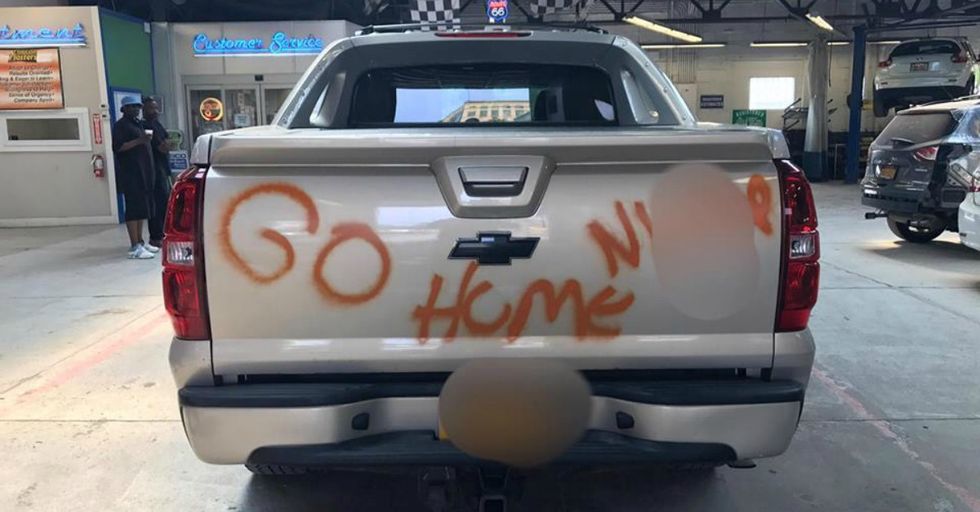 We hate to see stories like this, ever, but today we sharing this one with a heart warming ending.

It all started on an average Tuesday morning when a customer pulled up to Frank Todaro's Buffalo, New York, body shop, Collision Masters LLC, in a truck covered in ugly racial slurs.

This is what they were greeted with.

"Customer pulls into the shop today and literally hear crickets when all the air tools and employees stopped and shook their head in disgust on what they saw," Todaro wrote on Facebook.

"This unfortunate customer had racist remarks with spray paint all over the vehicle," he continued.

Henry King, the truck's owner, told WKBW that the graffiti appeared the morning after an altercation with two neighbors, who allegedly told the South Buffalo resident, "We'll get you kicked off this street. You don't belong here." Police are still investigating the incident, but Todaro wasn't about to let this crap go without taking action himself. Enter the "best of times" for this scenario.

"Literally my guys dropped everything and attacked this truck like a Pit Crew and got the job done," he wrote.

After finding the right chemical to remove the paint, seven or eight of the shop's technicians worked on the truck until the graffiti was removed, which took about thirty minutes. But he wasn't done. "I told the owner of the vehicle this ones on me and I wanted him to know that Buffalonians will never stand for this!" wrote Todano. "Great job and many thanks to the team at Collision Masters."

"A very special thank you to the management and staff at Collision Masters LLC for doing the work on this customer's car for free. CM's response serves as a wonderful example that when someone attempts to sow seeds of Hate, Love will always triumph!" another one wrote.

In fact, there were more than 9,000 comments on the post.

And it didn't just stop with the comments...

Others chipped in by leaving five-star reviews of the shop.

"I ain't even in your neck of the woods but props to you & your team bro. News travels fast & you guys did a good thing. Attitude reflects leadership & I you all showed the best of both. Keep up the good work guys," wrote another.

There are currently more than 1,600 five-star reviews of the place, so it goes to show that karma can truly pay off.

Todaro and his team even received a proclamation from Buffalo's mayor and calls from local politicians for their quick-thinking actions.

So yes, people can suck, and there are still a lot of racist, ignorant people out there who will never change how they think. But people can also be pretty awesome, and love can always trump hate. It might have been a small gesture, but it had a huge impact. Faith in humanity restored.