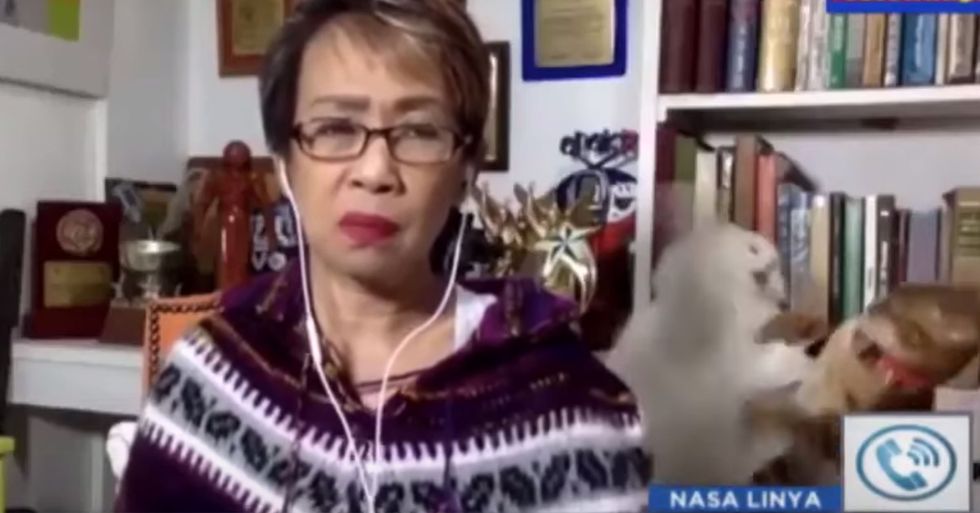 Another reporter has gone viral this week after her cats started fighting each other during her live TV report and it's safe to say it has given us yet another iconic internet meme.

Keep scrolling for the hilarious video.

But you know what? You can't always plan for these things, especially when you're live on air.

Now that we're all stuck at home, there's also an extra added pressure...

Due to the ongoing pandemic, even reporters are finding it hard to carry out their work effectively. One would assume you would take all precautions necessary when broadcasting from within your home, but that isn't always the case...

From half-dressed journalists to surprise side-piece appearances, we've really seen it all.

The world of TV reporting has proved to us why business and pleasure really don't mix.

One Spanish reporter was stuck in the hot seat when his "other girlfriend" was caught on camera in the back of his videocall...

And we got more than we bargained for when this happened...

We all saw a little bit more than we wanted after a news reporter thought he could risk not wearing any pants while doing a video call.

We've also had some unexpected guests...

Thankfully, this reporter was dressed appropriately. However, she accidentally became the mediator of a catfight... Yes, a literal cat fight.

We all know how hard it is dealing with family members in the house...

Zoom meetings have never quite gone to plan with everyone running around the place.

But imagine having to deal with uncontrollable pets...

Now we all adore our pets, but sometimes, just sometimes, they can really get on our nerves.

One reporter from the Philippines had her hands full when her cats started fighting each other...

Journalist Doris Bigornia did not expect her pets, Bella Luna and Nala, to have a physical fight in the background of one of her live videos streaming across the news channel.

And it gets worse because she was in the middle of interviewing a guest on the show.

Even though she remained as calm as possible, the look on her face suggested that she was not impressed with the behavior they were displaying.

Despite her warning looks, the felines kept clawing at each other.

It was a literal cat fight for all of the nation to see.

At one point, she carefully turned around and gave them that "look."

Yeah, the same kind your mom would give you when you're a kid running around the grocery store and embarrassing her.

But the kitties continued trading blows.

And the moment definitely caught the attention of the viewers who started sharing the clip online.

After seeing it Bigornia's daughter decided to repost the video to her Twitter saying:

"My cats have no chill!" (Translated to English.)

And then the journalist herself had her say writing this:

"My children, there are laws in the studio!!!" (Also translated to English.)

But the internet had already fallen in love with her sassy pets.

One user wrote how it "completely made her day seeing the interaction." Bigornia also posted that her kitties made up after the fight proceeding to lick each other clean while laying next to each other. Aw!

If you're in the mood to read more about botched TV appearances...

Find out why fans were worried about Simon Cowell after his latest appearance on Britain's Got Talent.