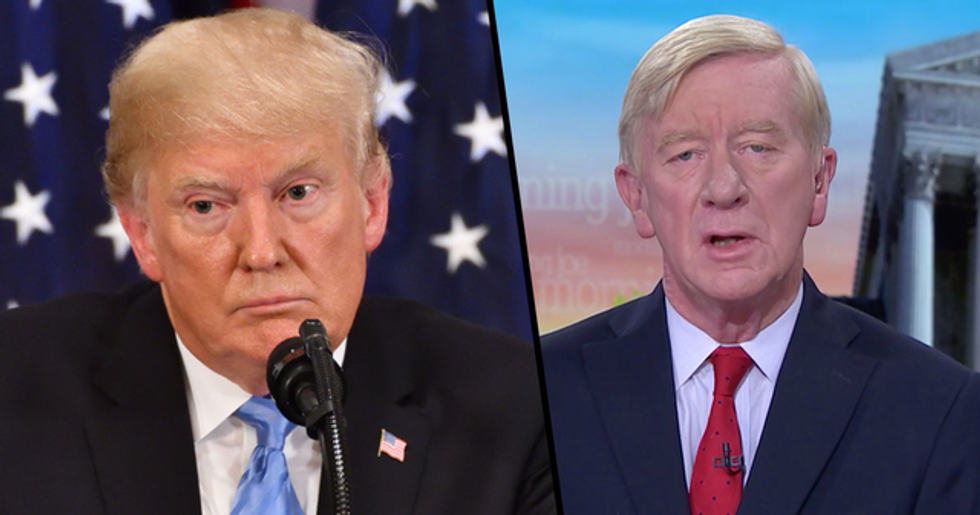 In a shock 2020 election twist, it was announced last week that a formal inquiry into the impeachment of President Trump will officially take place due to allegations that he used foreign power in order to "harm a political rival."

And, to make matters worse, Trump now has members of his own party speaking out against him.

Fellow Republican presidential nominee, Bill Weld has shocked the nation in a recent interview after he claimed that Trump deserves the "death penalty" for committing "treason." I suppose it is the law...

Keep scrolling to hear what Weld and other members of the republican party have had to say about our disgraced president...

The announcement we'd all been waiting for came last week.

Nancy Pelosi, Speaker of the United States House of Representatives, announced on the evening of September 23rd that a formal impeachment inquiry into the president will be launched.

The inquiry comes amid some serious allegations against the president.

President Trump has been accused of seeking the help of a foreign country in order to harm his political rival, Joe Biden.

These allegations are serious...

Trump allegedly pressured the Ukrainian president, Volodymyr Zelenskiy, in a July phone call to investigate the son of Joe Biden, the former vice-president and the frontrunner for the Democratic nomination to compete for the White House in the 2020 presidential election.

And now, he is finally facing the consequences of his actions.

“The actions taken to date by the president have seriously violated the constitution," Pelosi said in her formal address in Washington on Tuesday evening last week. “The president must be held accountable. No one is above the law."

She has highlighted the severity of his alleged actions.

During a meeting with the Democratic caucus on Tuesday, Pelosi said that they must “strike while the iron is hot" as she laid out her case for an impeachment inquiry. “This is a national security issue," she said, according to a senior aide in the room. “And we cannot let him think that this is a casual thing."

Meanwhile, Trump has denied any wrongdoing.

Because of course he has.

He even ordered the transcript of his phone call to be released to the public.

“You will see it was a very friendly and totally appropriate call," Trump tweeted “No pressure and, unlike Joe Biden and his son, NO quid pro quo!"

And, just for good measure...

Trump wailed about potential presidential harassment. You've made your bed, Donald, now you need to lay in it.

The Democrats are aiming for a speedy impeachment push.

Being the ones to initiate the formal inquiry in the first place, many Democrats (and many other Trump critics) are hopeful that the president may be booted out of office by Christmas.

Because people are outraged and, quite frankly, fed-up with his actions.

He has even been branded a coward by many after he threatened the whistleblower with the death penalty.

But it seems that it isn't only the Democrats wanting Trump out of office...

Because there are fellow republicans wanting to see the president's head on a plate... Literally.

Members of Trump's own party have been speaking out against him.

But fellow presidential candidate, Bill Weld, has made some comments that have particularly stuck out...

Because he has insisted that, rather than the whistleblower, it should instead be Trump who should "face the death penalty" for "treason."

Weld is another Republican nominee for the presidency in 2020.

Yet, despite being a part of the same party, Weld isn't too impressed with Trump's recent and arguably corrupt antics.

The fellow republican has dished out some harsh words about the president.

During an interview on MSNBC‘S Morning Joe, the former Massachusetts Governor outlined that Trump wasn’t "just undermining democratic institution," but it is treason, "pure and simple."

He didn't hold back with his evident disgust at Trump's wrongdoings.

"Talk about pressuring a foreign country to interfere with and control a US election, it couldn’t be clearer," he said in his interview. "And that’s not just undermining democratic institutions, that is treason. It’s treason pure and simple."

And he has suggested that the death penalty is a very much valid punishment in this instance.

"The penalty for treason under the US code is death. That’s the only penalty," he adamantly stated. "The penalty under the Constitution is removal from office and that might look like a pretty good alternative to the President if he could work out a plea deal."

According to the US code, individuals found guilty of treason "shall suffer death" or face imprisonment, a fine, and "shall be incapable of holding any office under the United States." So maybe the death penalty won't be Trump's only fate.

Though many believe the death penalty would be too far...

Despite the death penalty being legal in twenty-nine states, many disagree with the punishment, branding it dated and unethical. Most believe that Trump would serve a much better punishment behind bars.

Whether Trump will ever face any consequences to his actions, only time will tell. Keep scrolling, however, to read the full transcript of Trump's phone call, and to see for yourself whether he was committing an act of treason...