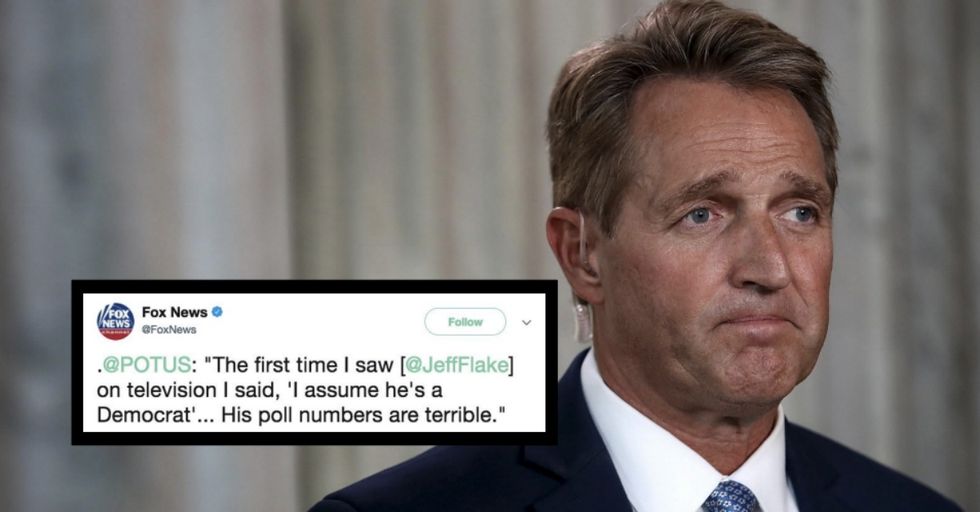 Senator Jeff Flake of Arizona has had a somewhat up-and-down career in politics. A staunch Republican, he originally began as a member of Congress, where he promised to serve only three terms, but then decided to run for a fourth, saying "It was a mistake to limit my own terms." He has voted at least five times against disaster aid and was one of only eleven members of Congress to vote against a bill sending emergency funding to Louisiana after Hurricane Katrina. He also votes 91.7 percent of the time with Trump. Point is, Flake seems like the least likely person to call out the president.

Except he just did, and he did it in the most spectacular fashion ever.

This week, Flake took his anti-Trump stance one step further when he called out Donald Trump in a 20-minute retirement speech that had the White House up in arms.

Flake's term ends in 2018 and he won't be seeking re-election, mainly due to his long-running feud with Donald Trump, about whom he published a thinly-veiled book called Conscience of a Conservative: A Rejection of Destructive Politics and a Return to Principle.
Buy Now

That book, and Flake's on-going feud with Trump has had far-reaching political consequences.

Private Democratic and Republican polls show him losing badly in 2018 if he runs. His retirement also has another consequence – Arizona, which was once a solidly red state, but is now an open field of combat for both Democrats and Republicans in 2018.

All this is to say that Flake literally has no sh**s left to give. Which meant he let loose Wednesday on the Senate floor. Boy, did he let loose.

In a scorched-earth, take-no-prisoners speech, Flake excoriated Republican complicity in the face of the "degradation of our democracy." Although he never called out Trump by name, there was no question who the Senator was talking about.

The speech started off politely enough.

"Mr. President," Flake said. "I rise today to address a matter that has been much on my mind, at a moment when it seems that our democracy is more defined by our discord and our dysfunction than it is by our values and our principles."

He made some very good, very commonsense points.

"Let me begin by noting a somewhat obvious point that these offices that we hold are not ours to hold indefinitely," Flake said. "We are not here simply to mark time. Sustained incumbency is certainly not the point of seeking office. And there are times when we must risk our careers in favor of our principles." Principles, not holding offices indefinitely, blah blah blah... Basic stuff, right. But he goes on...

He didn't wait, however, before quickly going full-on savage - in the political sense, at least.

At this point, Ivanka Trump's wig was probably spinning (we suppose), but Flake did not stop there.

"We must never regard as “normal" the regular and casual undermining of our democratic norms and ideals," Flake stated. "We must never meekly accept the daily sundering–"(Sundering, by the way, means dividing or splitting. We had to look that up – you know, to make sure you knew the word... *ahem.*) "– Of our country - the personal attacks, the threats against principles, freedoms, and institutions, the flagrant disregard for truth or decency, the reckless provocations, most often for the pettiest and most personal reasons, reasons having nothing whatsoever to do with the fortunes of the people that we have all been elected to serve.

Flake touched on a thousand different ways American politics is being destroyed by the present discourse.

"Leadership knows that most often a good place to start in assigning blame is to first look somewhat closer to home. Leadership knows where the buck stops. Humility helps. Character counts. Leadership does not knowingly encourage or feed ugly and debased appetites in us..."

He reminded leaders – *ahem* Trump – about their responsibility to the rest of the world.

"Despotism loves a vacuum," he said. "And our allies are now looking elsewhere for leadership. Why are they doing this? None of this is normal. And what do we as United States Senators have to say about it?" He wasn't finished yet, however.

Flake wrapped things up by reminding everyone in the room that they all had people they were accountable to.

"I have children and grandchildren to answer to, and so, Mr. President, I will not be complicit," Frank said. Complicit, likely the single defining word of the Trump administration.

The administration has already replied to Flake's speech. They weren't enthused.

According to the Daily Beast, the White House condemned the speech, with White House Press Secretary Sarah Huckabee Sanders calling it “petty." She also added, “I don't think Sen Flake’s language was befitting of the Senate floor."

Donald Trump, of course, went one further. After his daily Fox News roundup, the President cracked his Twitter fingers and went to work.

This statement is a somewhat iffy one. Flake, of course, will not get reelected even if he chose to flip-flop again. Bob Corker, on the other hand, has  favorable polling numbers and a fighting chance. But Trump wasn't done yet.

He then went on to make some downright iffy statements.

Was it really? Did they hold hands and sing Kumbaya? Acerbic sneers aside, The Hill reports that senators did have positive things to say about the lunch, with Senator John Kennedy of Louisiana describing the atmosphere as “lighthearted" and “cordial." So hurray for exaggeration, we guess?

Well, he's not mistaken here. Flake does have an 18% approval rating. We can't help but wonder, however, whether it'll change after his epic speech. You can read the annotated version at the Washington Post.