Rescue Cat Helps Save Owner And Neighbors From Fire | 22 Words 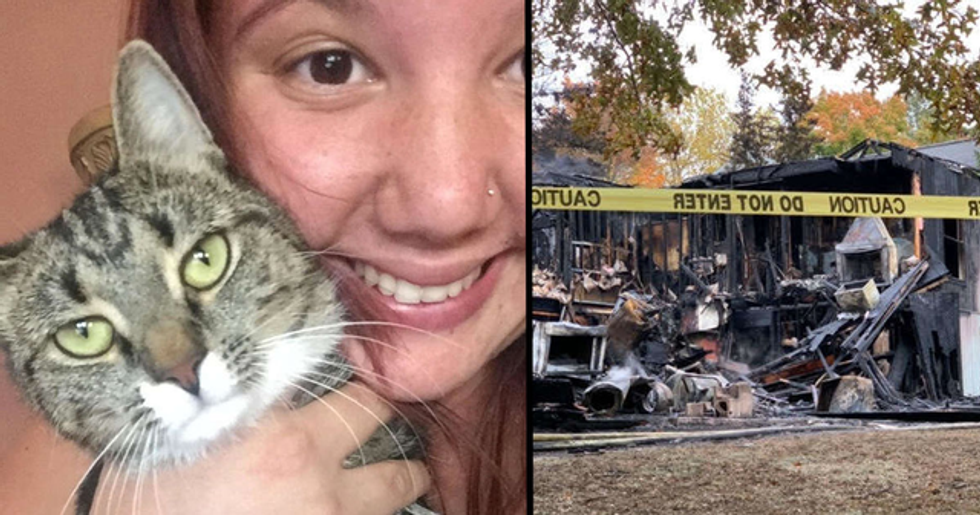 Rescue Cat Helps Save Owner And Neighbors From Fire

A rescue cat has gone beyond what was ever expected of her - and all other cats in the world, for that matter - by helping to save her owner, and all their neighbors, from a fire that had broken out in their apartment block.

Danielle, who had just graduated from veterinary school at Cornell University a year earlier, stumbled across Kitty as a feral kitten.

Kitty had been heartlessly abandoned along the side of a road.

And Danielle originally had no intention to adopt her. “I wasn’t going to keep her," she told The Dodo, “I was going to try to find a good home for her."

But her and Kitty quickly became inseparable.

The kitten's big green eyes and loving nature won Danielle over, and she eventually decided that she simply couldn't give her up.

Kitty has now become a firm member of Danielle's family.

But recently, Kitty went above and beyond for her family.

While Danielle was sleeping, a fire broke out in her apartment block in Lansing, New York.

And, while Kitty usually slept beside Danielle...

She would never usually wake her up.

So, when Danielle found herself being awoken by the distressed animal...

She knew something serious was happening.

Danielle woke to a terrifying sight.

“I saw red flames, smoke, and fire," she recalled, “I just started running back to my bedroom."

However, once she returned to her bedroom...

Kitty was nowhere to be seen.

But to no avail. “I was screaming, ‘Kitty! Kitty! Kitty!’ It was blood-curdling screams that probably made her even more scared," Schafer said.

And began to plan her next escape route. “I was trying to unlock my bedroom windows. They would not open," Schafer said. “The smoke was coming in. I started crying because I could not find my cat."

But miraculously, Danielle managed to escape.

After finding no alternate route out, she simply dashed out of the door into the corridor. “I just ran through the fire and smoke," she said. “I was screaming, 'Help! Help! Help! Help!'"

Luckily, a passerby heard the commotion...

And quickly ran to Danielle's aid, kicking a hole in her window in an attempt to let some fresh air in.

By this point, Danielle's screams had woken other residents...

And, along with Kitty, there were other families trapped inside. “There was a whole family trapped in their apartment," Schafer said. “They dropped one baby to me, and the other to the man."

Luckily, all the families made it out of the burning building...

Danielle returned to her building the following day...

And was horrified to see a pile of burnt-out rubble.

Could Kitty have possibly survived?

Kitty had burrowed into Danielle's bedding to shelter herself from the smoke...

And the fresh air from the broken window supplied her with a steady flow of oxygen. “I went into what was left of her apartment," Brad George, Lansing Fire Department deputy chief and Kitty’s rescuer, explained, “I opened her bedroom door and saw her bed and pillows against the wall. I started pulling the pillows back really slowly and I saw black fur. She was breathing. I was like, ‘She’s alive!’"

The poor cat was badly injured...

And had to spend several days recovering at the veterinary emergency room at Cornell University. “The doctors said it’s a miracle she’s alive," Schafer said. “She is a miracle."

Kitty really is one of a kind...

And Danielle credits her for saving the full apartment block. "If she didn’t wake me up, I don’t know if I’d be here right now," Schafer said. “Her waking me up is what helped me save others. I think God was watching. He put these people and these animals in my life for a reason. I rescued Kitty. She rescued me. Then I rescued her back." Keep scrolling for more adorable cat content...