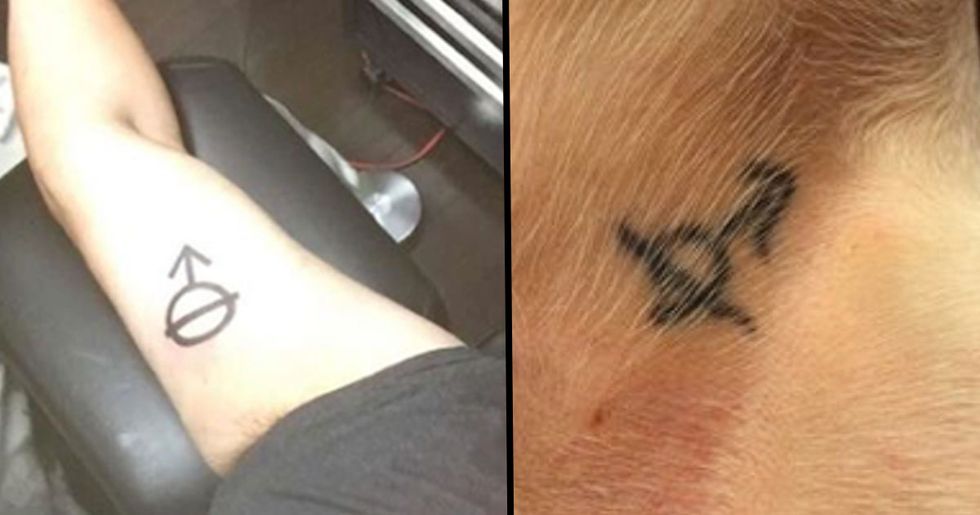 We've seen some pretty bad tattoos in our time. Some were drunken mistakes, some were well-meaning but were executed horribly and some were borne out of sheer stupidity.

But the tattoo that a Texas man, who goes by the name of Chris Mendiola, got as a tribute to his dog really takes the cake. He had good intentions, and the tattoo was executed without complication, but after having the mark put permanently on his body, Chris, we have no doubts, immediately regretted his decision.

We've compiled a list of some of our favorite tattoo fails, so get comfortable, sit back and revel in the satisfaction that you've never done anything quite so foolish.

Tattoos are more popular now than ever.

So it's no wonder that we're seeing so many tattoo fails around these days!

Here are a few statistics.

In a 2018 study that surveyed eighteen different countries, Dalia found information about rates of tattoos around the world. Some of them were surprising...

The study found that 38% of respondents had at least one tattoo.

Some of them were bound to fail, we guess.

And young people didn't have the highest rate of tattoos.

32% of respondents that were aged fourteen to twenty-nine had a tattoo and 45% of people with tattoos were aged thirty to forty-nine.

Tattoos were found to be more popular among those who claimed to have high levels of education.

32% of respondents with tattoos claimed to be highly educated; 26% claimed to have a low level of education.

Italy has the highest number of tattooed people at 48%.

And apparently, 72% of tattoo owners don’t regret getting their tattoo.

What? That one came as a serious shock - especially having seen these horrible tattoo fails!

Let's start with one of our personal faves.

Surely the tattooist knew that this wasn't what she meant... Although we kind of doubt that the artist behind this particular tattoo was a professional.

"Only God Will Juge Me"

Apparently, these dots were supposed to be stars...

"Pretty sure there's some kinda ointment for that," one reddit-user wrote. Yikes.

The spelling. The placement. Everything about this is bad.

This Bon Jovi fail is subtle, but it's all the more wonderful for it.

"It's is now or neveeeeeeer."

If you ever needed a reason to stay in school, here it is.

We're not sure what this guy's intentions were...

But we're delighted with the results to be really honest.

What should have been a meaningful tribute to Freddie Mercury turned into something horrific (or hilarious).

We can't unsee this.

Did someone stand on this woof's foot?

We'll be having nightmares about this one.

We have a feeling that this tattoo turned out exactly as he wanted it to but it's still awful - it's still a huge fail in our eyes. No thank you.

This girl's intentions were good...

But this is a huge fail. We're cringing for her!

Good intentioned tattoos that have turned out to be mistakes seem to be a bit of a theme here.

And this was the case with Chris.

Dogs are the best.

They're man's best friend. We really would do anything for our little furry friends.

And so would Chris.

Chris noticed that his beloved pup, Bear, had a mark on his pelvic area.

And he was sickened by it.

"For those of you know bear know that he has a tattoo given to him from some previous owners," Chris wrote in a Facebook post. "It sickens me to know that people actually tattoo their pets. So tonight I got his tattoo."

It was supposed to be a meaningful sign of solidarity.

But Chris quickly learnt that it wasn't as it seemed.

Turns out, the tattoo wasn't from an abusive ex-owner.

It was a sign that Bear had been neutered. And it had been done by a vet.

And Chris found out in the worst way possible.

Chris, however, insisted that he did it on purpose.

"We talked to our vet about the tattoo. I knew what it meant," he told Buzzfeed.

And neither was the internet.

"Yeah I call BS on his excuse," one Facebook-user wrote.

We think that this tattoo probably was a bit of a fail.

But it's pretty cute anyway! "A lot of people are saying 'I'd do anything for my pet,' but would you?" Mendiola asked. "Would you get a neutered sign tattooed on your bicep?" Well, would you?