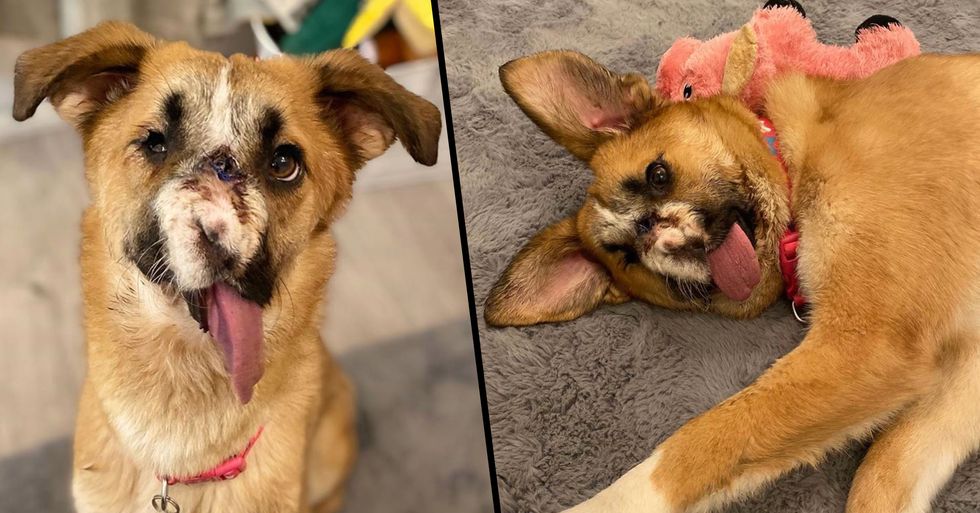 That was certainly the case for one doggo, who endured abuse so severe that it resulted in her losing her nose. Now, she's found a forever home.

And that was sadly the case for one pup named Millie.

Millie remarkably survived being stamped on and shot several times.

She was rescued by Kasey Carlin in Russia where she was a stray dog and was found close to death in the street.

When she was discovered, she was trying to claw the rotting snout away from her face.

After a fundraising effort...

Millie was brought to the U.K. by the Wild at Heart Foundation.

The poor pup had to undergo life-changing surgery.

But she was still left with a floppy tongue and crushed snout.

Despite her injuries, Millie is full of life.

She can even be seen excitedly running towards the vets who operated on her in a heartwarming video. Keep scrolling to take a look.

She's since had further surgeries, however.

And has had to have an eye removed because of bullet shrapnel.

She found her forever home with Kasey.

Kasey is currently looking after 4 dogs, 3 of her own (Mishka, Maggie, and Millie) and one foster (Bella).

Maggie is also disabled, having endured heart-wrenching abuse. She was found in horrific condition in Lebanon, tied to a box with her eyes shot out, her ear cut off, her jaw broken, and bullet wounds all over her body.

And has even been nominated for a national bravery award.

Despite all the trauma she has suffered, Kasey says Millie is now a “very happy dog."

"She’s fully healed and in no pain – the vet’s given her the all-clear. "The only thing I could possibly complain about, but I can’t even complain about it, is that she drools when she’s hungry because she’s missing that part of her jaw. But I drool when I’m hungry too," she added.

Which often sees her attracting a lot of attention from strangers. "Instantly people usually stroke dogs under the chin but she’s a bit dribbly so they go to stroke her on top of the head. But she’s so happy – I’m yet to meet somebody that she’s not won over." What an extraordinary doggo! Interested in more dog content? Keep scrolling to see the woman who came back from vacation with a stray dog…