Rescuers Save Puppy Found in Ashes Amid California Wildfires | 22 Words 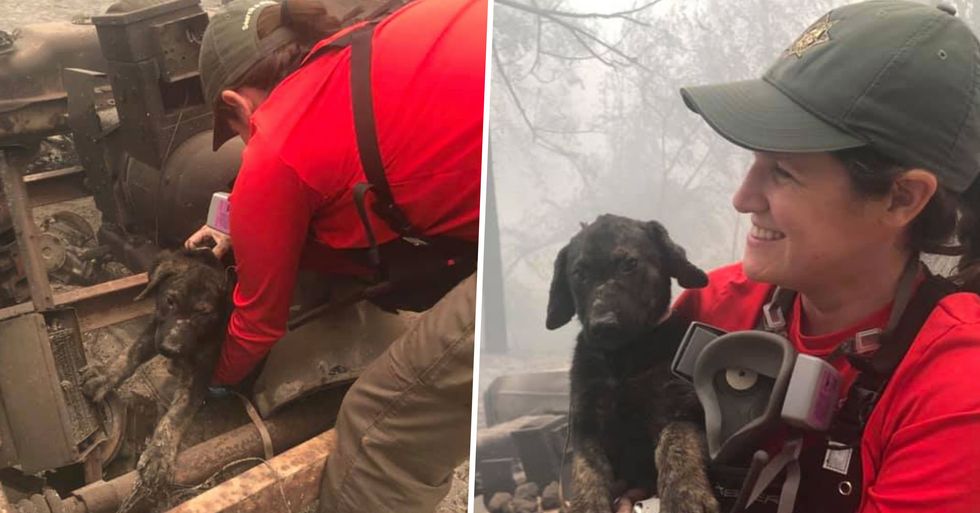 Rescuers Save Puppy Found in Ashes Amid California Wildfires

The death count due the wildfires continues to rise, and as more and more people have been reported missing, firefighters have been searching for any people or animals that could be trapped in the wreckage left behind...

Thousands of residents have been evacuated...

Understandably, people have been left incredibly alarmed by the shocking sights...

The El Dorado Fire, which has grown to more than 10,000 acres, was ignited when a family used a “pyrotechnic device" for a flamboyant gender reveal party. Over six-hundred firefighters were called to tackle the blaze which became so bad that it could even be seen from satellites in space.

California Governor, Gavin Newsom, was forced on Sunday to declare a state of emergency in 5 counties.

So many lives are now at risk...

And according to sources, twenty-nine people have now died as a result of these deadly fires.

Thousands of people have been left homeless while desperately searching for those left behind.

First responders came across a puppy while searching for people left behind in the wreckage of the fires.

As firefighter team in California was scouring the burnt surroundings...

And found an "adorable puppy" in the ashes of a burnt property.

According to the Butte County Sheriff's Office...

They shared the photos on Facebook on Saturday, as well as information about the pup...

The "welcomed discovery" was "unexpected" but put a smile on everyone's faces.

"These last several days have been hard on our entire county and we thought we would share a positive story today. Yesterday, as BCSO deputies and members of BCSO Search and Rescue were searching through properties impacted by the fire, they made an unexpected and welcomed discovery on a large property in Berry Creek, this adorable puppy."

They named the "sweet" dog Trooper...

After rescuing him, they took the pup to Valley Oaks Veterinary Center in Chico, California, to be looked over.

"After doing some investigating, we found out that the owner of the property has several dogs and was not able to locate them all before needing to evacuate."

Finally, we have some good news coming out of the devastating fires.

Although we've still got a long way to go. Keep scrolling for more on the tragic wildfires...