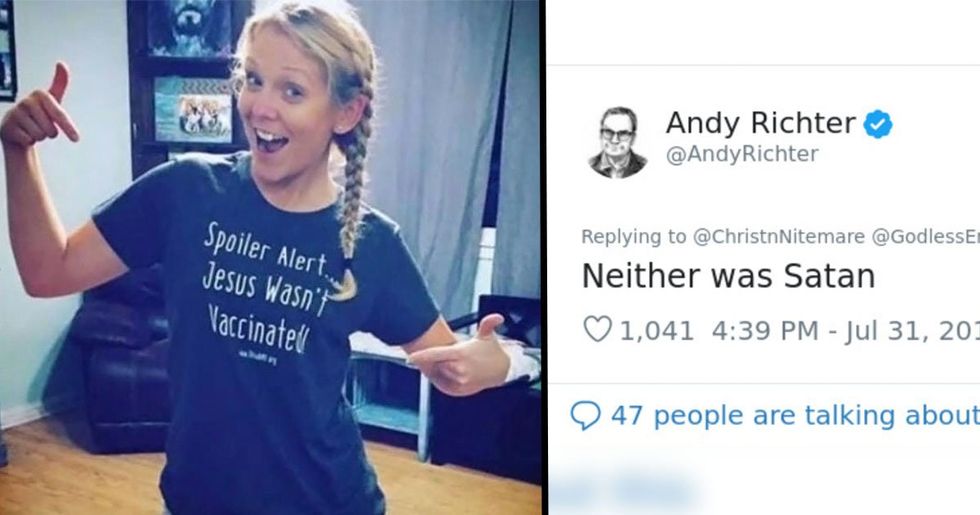 You know when you think that a trend has finally crawled back under the rock that it came from, but it hasn't, well, the way you feel when that happens is exactly how I feel about this whole "anti-vax" thing. It seems as if logic is not going to prevail with followers of this weird trend. Some of us normal folk are here to set the record straight for all the anti-vaxxers who still believe that the government is using vaccinations to "control" us all.

And the internet sometimes has the best ways of striking back. Check out some of these hilarious responses to an anti-vaxxer who was proudly showing off her "Jesus Wasn't Vaccinated" t-shirt.

Let me set the scene for you.

A picture of a woman, who was sporting a t-shirt proclaiming "Spoiler Alert… Jesus Wasn’t Vaccinated," was posted online.

The photograph has since gone viral.

And this is mainly because of the hilarious responses that pro-vaxxers had in retaliation to the slogan.

The war of words remains constant between the two groups.

I don't think that the passionate members on either side are ever going to call a truce, but how can you, if your views differ to such an extent?

So, while they keep arguing, let's take a look at some funny replies to "Jesus wasn't vaccinated."

Um... technically, this is true.

Stephen is just here to hit you with the facts.

This one was a double whammy.

I mean, if she can have her opinion on a t-shirt, Shawn can post his to Twitter.

The reason why anti-vaxxers had to resort to using Jesus' name is that they don't have much else to back-up their claims. Am I right?

I mean, you would expect the son of God to be as close to invincible as a man can be, right?

8. Cause of death: rusty nails.

I mean, it's viable.

Here's one piece of Jesus' advice that I will not be following.

There's a higher chance of Jesus wearing band tees than anti-vax ones.

We see through you.

The quirky and witty replies have us cringing while simultaneously laughing.

"Jesus" replied to the post and claimed that he was, in fact, vaccinated.

Jesus had another life waiting for him, while the children on this Earth, do not.

You can't misuse that phrase! People take it very seriously...

@ChristnNitemare @GodlessEngineer @AndyRichter Sheer stupidity. Ever hear of plagues? It would still be going on if… https://t.co/fljNgwA24G
— Laurie O'Brien (@Laurie O'Brien)1564681763.0

Here's a bit of advice for all the anti-vaxxers.

If you can't turn water into wine, vaccinate your kids.

Sadly, as rich as your dad may be, he still can't cure illnesses the way that God can.

Pretty much sums up our reactions to the whole concept of "Anti-Vax."

So, what have we learned from this?

Don't drag Jesus' name into arguments that it does not belong in unless you want to be trolled online. And, also, vaccinate your kids.