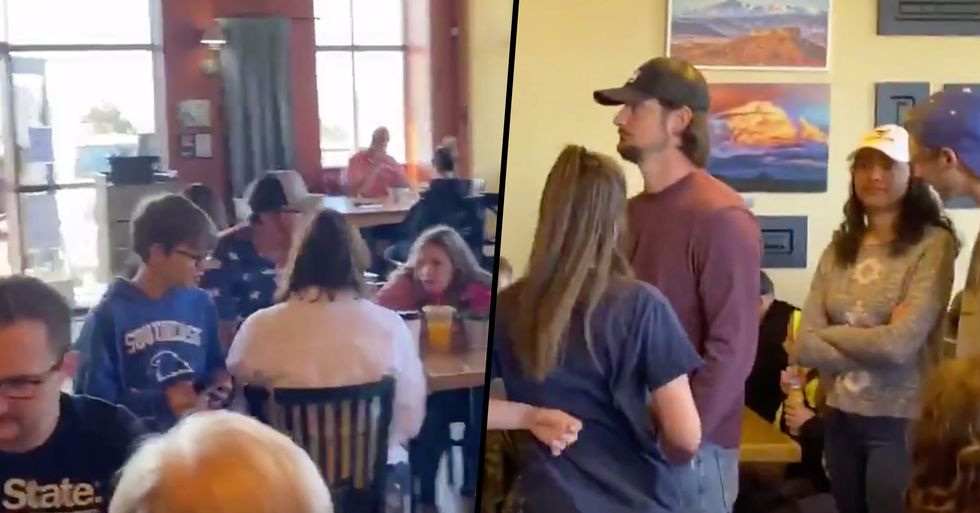 A restaurant owner in Colorado has defied social distancing orders and re-opened to hundreds. And now he's attempted to defend his controversial decision...

Keep scrolling for the shocking video from inside the restaurant and for his reasoning behind the move.

President Trump recently announced that the federal guidelines on social distancing have been extended for at least another thirty days in a desperate attempt to regain control.

But this week, some businesses have been found to be defying social distancing orders...

Including one restaurant in Colorado, whose owner is facing backlash after re-opening to hundreds.

They went against Democratic Gov. Jared Polis's order for restaurants to keep their dine-in services closed to prevent the spread of the virus.

Nick Puckett, a reporter for Colorado Community Media, recorded a video from inside the restaurant when it re-opened.

The now-viral video showed the eatery packed with customers.

Nearly all of the customers in the video were not social distancing or wearing masks.

It makes for shocking viewing.

The Tri-County Health Department (TCHD), which is in charge of enforcing the governor's order in Castle Rock, were forced to intervene.

And ordered C&C Breakfast & Korean Kitchen to close immediately on Monday afternoon. "Despite the warning, the restaurant was opened to dine in eating on May 10 in violation of Public Health Orders issued by the Colorado Department of Public Health and Environment (CDPHE)," TCHD said in a statement.

The restaurant has been ordered to remain closed until the health department is satisfied it is in compliance with the public health order.

"If the restaurant refuses to follow Governor Polis’ Public Health Order, further legal action will be taken that could include revocation of the restaurant’s license," TCHD said.

Now, Jesse has attempted to defend his actions.

"We're okay with two or three weeks," he said in an interview with KOA NewsRadio on Monday. "But we're going on two months now, and then we heard the governor say that maybe we'll open by Memorial Day. And that's ridiculous. If everything else is opening up with restrictions, why can't we open with the same restrictions or something similar?"

"People were just coming, so there was no stopping them. "People wanted their freedom."

Jesse went on to explain that he did not order his employees to wear masks but asked them to wear gloves.

He added that "none of the customers seemed afraid" to be inside the restaurant and employees didn't have to come into work if they didn't want to.