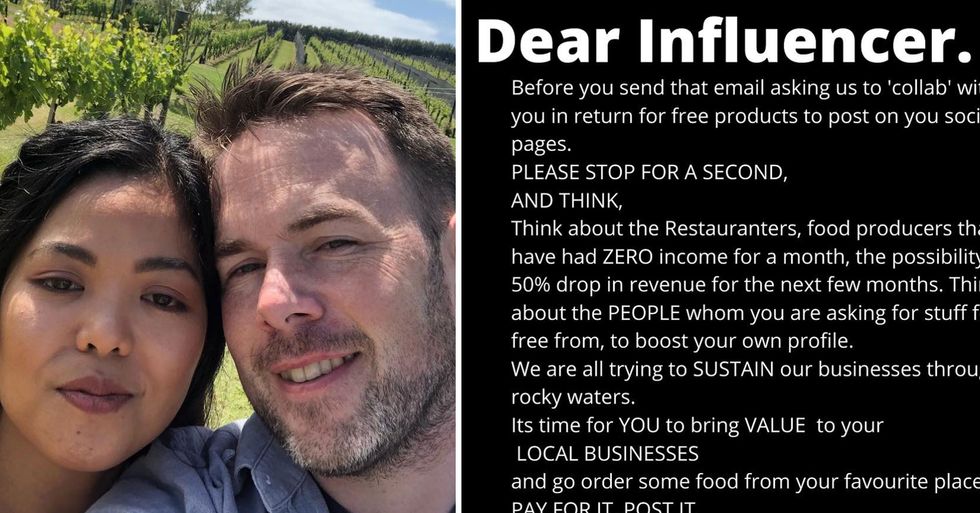 With the rise of the Instagram influencer, it's easy to feel inferior or even envious. When faced with snaps of lavish vacations, plush apartments, designer clothes, and the ideal body, it's no wonder so many of us are left feeling pretty crap about our own lives.

But sometimes we forget that just because they're living "better lives" (which is debatable anyway) they are in no way better people. And even during this outbreak, we've got evidence of that.

Keep scrolling to see what one business owner wrote after being asked for free food repeatedly.

Whether you like it or not, Instagram influencers are now a big part of the social media landscape.

With their lavish lifestyles, jealousy-inducing getaways, and seemingly "perfect" lives, those rising in the ranks of Instagram stardom truly are making the big bucks.

We doubt many people would turn down the chance to earn a living from posting on Instagram.

But we all know that what we see online isn't always the reality.

The perfectly crafted, edited snap you're comparing yourself to? Or the luxury sponsored getaway you'd never be able to afford? It may all seem great on the surface, but we all know that influencers (or anyone, really) only showcase the highlights on their profiles.

The bad stuff often gets left out.

Many stars have come out and admitted that what you see online is far from reality and that influencers are real people with real problems, just like anyone else. And for some, enough is enough... Read on to see what one man did after he reached a boiling point.

For many online stars, there's a pressure to keep going.

After all, with potentially millions of fans to please, it must be hard to press pause on portraying a polished "life..."

...Even during a pandemic.

Given the current climate of the world, you would think that influencers would crawl back into their shells or at least do their best to raise awareness about issues from mental health to financial crises.

But no, as some countries start easing their lockdown regulations...

The influencers are back at it again.

They have always had a bad reputation when it comes to asking for "free stuff."

I don't know what entitles them to do this, maybe it's just the entire "influencer" label that gives them the right to exploit others, I really don't know, but it's not a cute look.

As if they have the right to demand free products off of businesses that require a profit to keep going.

The entire thing is absurd to me. Free services for a few extra followers? Are these followers going to pay rent and bills?

Well, one man had had enough.

As New Zeland lowers their crisis level down to 3 on the chart, businesses are allowed to start opening again and for Brian Campbell, it is a blessing.

Being shut for weeks meant his business was already suffering...

Even though the stores can't physically open, he has started taking online orders.

And of course, after a long break, he was happy to be back in business again.

But within minutes, he was getting messages he did not expect.

A flock of shameless influencers decided they would directly message Campbell and offer him "promotional posts" in exchange for free desserts.

He told Buzzfeed News that the day started off with only one message...

But by the end of his shift, he had "five or six" of the same ones in his inbox.

Even though he replied to them all individually, he then decided to pen out a letter to everyone.

Keep scrolling for the full post. He started like this: "Dear Influencer. Before you send that email asking us to collab with you in return for free products to post on your social media pages...Please stop and think for a second."

"Think about the Restauranters, food producers that have had ZERO income for a month, the possibility of 50% drop in revenue for the next few months. Think about the PEOPLE whom you are asking for stuff for free from, to boost your own profile."

And then he gave them a little bit of advice:

"It’s time for YOU to bring VALUE to your LOCAL BUSINESSES and go order some food from your favourite places, PAY FOR IT, POST IT, FEEL GOOD ABOUT IT. YOU JUST HELPED A SMALL BUSINESS!"

Campbell said he had no ill feelings towards the influencer trend but during these difficult times, it was just too much.

He told Buzzfeed News this: "I think a lot of people don’t understand what we’re going through. Going from having business to having zero business is quite a tough situation to be in. We’re supporting families, trying to keep our staff employed."

It really put a downer on his day.

"Literally, in 10 minutes, I was getting messages from influencers requesting that we send free stuff so they could post it on their profile. I was like, f******g hell, this is such a p*** take."

We're glad someone's speaking out. And if you're an influencer, use your platform for good. Pay the price and post it on your social media. It's not hard. Keep scrolling to see how another business decided they were going to shut down this influencer after he tried asking for free drinks...