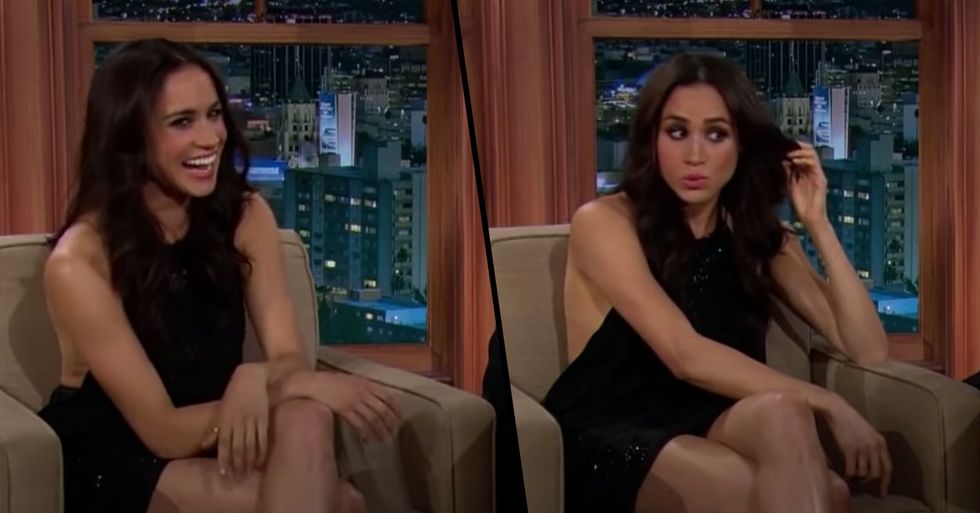 Fans have unearthed a "creepy" video of Meghan Markle being interviewed during her early career and they can't believe what they are seeing.

It's a very uncomfortable watch...

A resurfaced clip of Meghan Markle has got the whole internet talking.

In recent months, Meghan has been doing her best to try and stay out of the limelight...

The star's approach to media appearances has taken a complete U-turn compared with her former acting days.

But back when her on-screen career was taking off...

The future royal would regularly step in front of the cameras to be interviewed.

But, it seems one unearthed clip has been causing quite a stir...

It's certainly an uncomfortable watch.

They seem to be settling much more into a quieter and more normal family life.

But this week, fans have unearthed an old clip of Meghan during her acting career.

The clip in question was filmed in 2013 while the star was promoting Suits on The Late Late Show where Scottish comedian Craig Ferguson, can be seen making several remarks.

When Meghan sat opposite the host...

He can be heard saying: "Why, you look sensational. You really look well!"

Meghan explained that she was “born and raised" in Los Angeles...

In a joke about there not being many natives left in the south Californian city, she said: "Yes, I’m one of the 5. You can pinch me, I’m real!" He then responded with "Wow, yeah" as he clutched at Meghan’s arm before going on to try and do it again a number of times before the star rejected it with a firm “No."

He went on to make an uncomfortable comment that left people online hailing him as completely creepy.

“I just wanted to do it again... what a strangely hairless body you have."

“Oh you’re quite the dolphin, aren’t you? I tell you, you’re absolutely hair-free."

“I am not but if I were to be one, I think I would get some speed there," she responded to the bizarre comments. “That’s what you need to do if you’re a competitive swimmer, shave yourself entirely," Craig added.

For on Meghan, scroll on to find out why she is suing a photographer over a picture of baby Archie...