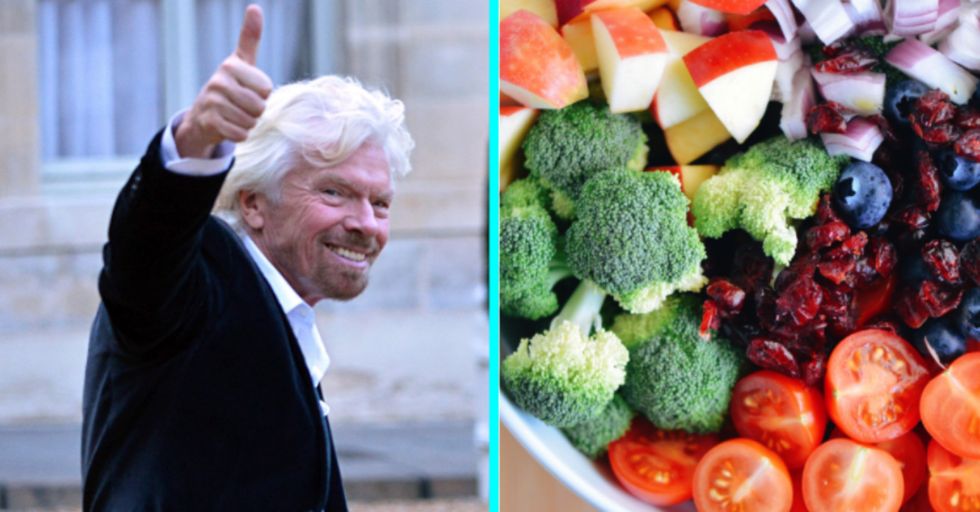 Billionaire entrepreneur Richard Branson recently made a surprising prediction about how we'll eat in the future. In just a few short decades, Branson estimates that we'll no longer be consuming meat, and the need to kill animals for the purpose of nutrition will be eliminated.

Before all you meat-eaters start rioting in the streets, wait until you hear the full story.

Branson made the following statement to Bloomberg News about an idea that would drastically change our food system.

"I believe that in 30 years or so we will no longer need to kill any animals and that all meat will either be clean or plant-based, taste the same and also be much healthier for everyone," said Branson.

And what does Branson mean by "clean" meat?

That's exactly where the story gets a bit more interesting. Along with billionaire Bill Gates, Branson recently invested in Memphis Meats, a company that makes "slaughter-free" meat derived from animal cells.

The "clean meat" venture seems to be the wave of the future, with similar companies such as the Finless Foods, Just (formerly Hampton Creek), and the UK-based MosaMeat following suit.

The Memphis Meats website explains it like this: "Our current meat production system creates challenges for the environment, animal welfare and human health. With global consumers spending nearly $1 trillion per year on meat, and demand for meat expected to double in the coming decades, one thing is clear: we need a better way to feed a hungry world."

The company claims to be developing a way to create real meat solely from the cells of animals.

"We expect our products to be better for the environment (requiring up to 90 percent fewer greenhouse gas emissions, land and water than conventionally-produced meat), the animals and public health. And most importantly, they're delicious," says the website.

Memphis Meats is based in the San Francisco Bay area.

Other well-known investors other than Branson and Gates include Jack and Suzy Welch. Jack is the former CEO of General Electric and Suzy is a best-selling author.

MosaMeat, a competitor of Memphis Meats, claims to have created "the world’s first tissue cultured hamburger."

"MosaMeat aims to develop tissue engineering into a technology that can mass-produce affordable meat. We are a spin-out from the lab of Prof. Dr. Mark Post at Maastricht University: the lab that created the world’s first tissue cultured hamburger," reads a statement on the homepage.

This idea of a world where carnivores can still devour the meats they desire without slaughtering animals is intriguing.

But how does it work? It's a complicated process, but MosaMeat explains the technology behind the meat revolution in great detail on its website.

"The production of cultured meat starts with harvesting so-called adult stem cells (aka satellite cells) from the muscle tissue of a living cow."

"Satellite cells are cells in the muscle tissue that are there to create new muscle tissue when the muscle is injured, and It is exactly this inherent talent of the stem cells that will be used in a cultured meat production system."

"The cells are isolated from a muscle sample and then brought in a bio reactor to multiply, resulting into very high quantities."

"When the cell mass is big enough, the satellite cells are harvested and then triggered to differentiate into muscle tissue; in this final step, the structure and texture of the meat are built."

"The cell culturing process allows for much more control over the production process and over the composition of the meat (nutrients, fat, taste, etc.)."

Surprisingly enough, Winston Churchill made an estimation very similar to Branson's back in 1931, regarding this type of food source. "We shall escape the absurdity of growing a whole chicken in order to eat the breast or wing, by growing these parts separately under a suitable medium," Churchill wrote in an essay titled "Fifty Years Hence" for Strand Magazine.

"Synthetic food will, of course, also be used in the future."

"Nor need the pleasures of the table be banished. That gloomy Utopia of tabloid meals need never be invaded. The new foods will from the outset be practically indistinguishable from the natural products, and any changes will be so gradual as to escape observation."

Will Churchill and Branson's hypotheses turn out to be true?

Whether or not Branson's statements were mostly made to support his $17-million investment, with our planet's quickly depleting resources, these types of ideas could help us to reverse some of the damage we've already done to the earth. And that's something that both humans and animals can get behind.