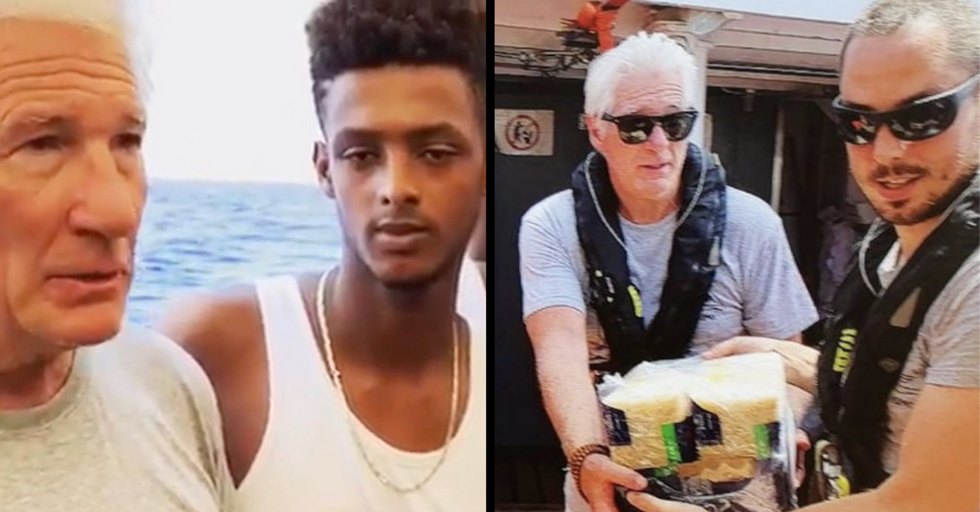 Not only is the Academy Award winner still looking hot at the ripe old age of 69, but he's also saving people's lives. Thanks, Richard. Gere's activism isn't entirely unknown, either. Back in 1993, he was banned from presenting awards at the Oscars after speaking out about the Chinese government during the televised ceremony.

But his censorship from the event hasn't stopped him. Gere has routinely donated and volunteered for AIDS awareness causes and even has a charity that supports various humanitarian programs in India.

The point is, Richard Gere is a really good guy. And we need good people like him right now.

In the United States, we're hearing a lot of horror stories about the way immigrants and refugees are being treated.

And while racism directed toward immigrants and people of color has always been bad, it feels like things are getting worse than ever.

Mostly because of Trump.

Just this month he told four congresswomen they should go back to their countries. And apart from people hating him even more, he got away with it.

After that, he went after Baltimore.

Calling it rat-infested, and a mess, ignoring that Trump's own personality is rat-infested and a mess. But he doesn't care. He plays the antagonist and the victim at the same time, somehow.

So putting all of that aside, here's a positive story about a group of migrants be helped rather than shunned.

Richard Gere took time off from his Italian vacation in order to boat some food and water to a group of migrants stranded in the Mediterranean, according to the Associated Press.

Gere was shocked when he heard headlines about the stranded refugees.

For ten days, a group of migrants fleeing Libya we stuck in political limbo in the middle of the ocean with food and water running out fast.

The refugees were originally on rafts and "unseaworthy boats" with smugglers.

That is until they were picked up by Spanish humanitarian ship Open Arms in the middle of the Mediterranean. All 121 of them, including 32 children.

Gere saw the headlines and wanted to do something about it.

So he got in touch with the folks at Open Arms with a simple question. "How can I help?"

And on Friday, he and his family took action.

Gere was vacationing in Italy at the time, so he packed up his things on the island of Lampedusa, threw a bunch of food and water on a boat, and took the trip out to sea.

Gere has certainly bought the refugees more time, but the work isn't done.

They are still stuck out on the ocean because Italy and Malta are refusing to let them dock.

See, European Union agreements state that any migrants rescued need to be taken to the nearest safe haven.

This case, being docks in either Malta or Italy. But Malta and Italy aren't letting the ship dock.

Their position is firm.

They think other countries in the EU need to be letting in more refugees before they do. Which on one hand makes sense, because those countries are much closer to the conflicts. And on the other hand makes no sense, because, that's a shitty thing to do.

So Open Arms has called on the French, German and Spanish governments to help.

So far, radio silence from those four countries. And if the ship does decide "eff it, we're docking in Italy", they'll be fined over $1 million.

So Gere's generosity will only go so far.

Especially because some of the refugees and migrants are in dire condition.

The director of Open Arms says that “90 percent of those on board have been raped and tortured and need urgent medical assistance."

That, unfortunately, includes those 32 children. So far, no countries are ready to let the ship dock and are offering only minimal assistance.

Three women have been able to leave the boat and reach Italian shores.

Two of whom are very pregnant, and one of their sisters.

But the two 9-month-old twins remain on board.

Here is a video of Gere with one of the babies.

Gere's wife, activist Alejandra Silva, was also on board.

She said, “the most important thing for these people here is to a free port, be able to get off the boat and get on land and start a new life. Be taken care of — and make a life for themselves. So, please, support us here at Open Arms and help these people, our brothers and sisters."

Their old homes are not safe and uninhabitable. We can only hope that the EU will step in and help in some way.

What do you think about Gere?

It was definitely a wonderful gesture, but do you think he should have done more?

Let us know how you feel in the comments!

And as it turns out, Richard Gere isn't the only celebrity saving lives this week...