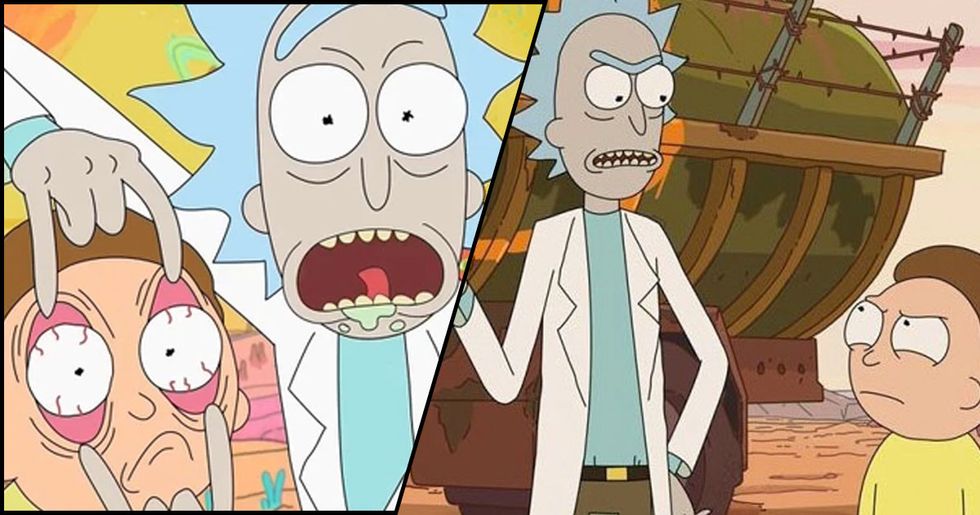 ‘Rick and Morty’ Season 4 Has Dropped

It's been 2 long years since Rick and Morty was last on our screens and fans have been eager to fill the intergalactic adventure-sized hole in their lives.  For those unfamiliar, the 30-minute animated show is a little bit like a cross between Back to the Future and a David Cronenberg movie, with a lot of dark humor thrown in for good measure... and it's proved pretty popular with viewers.

Our prayers were answered earlier this year when season 4 of the animated dark comedy was announced. Though disappointingly, we were only in for a 5 episode stint, either-way it meant we got some fresh mad scientist content to binge-watch.

After months of waiting, the time has finally come - the long-anticipated season 4 premiere will be hitting screens tonight. So, keep scrolling to find out everything you need to know about the new season.

It's been 2 years since we've last had our Rick and Morty fix.

The smash-hit sci-fi animation wrapped up its third season back in 2017 - leaving a weighty mad-scientist shaped void in our lives.

Work on season four has been ongoing, but no one knew when (or if) it would ever come out.

So what can fans expect from the fourth season?

Well, you'll be pleased to know it looks like it's going to be packed full of even more bonkers antics and "what the hell" moments as its predecessors.

News of the new season was announced back in May this year.

And of course, since the news broke, fans have been quick to theorize what they think the season will entail.

Because between the Szechuan sauce and yelling at people on the internet, Rick and Morty fans can be a little intense. So rumors have been swirling.

A cameo from Kanye West was among the most popular rumors...

Having Kanye West hanging out with the eccentric Morty sounds like a recipe for some of the funniest episodes of the series, but this isn’t exactly concrete proof that Kanye will appear on the show.

The official trailer dropped last month, and from what we've seen, it's shaped up to be a pretty wacky spectacle.

In usual Rick and Morty style, the pair appear to get caught up in even more mayhem. During the long-awaited trailer, we see Morty narrowly escape laser-blasting attackers, fall from a sheer cliff, get involved in some kind of altercation with a dragon and turn into a vicious monster.

There is a downside, however...

All the fresh intergalactic content will be packed into a five-episode run instead of the usual ten.

News of the shorter season had left some fans pretty upset.

But we're sure the creators will have something special up their sleeve to make up for it. Maybe longer episodes? Probably wishful thinking... but you can always hope.

Or it could be a half-season...

There may not be cause to panic, as the second set of episodes may drop at a later date. Phew.

So, we guess you're all desperate to know when you can watch...

Season 4 will air weekly on Adult Swim at 11.30pm, starting tonight with an episode titled Edge of Tomorty: Rick Die Repeat.  The official synopsis for each episode has been revealed but, as usual, it gave pretty much nothing away.

For a glimpse at what's in store, check out the season 4 trailer below:

Happy watching! Rick and Morty isn't the only hit show set to return very soon. Brooklyn Nine-Nine season 7 will reportedly drop on February 6th. Keep scrolling for all the details...