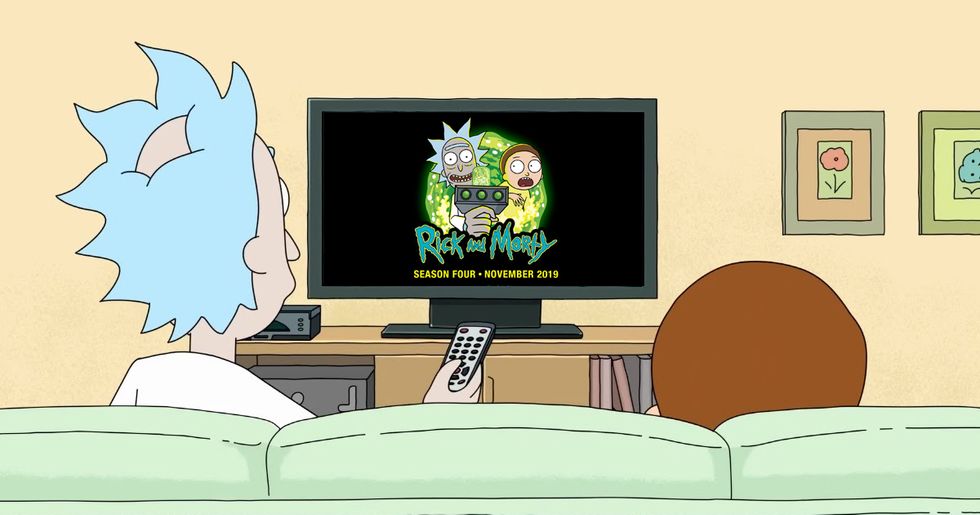 'Rick and Morty' Season Four Is Finally Coming This November

Oh geez, guys. It's official. Rick and Morty is coming back, and it's coming back soon. For those unfamiliar, the 30-minute animated show is a little bit like a cross between Back to the Future and a David Cronenberg movie, with a lot of dark humor thrown in for good measure.

It's been two years since season 3 dropped, and fans have been eagerly looking forward to news about its newest season. So today, the Adult Swim YouTube channel put out the 30-second announcement video. It's the first new Rick and Morty footage released since a sneak peek at a Deadmaus concert from a few months ago. We have that video too!

Maybe they'll drop another secret episode on us sometime in the near future, but for now, the long wait continues. Stick around for some insights into what fans can expect this season, some of our favorite moments from past Rick and Morty seasons, and what the show's creators have to say about the most challenging season yet.

Fans have been waiting years for an announcement.

Because, if there's anything Rick and Morty fans are used to, it's waiting.

Work on season four has been ongoing, but no one knew when (or if) it would ever come out.

So a lot of fans thought we'd have a new season by now.

But thankfully, the wait will only last a little bit longer.

The announcement came from a video Adult Swim put on their YouTube channel.

It features both Rick and Morty awkwardly announcing the new season.

No word on an exact release date yet.

But hopefully, it's not November 30th. I have an appointment that day.

Co-Creators Dan Harmon and Justin Roiland were at Viacom's Upfronts presentation when the news was announced to the crowd.

Just casually social media-ing. I'm guessing those emojis (???? ) are just random emojis and not clues to the upcoming season, but I'm sure hardcore fans will figure out a connection if there is one!

So what can fans expect from the fourth season?

Well, in terms of actual footage, this YouTube video is all we have so far. But at least it's pretty funny. Keep scrolling to watch! No trailer, no poster, no clip. Nothing!

But there have been rumors.

Because between the Szechuan sauce and yelling at people on the internet, Rick and Morty fans can be a little intense. So rumors have been swirling.

Personally, having Kanye West hanging out with the eccentric Morty sounds like a recipe for some of the funniest episodes of the series, but this isn't exactly concrete proof that Kanye will appear on the show.

Though Kanye did tweet out some art a few months later that could suggest he and Kim will appear in the show in some capacity.

This has more of a "fan art" vibe to me, but again, who knows!

So that could happen.

Kanye is a self-proclaimed huge fan of the show so I wouldn't be surprised if he showed up to do a couple of voices either.

Just today, Dan Harmon told Kanye he could have his own episode.

So maybe this is another hint of what's to come, or maybe it means we won't see Kanye until season 5.

Here's what Radcliffe had to say in response.

He seems too excited, and that's absolutely adorable. Please make this happen!

One of the writers for the show, Jeff Loveness, took the opportunity to get a much-needed message out there.

If I had to choose between new Rick and Morty and the president getting impeached, I'm just saying it wouldn't be a hard choice. And I love Rick and Morty.

He went on to talk about his experience in the writer's room.

And before you say, "he should just stick to writing," don't you think that's a little hypocritical considering where the president started?

So I guess she's just as annoyed with people asking her when season 4 was dropping as we were with Adult Swim not giving us any new info. Which is fair.

Seems like some of the writers haven't even seen the finished animation! November can't come soon enough.

Check out the video for yourself, here.

This is the first footage of the new season, unless you count this weird exclusive clip from a New Years even Deadmaus concert.

But it's not going to be in the show, so does it even count?

And finally, here are our favorite fan reactions to the news. Because you knew Rick and Morty fans wouldn't be quiet about this announcement.

McDonald's really should have just put Szechuan sauce back on their menu permanently. Oh well...

Truly, Rick and Morty has been consistently good because they take their time. But the wait has been so long!

More episodes are on their way!

I had no idea that they were making so many more episodes. That's a huge commitment. Especially when most of their seasons have only been 10 episodes.

It's the perfect music to get you in the mood for the show. Best theme song on TV. Eat your heart out, Game of Thrones.

Poor Rose will never get to see season 4 at this rate.

Everybody do a weird dance.

This is basically my mood this entire day.

Give me bearded Mr. Poopy Butthole!

Can I say Mr. Poopy Butthole on this program? I'm not sure. Let's find out.

This is also my mood all day.

I will alternate between dancing and freaking the freak out.

Just give us the dang show already.

I need it! I needed it last year. Please, Adult Swim. What did we do to deserve this long wait?