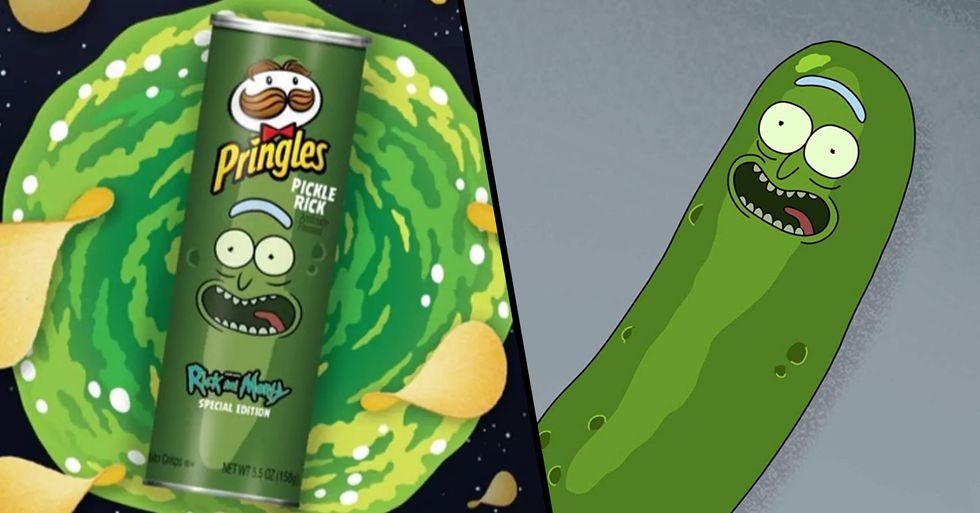 Rick and Morty Team up with Pringles for Pickle Rick Flavor

Rick and Morty have dominated the scene since the release of its fourth season last month.

For those unfamiliar, the 30-minute animated show is a little bit like a cross between Back to the Future and a David Cronenberg movie, with a lot of dark humor thrown in for good measure... and it's proved pretty popular with viewers.

But for some, the recent season 4 of the show simply wasn't enough... so Pringles have stepped in to save the day.

It's been 2 years since we've last had our Rick and Morty fix.

The smash-hit sci-fi animation wrapped up its third season back in 2017 - leaving a weighty mad-scientist shaped void in our lives.

Rumors earlier in the year began to spread in regard to the fourth season...

News of the new season was finally announced back in May this year.

It went down so well, in fact, that it scored an amazing one hundred percent on Rotten Tomatoes.

But this isn't the only good Rick and Morty news...

If the release of season 4 wasn't enough for you all, Pringles have announced something pretty exciting.

Every Rick and Morty fan will know who Pickle Rick is...

Pickle Rick was the episode in season 3 when Rick, believe it or not, was transformed into a talking pickle.

Fans of this episode are in for a real treat now Pringles have announced that they are releasing a very special "Pickle Rick" edition.

The "Once You Pop You Can't Stop" chip company has decided to make a limited offering of pickle-flavored chips for their American customers.

There's only a couple of months to enjoy these bad boys...

The new flavor will be dished out until the Super Bowl next year in February.

The pringles have been created in aid of the Super Bowl...

Gareth Maguire, senior director of marketing for Pringles said in a statement, "We want to do something completely new for the brand for the 2020 Big Game and are thrilled to be partnering with Adult Swim and Rick and Morty, a show which continues to grow in popularity year after year and enjoys a cult fan following."

The flavor is expected to be successful.

"We hope the new special edition Pickle Rick flavor will be a hit with the show's fans."

Those sentiments were also backed up by Adult Swim...

Senior vice president for marketing and partnerships Jill King said, "We're very thoughtful about who we partner with around Rick and Morty and we couldn't be more pleased with our new relationship with Pringles."

Stock up on your Pickle Rick pringles while you can!

"Not only are the Rick and Morty show creators making a hilarious spot for the Big Game, we're extending this partnership in really exciting ways, all year long. Rick and Morty fans are going to be given amazing new opportunities to illustrate their love for this iconic show, thanks to Pringles," she went on to say.