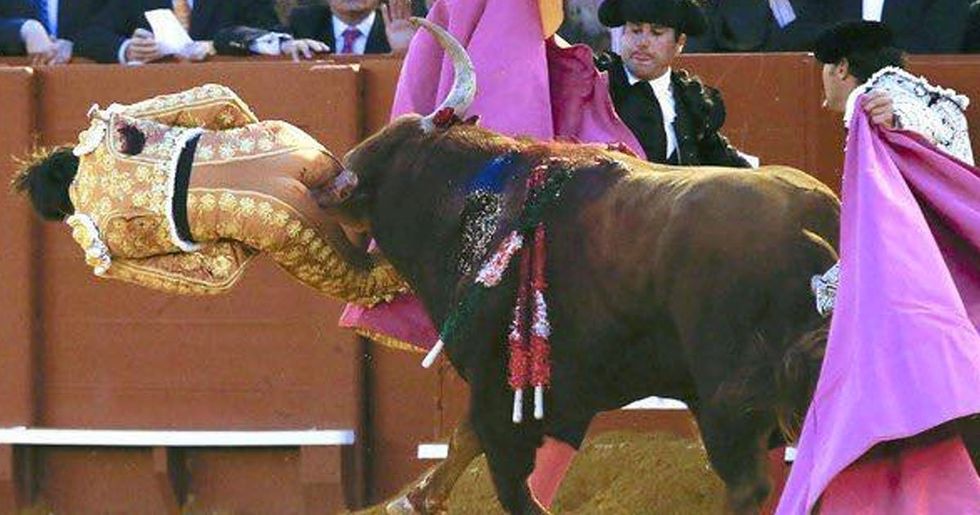 Ah, Ricky, what have you said this time?

Ricky Gervais is an English comedian, actor, writer, director and screenwriter. Star of the beloved The Office (UK), The Invention of Lying, and, more recently, Netflix's After Life, Gervais is known for his pretty controversial jokes and opinions. Whether its concerning religion or the treatment of animals, Gervais' statements frequently cause a stir on the internet.

This wasn't even his most brutal moment, keep reading for a list of some of Gervais' most controversial moments to date, and to hear more on what he recently had to say about bullfighting.

He's a funny guy. He's given us a ton of laughs over the years in the UK's The Office, in his stand-up shows, and in movies like The Invention of Lying.

Most recently, Gervais starred in Netflix's After Life.

The show was created, executive produced and directed by Gervais himself.

After Life tells the story of a man struggling to cope after he loses his wife of twenty-five years to cancer.

The show is dark, there's no doubt about that. Tony struggles with depression and some very serious issues are dealt with in the series, but the overwhelming feeling is one of joy and of hope. It's funny, too.

"This is a show worth watching because the tight-rope it’s managing to walk is nothing short of astounding."

Forbes gave a pretty glowing review of the series, writing, "It’s a project that makes one want to stand up and say, 'well done, Ricky. More of that please.'"

Like much of Gervais' work, though, After Life divided opinions.

"The two Gervaises — the angel and devil sitting on his own shoulders — uneasily swap custody of After Life [...] Here’s hoping their next collaboration turns out better," The New York Times wrote.

Much of the frustration that people seem to feel about Gervais comes from the fact that he really seems to try to be controversial.

As The New York Times put it, "There’s Bad Ricky, the smirking cynic who revels in shock and insult and 'Sorry, did I offend you?' And there’s Saint Ricky, the sentimentalist sad clown, who favors pathos and big emotional windups set to Cat Stevens."

This has meant that people's opinions of him are all over the place.

He's kind to animals but makes sexist, racist and some downright cruel jokes.

Here's what he's had to say about it all:

"A comedian's job isn't just to make people laugh, it's to make them think. If there's a meaning to it, and a substance and a bit of a depth, then you're doing something. Now, here's the rub: offence, is never given, its taken. If you're not offended by something, then there was no offence, it's as simple as that. If you are offended by something, walk away. I'm offended by things all the time but I haven't got the right not to be offended," Gervais said in an interview.

And, of course, he added his favorite line:

"Just because someone is offended it doesn't mean they're right."

But Gervais has certainly offended a lot of people in his time - or they've taken offence to his perfectly innocent remarks...

Here's a quick rundown of a few of the many controversial things that Ricky's said over the years.

Ricky Gervais has hosted the Golden Globes on several occasions. Each time he told at least one joke that went down pretty badly. In 2010, Gervais spoke about the reach of Hollywood: “Actors aren’t just loved here in Hollywood, they are loved the world over. You could be in the third world and get a glimpse of a Hollywood star and it could make you feel a little bit better. You could be a little Asian child with no possessions and no money. But you could see a picture of Angelina Jolie and you’d think, ‘Mummy!’" Yikes.

It was Charlie Sheen, Hugh Hefner and Hefner's wife, Crystal Harris, that were hit at the 2011 Golden Globes.

"It's going to be a night of partying and heavy drinking – or as Charlie Sheen calls it: breakfast," Gervais joked. Later in the show, Ricky took aim at Hugh Hefner and his wife-to-be: "Talking of The Walking Dead, congratulations to Hugh Hefner, who is getting married at age 84 to 24-year-old beauty Crystal Harris. When asked why she was marrying him, she said, 'He lied about his age. He told me he was 94'. Just don't look at it when you touch it."

This time, Gervais suggested that Madonna's song, "Like A Virgin" was at odds with her love life and made a quip about Jodie Foster, an actress who starred alongside Mel Gibson in The Beaver and who just so happens to be a lesbian: “Jodie Foster’s Beaver," he said, “I haven't seen it myself. I've spoken to a lot of guys here, they haven't seen it either".

This one was real bad. Gervais claimed that he would take it easy with the controversial comments that year, saying that he'd "changed". "Not as much as Bruce Jenner, obviously," he added. "She became a role model for trans people everywhere, showing great bravery in breaking down barriers and destroying stereotypes. She didn't do a lot for women drivers, but you can't do everything," referring to a car crash that Caitlyn was involved in 2015. It gets worse...

A dead name is a trans person's name before the transition was made, so Caitlyn's dead name is "Bruce". According to Indy100, Gervais used it fifteen times in Humanity.

She told Indy100, "Dead-naming is such a horrifying thing to do to any trans person because it says that their true identity and their authentic self and the steps they have taken to be recognised by society more authentically can be snatched away at any time. It’s also just courtesy. If you change your name that is your name and people should respect it."

We mean, he speaks about his atheism a lot.

Which is fine, we guess.

But nobody really seems to be all that offended by his comments (the man's allowed an opinion), but he still seems to think that his atheism is edgy and it really riles people up.

So that's a quick list of (some of) Gervais' controversies over the years.

And, recently, Gervais has spoken out about something else.

Gervais has long been standing up for animal rights.

In fact, in Humanity, Gervais says, "I'm really into anti-animal cruelty...I've been involved in many campaigns where people have signed petitions and the law has been changed. So thank-you to anyone who has ever retweeted anything to do with animal cruelty because it really makes a difference."

In 2015, Gervais spoke out against hunting.

According to Elephant Journal, the post was "retweeted over 38,000 times on Twitter and was shared thousands of times across various social media sites".

He hopes to raise awareness of the horrible treatment of animals and to do what he can to put an end to it.

"Thank you for doing the stuff you do. I can't even bring myself to look at what those monsters do. We need you!," Twitter-user, @ScottNagao replied.

He was taking part in a bullfighting festival at the Real Maestranza bullring in Seville, Andalusia when he wounded the bull that he was fighting.

Before killing the animal, Puebla wiped blood from its face.

It looked as though he was wiping a tear away from the poor creature's eye and the story hit the headlines.

Gervais shared his disgust at the incident on Twitter.

He called the matador a "dirty little psychopathic sequinned c*nt".

And the move certainly was perverse.

@MailOnline I would take a police charge and a jail sentence just to beat the living shit out of Morante de la Puebla.
— Nuovo Auto (@Nuovo Auto)1557769766.0

Although some have reportedly argued that Puebla was showing respect to the bull, the footage has outraged many.

Yesterday, Gervais posted this to his socials.

Many stand with Gervais on this one.

The light that he has shed on the evils of bullfighting has led to calls for bullfighting to be cancelled altogether. Here's hoping positive change comes of all this. Surely, if Ricky Gervais can outrage and frustrate so many, he can move them to action, too.