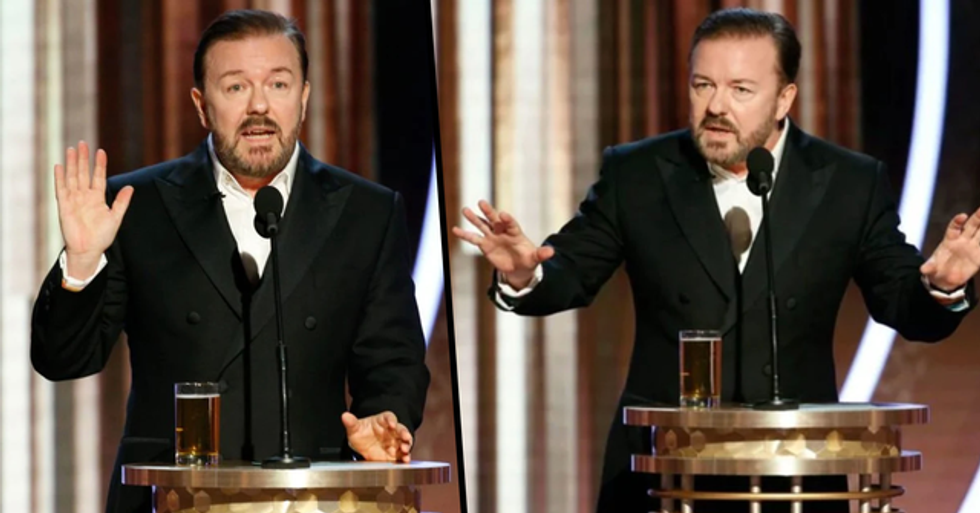 Sunday's Golden Globe awards saw the British reigned supreme yet again. Our favorite actors from across the pond swept up some major wins but the rest of the world managed to pull it back. Other than the award winners, there was another major talking point of the show: the Australian bushfires. The show became a platform to raise more awareness about the current climate crisis destroying thousands of acres of Australian land.

And with Ricky Gervais hosting the show for the final time, it became a night that will go down in history for all the wrong reasons. Why? Because he made sure the audience was... entertained the only way he knows how.

But there were some parts of his monologue that were just too risqué for broadcast. And now Gervais has revealed what he actually said in his censored jokes...

On Sunday, we saw the premiere of the 77th annual Golden Globes.

Pheobe Waller-Bridge's won her fair share of awards on Sunday. Fleabag was awarded 2 awards including Best TV series (comedy/musical) and Best Actress (comedy/musical). And well deserved, I must say.

Sundays' Golden Globes host Ricky Gervais took to the stage and gave us a night to remember.

And Gervais was only just getting warmed up at that point.

But some people didn't take too well to it...

Gervais immediately started receiving backlash for his "crude" humor, as people brandished him "right-wing" for his comments.

It only got worse as a huge Twitter debate broke out online.

There was abuse from both sides, validating their points about the comedian.

And even publications started writing their opinion pieces on if Gervais was actually right-wing or not...

It's safe to say, that his opening monologue wasn't received in the manner than he intended.

So, just to clear things up, Gervais addressed the situation on Instagram:

This is what he said: "How the f*** can teasing huge corporations, and the richest, most privileged people in the world be considered right wing? 😂 #GoldenGlobes."

Watch the full clip of his opening monologue so you can decide for yourself:

But many noticed that some parts of the monologue appear to have been censored. So what did Ricky Gervais say?

Dench is an absolute legend in the world of acting - so poking fun at her was a rather bold choice by Gervais.

But last year, Dench made a rather odd career choice.

She starred as Old Deuteronomy in the universally panned (and commercially disastrous) 2019 remake of Cats.

Dench stood up for her decision, calling it a role she was "born to play."

But Gervais had something to say on the matter. And it seems he knew it was going to get him in trouble, as he muttered beforehand, "I can't even do this next joke." He then went on to say Dench loves, "nothing better than plunking herself down on the carpet, lifting her leg and licking her own -"

Many suspected some sort of cat-related pun.

But Gervais took to Twitter to reveal what the censored word actually was.

Well, that's all cleared up then!

Thanks for all your amazing comments about my Golden Globes monologue. Best reaction ever and that means a lot to m… https://t.co/hLBQLfC1ih
— Ricky Gervais (@Ricky Gervais)1578332880.0

It seems Gervais wasn't prepared for the sheer amount of backlash he's received and is now looking forward to moving on to new projects. But if you want to see how offensive he can really be, keep on scrolling!