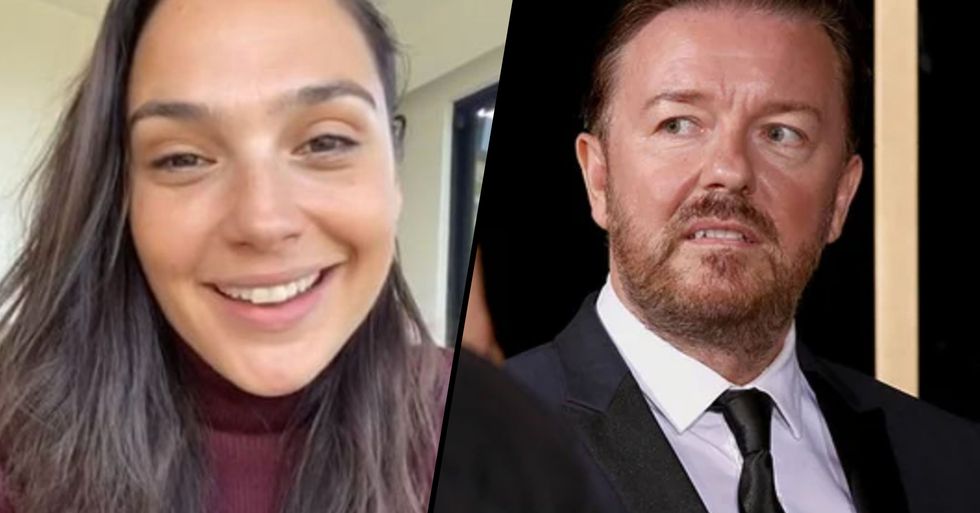 We all know Ricky Gervais isn't one for keeping his opinions to himself, in fact, he's outspoken on a range of topics, one of the main ones being how millionaires lecture us normal people on how to live our lives... And he's had enough.

In a recent interview, he's let it all out, including how he feels about the stars of Gal Gadot's Imagine video.

After you see the comments, you'll understand why everyone agrees.

The British actor and comedian has given us plenty of laughs over the years, primarily in the UK's The Office, in his stand-up shows, and in movies like The Invention of Lying.

But what Gervias does best is divide opinions.

"The two Gervaises — the angel and devil sitting on his own shoulders — uneasily swap custody of After Life [...] Here’s hoping their next collaboration turns out better," The New York Times wrote of his latest show, the hugely successful After Life.

Because, while most people find the comedian's jokes to be hilarious...

Others think quite the opposite. He's kind to animals but makes jokes that many consider to be "sexist," "racist." and often downright "cruel."

And now, Gervais has weighed in on the current behavior of celebrities...

Amid the ongoing medical pandemic, millions of us have been required to self-isolate at home...

Celebrities included. And, while some of these famous faces have been taking to their social media platforms to send encouraging messages and provide some much-needed entertainment for the rest of us...

Others have been venting their anguish and despair.

We all remember when singer, Sam Smith, shared in a post that his since been deleted, their stages of "quarantine meltdown" in his lavish North London home. Because, apparently, quarantining in a huge mansion can take a huge toll on someone's mental health. Cry us a river, Sam.

Oh, and we all cringed in horror when Ellen DeGeneres gave an insight into her quarantine.

The TV host compared her self-isolation to "being in jail." I don't know of any jails with twelve bedrooms, Ellen?

People have not been impressed with these rather pathetic complaints...

And Gervais was certainly one of them.

At the start, Gervais remained relatively quiet regarding the whole situation.

Oh, and he shared his quarantine liquor collection.

He posted a photo of his impressive booze cabinet, with the caption: "Keep y’ f*****’ bog roll...", in reference to the ridiculous stockpiling of toilet paper.

But now, he has given his opinion on "whining" celebrities like Sam...

And he certainly didn't hold back.

Gervais has come down like a ton of bricks on all the celebrities currently complaining about their lockdown.

"Then I see someone complaining about being in a mansion with a swimming pool. And, you know, honestly, I just don’t want to hear it."

And in true Ricky Gervais style, he didn't stop there...

His latest victims were the stars of Gal Gadot's Imagine video. While they're not whining about isolating in their luxury homes, Gervais thinks they're just as bad... And lots of people agree.

We all know that viral clip posted by the Wonder Woman star, in an attempt to lift spirits... Well, Gervais thinks they have ulterior motives. He's clearly tuned in to the people...

Ricky lay into the stars of the video during an interview on BBC Radio 5 Live, branding them "self-promoting" for taking part in the singalong. He said: "That Imagine video, it's not that bad, they're probably very nice people. It was an awful rendition, but they might have been doing it for good reasons, to help these normal nobodies."

He's always shedding light on the reality behind the glitz and glamour.

he said: "There are people in high rise blocks with three kids - I can't complain, this is why millionaires in their mansions with their gym and going for a swim can't lecture people. Check out his interview below...

He clearly has no time for millionaires lecturing us normal people on how to live our lives...

He continued: "They're going 'My film's coming up and I'm not on telly - I need to be in the public eye', not all of them but some of them. "You can see in their eye - 'I could cry at the beauty of my personality, I'm just so beautiful for doing this' and everyone sees that - we get it." Finally, someone's speaking some truth! If you want some more Ricky Gervais candor, keep scrolling to listen to his recent animal rights statement, that could be his biggest yet!