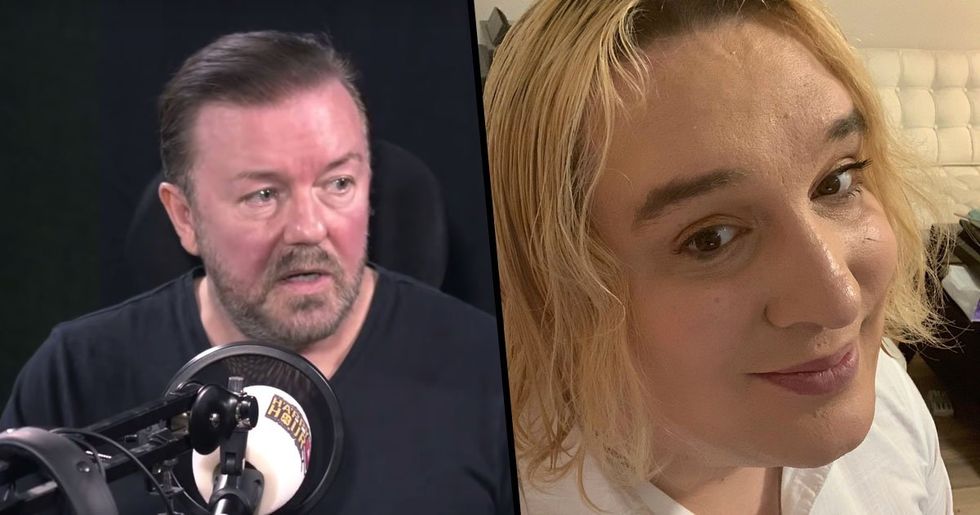 It seems that we will never live in an age in which there aren't issues surrounding the treatment of the LGBTQ+ community. It's a heartbreaking reality that many members of the community still suffer from hate and prejudice, and that the ignorant thoughts of individuals inflicting the hatred affect them daily.

But controversy isn't only caused by bigots and homophobes.

Recently, we all heard about a trans woman named Jessica Yaniv who caused a stir amongst the community when she announced that she was going to file complaints against other women who refused to wax her. The tables were quick to turn, and Yaniv quickly and, quite rightly so, lost her legal case.

And of course, the British comedian, Ricky Gervais has had his say on the matter, and he has not held back.

Originally born as Johnathan Yaniv, the Canadian trans activist now identifies as Jessica, and, ultimately, as a woman. Like many other women, Yaniv wanted to visit a salon to get a Brazilian wax.

Yaniv wanted access to the intimate services that were located in Vancouver but was ultimately refused as she still has male genitalia. Any female beautician who refused to handle her manhood is being "transphobic," according to Yaniv because they are "denying her womanhood."

Complaints were filed against more than a dozen female waxers...

This was done with the help of the Human Rights Council (HRC) in British Columbia. According to reports, Yaniv claimed that the women’s refusal to give her a Brazilian wax, to handle her manhood while removing hair, is discriminatory behavior.

Yaniv believes that she is entitled to these services as much as any other woman is.

She said that "self-identifying as a woman is sufficient to be treated as a woman and to get access to services typically reserved for women."

The hearing learned that Yaniv came across a waxing business via Facebook back in 2018.

Despite the LGBTQ+ community usually standing by one another...

People have been quick to turn against Yaniv, branding her a "psychopath" and even a "predator."

Many questioned Yaniv as to why she didn't use unisex waxing.

Because Yaniv still has a penis and testicles, people are wondering why she simply couldn't use a salon that provides services for both genders.

The fact that these women were potentially going to be prosecuted caused a stir...

@trustednerd I can't get my head round the idea that women practitioners should be forced to handle male genitalia… https://t.co/uJ43mdl8LX
— Sheila (@Sheila)1563530477.0

People were bringing up the issues of women's rights, and not just the rights of Yaniv, but of the women who have lost their jobs as a consequence of her actions.

But more truths about Yaniv started to emerge...

Screenshots from conversations with Yaniv via Facebook messenger emerged...

This user on Twitter has created an image that highlights all of the inappropriate comments that Yaniv has made towards young girls. She openly expressed that she wanted to share a cubicle with a young girl and "change pads" (sanitary products) together, and even help younger girls with their sanitary needs.

Yaniv helped to organize a youth "All Bodies" swim in her local area...

The swim was designed to welcome anyone from the LGBTQ+ community, and only allowed people aged between twelve and twenty-four-years-old. However, Yaniv outlined the rule that parents and/or caregivers are not allowed to attend for "privacy and safety," as well as putting in a rule that allows participants to attend topless if they please.

Obviously, Yaniv was branded a pedophile...

But she claimed to be standing up for human rights...

Yet it seems that all she has done is attempt to take advantage of young girls and abuse her power within the LGBTQ+ community. And, when she didn't get her own way, she filed lawsuits against potentially innocent women who were just trying to earn a living.

But karma works in wonderful ways...

It seems as if the tables have now turned and, instead of the other women being punished, Yaniv is the one with metal cuffs around her wrists.

Throughout all of this drama and controversy...

Yaniv's case to sue the original beauty salon and its workers who refused to wax her scrotum has officially been dismissed.

Her complaint was found not to be authentic.

The British Columbia Human Rights Tribunal said that Yaniv had "manufactured the conditions for a human rights complaint" when she had demanded a bikini wax despite still having a full set of male genitalia.

The salon specialized in the treatment of female genitalia only.

Because the salon had never waxed anyone’s scrotum, the tribunal said, it could not be said to be discriminating against Ms. Yaniv.

The workers of the salon were not trained to handle male genitalia.

The verdict from the tribunal read: "Human rights legislation does not require a service provider to wax a type of genitals they are not trained for and have not consented to wax."

The ruling said that Yaniv “targeted small businesses, manufactured the conditions for a human rights complaint, and then leveraged that complaint to pursue a financial settlement from parties who were unsophisticated and unlikely to mount a proper defense."

The evidence Yaniv herself gave was, according to the tribunal, “disingenuous and self-serving."

Jay Cameron, a lawyer for the Justice Centre for Constitutional Freedoms, said: "Self-identification does not erase physiological reality." "Our clients do not offer the service requested. No woman should be compelled to touch male genitals against her will, irrespective of how the owner of the genitals identifies."

Yaniv has ultimately been ordered to pay $2,000 to 3 of the women she complained about, one of whom was forced out of business as a result of the case.

And, never one to shy away from a little controversy...

British comedian and creator of The Office, Ricky Gervais, got well and truly involved by tweeting, in his usual blunt and sarcastic way, that it is a woman's right to not want to wax testicles.

Many agreed with the comedian's views...

These agreements were also put forward in a way that wasn't transphobic or abusive, as Yaniv tried to claim they were.

Because this is Ricky Gervais we're talking about, people. He's never one to hold back on a bit of controversy, is he?

The comedian made a rather timely Halloween joke...

I was going to dress up as something weird and creepy for my Halloween party, but I’m bucking the trend this year a… https://t.co/LbGyne3rOS
— Ricky Gervais (@Ricky Gervais)1572460252.0

And our friend Jessica was the butt of said joke. He shared a picture of Yaniv and wrote: "I was going to dress up as something weird and creepy for my Halloween party, but I’m bucking the trend this year and I’m going as brave female activist Jessica Yaniv. This also means I don’t have to wax my big old hairy balls."

Some people were offended...

Obviously, because people always are. Some Twitter users slammed Gervais for targetting Yaniv, and some even labeled him as transphobic.

But others were quick to defend the comedian's comments...

Noting that he wasn't being at all transphobic and that Yaniv is not a representative of the trans community, but simply a paedophilic predator.

And how did Ricky respond to all of this?

This tweet upset some people yesterday so I think I should apologise and delete it and never make offensive jokes l… https://t.co/1O6Xuaoeki
— Ricky Gervais (@Ricky Gervais)1572600295.0

After he received a barrage of negative feedback, the comedian sarcastically wrote, "This tweet upset some people yesterday so I think I should apologize and delete it and never make offensive jokes like this again." He then reshared the original post in an excellent use of irony. We love you, Ricky!