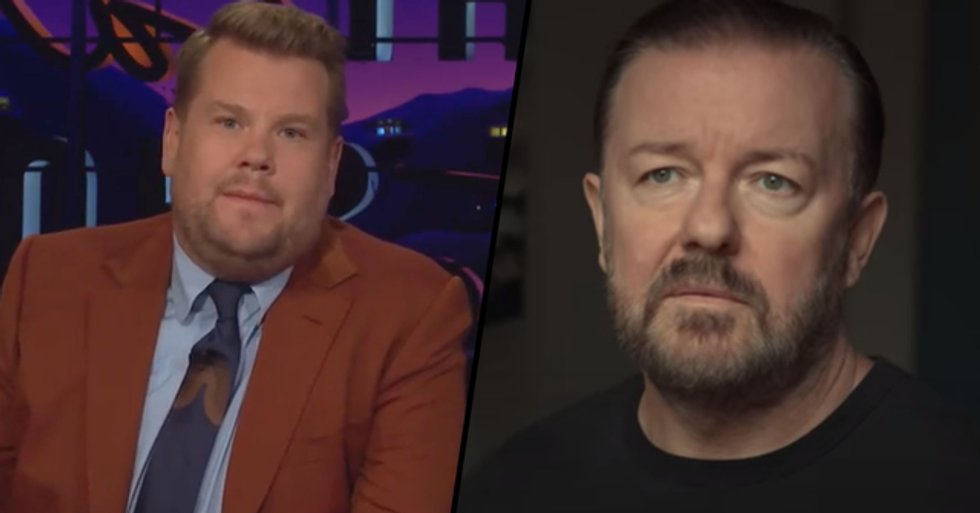 Ricky Gervais, who has never been one to hold back on his opinions of celebrities, has taken a subtle, yet savage swipe at James Corden in his latest Netflix show.

The British actor and comedian has given us plenty of laughs over the years, primarily in the UK's The Office, in his stand-up shows, and in movies such as The Invention of Lying.

But what Gervais does best is divide opinions.

Because, while most people find the comedian's jokes to be hilarious, others think quite the opposite. He's kind to animals but makes jokes that many consider to be "sexist," "racist." and often downright "cruel."

And, , of course, , Gervais has weighed in on the behavior of celebrities during the lockdown, too.

Gervais himself has remained relatively quiet regarding his own quarantine situation.

But he has come down like a ton of bricks on all the celebrities currently complaining about their lockdown.

"Then I see someone complaining about being in a mansion with a swimming pool. And, you know, honestly, I just don’t want to hear it." You tell them, Ricky!

And, to further ease people's quarantine woes, Gervais has released the second season of his much-loved show, After Life.

Afterlife is unbelievable. To go from laughing out loud to crying in the space of five minutes. Emotional rollercoaster
— Rhys Gant (@Rhys Gant)1588251623.0

The first season of the dark comedy was a roaring success, and the second is looking to be going the same way, with it receiving an overwhelmingly positive response in its first week.

But, Ricky being Ricky...

He just had to use his new show as a golden opportunity to take a swipe at one of his most disliked celebrities.

And it is James Corden who is Ricky's latest victim.

Now, the much-loved Corden has come under Ricky's fire a couple of times in the past, with the comedian slamming Corden’s attempt at emulating his hosting style at awards and making thinly veiled digs at his career choices, suggesting he's sold out by hosting a chat show.

Oh, and we all remember what he had to say about his Cats performance.

At the Golden Globes (obviously), Gervais casually said: "The world got to see James Corden as a fat pussy... He was also in Cats."  No, you're laughing.

But he wasn't finished there.

Now, fans are convinced that Ricky has taken another dig at Corden in the second series of After Life... Through the use of one of the characters.

In the show, a new character is introduced...

The character of James is somewhat lovable...

But he's mainly just an incredibly annoying mommy's boy, who is constantly seeking the praise and approval from his peers and colleagues.

Does it sound familiar to you?

The resemblence is a little uncanny.

And Twitter users have been having a lot of fun in pointing these similarities out to James himself.

After life series two even more of a masterpiece than the first series we’ll done @rickygervais you are a genius, a… https://t.co/lmTHXLALWi
— Bobby Tilbury (@Bobby Tilbury)1588167480.0

Obviously, James hasn't responded to any of them.

Savagery at it's finest.

Never change, Ricky. For more on whining celebrities, keep scrolling to hear why Ellen DeGeneres has come under fire recently...