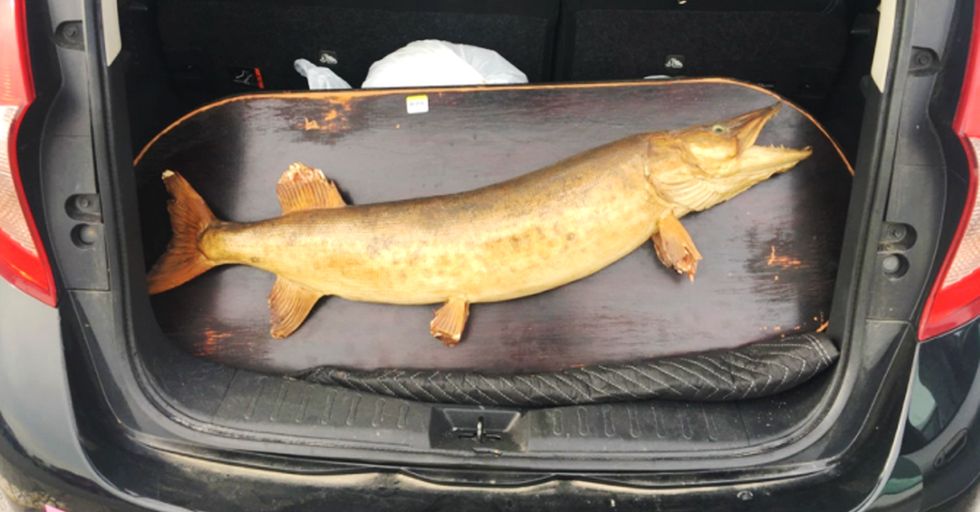 You never know what you're going to find when you hit up your neighborhood thrift shop.

One thing that's certain is that you're going to find something weird.

Macklemore isn't the only one who loves thrift shopping...

It's always a wild adventure at Goodwill. And these 19 pictures prove it.

Not only is this doll creepy and broken, but it's HUGE. This is the perfect thing to buy if you want to get inside it and scare all your friends.

This shirt from a time no more...

This is definitely a custom shirt made for one of the people in that couple. The fact that it's for sale at a thrift store seems to suggest they are not together anymore.

This piece of fine art

Ah yes. The wild Miller High Life can has been captured on film in its natural habitat. And framed. And sold for $3.99.

This wallet with a surprise inside

Oh man! A brand new beautiful wallet was a great thrift store find to begin with, but then there's a Bass Pro Shops gift card inside?! It's like this guy won the lottery! The next one is amazing...

This lizard holding a beer

Yes, this is a beer stein that looks like a lizard...holding a Budweiser. It doesn't get any more meta...or weirder than that.

This hat that's dirtier than it looks

Yes, this hat says, "Noodle, long and soft." What about it?

This ornament from your nightmares

Yes, that is a skiing baby demon with a pinecone for a torso. What else gets you in the mood for Christmas?

The only thing that's wrong with this shirt is that Bob Ross's heads are floating in space and not in a forest filled with happy little trees.

This fish you hang on your wall

Some people buy cartoonish singing basses that hang on your wall. Others buy what seems to be a real fish nailed to a wooden board. The next one is simply incredible...

This frame with a demon cat inside it

This Redditor wrote that they bought the frame at Goodwill and it came with this picture of what is clearly someone's cat in it. My theory is that it is a cat demon and if you try to take the picture out of the frame you will experience bad luck for the rest of your days.

This reimagining of a Pixar classic

Apparently, this keychain was found in a thrift store in Taiwan and I just have to say, "Yes. Yes, yes, a million times yes."

What?! It is his birthday, after all. That red balloon super remind's me of Stephen King's It, though, and now this sweater has taken on a whole new meaning.

The Redditor who posted this wrote that the thrift store labeled these as "unusual old chocolate molds." I'll say!

This is...a lot. I don't know what to say about it except, "No thank you." The next one is hilariously weird...

These boots that were not made for walking

These insane sparkly shoes were found at a flea market in Mexico. What is their purpose? Why? And how does one walk in them? So many questions...

This penguin mug where something dirty's going on

Is it blue and black or white and gold? The eternal question... With this hilarious costume dress, the answer is BOTH.

That's right. Goodwill was trying to sell this rock. For one dollar. This is not a joke.

Finally, you can wipe yourself with the face of this guy. However, we never recommend buying loose rolls of toilet paper at the thrift store. You don't know where that's been. Share this with the thrifter in your life!