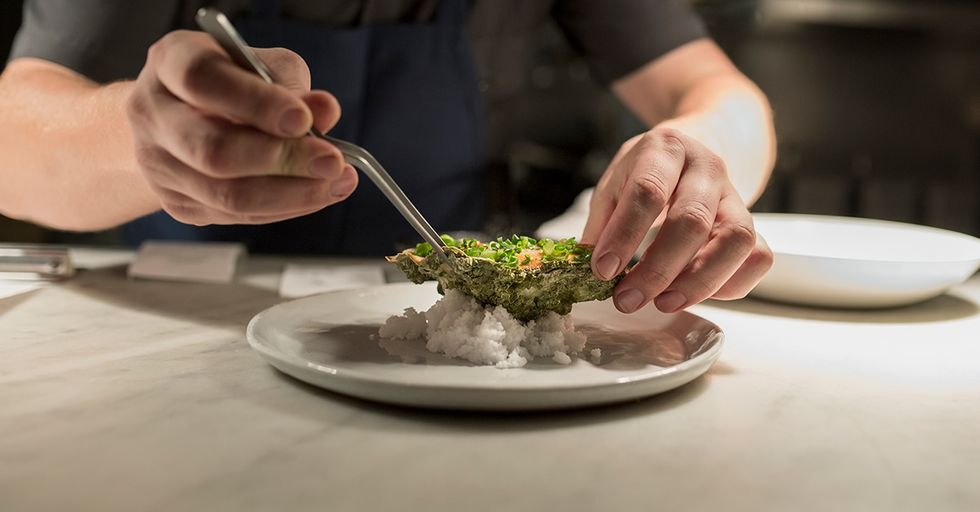 30 Restaurants That Went Way Too Far Presenting Their Dishes

We've all been to so-called "fancy" restaurants where the chef serves food on a plank or a stone because they spent too much time on Instagram while planning their menu. Hell, even my mom has started serving her cheeses on a small chalkboard. It's too much, mom.

We've compiled 30 of the most insane ways restaurants have plated their dishes all in the pursuit of "gourmet." The problem is, none of this stuff is actually gourmet, and Gordon Ramsay probably wouldn't be seen 100 yards from any of these places.

So sit back, and thank yourself and your wallet for not spending hundreds of dollars on these ridiculous dishes that probably don't even taste that good to begin with.

"Cool, lets put your burger and fries inside of a weird fishtank"

"And let's be sure to put the fries at the bottom of the steamy bowl so they get all nice and soggy." Great, thanks. This is how I wanted my food served.

Did you...find that on the side of the road?

Please don't serve my bread inside of a squirrel ever again. I don't care if squirrels have some kind of incredible insulating properties we've never heard about -- the bread's not even toasted.

This is a cocktail. There's liquid in that rock.

I hope you brought a bib because you can bet I'm going to spill 90% of that $45 cocktail down the front of my shirt.

"Oh sorry, you forgot to put your napkin on your lap? Too bad."

We're going to give you finger foods, but you're not going to be able to use your napkin. Because we hate you. Good luck on your date though!

This restaurant brought our their check on a typewriter.

Am I supposed to sign my name with this thing? Also, how many 45-pound typewriters does this place have lying around?

This is a mess.

Gordon Ramsay would be furious. And is that a SHOT of olive oil? Who wants that?

This is a bone. This dinner is served on a bone.

At least it looks clean, but still. I'm pretty sure cave-people didn't even eat food off of bones.

Psych. It's a picture of a plate on an iPad. Because if two things go together perfectly, it's iPads and cutlery.

On a clothesline. Just like Chef Boyardee used to do.

"Sir, can I please see your right wrist?"

Pizza served on a snowboard.

Because it's so easy to pass a giant snowboard around the table.

Steve Jobs is rolling over in his grave. Notice the aux cords coming out of the iPads like they're about to play some kind of horrible food symphony.

"Watch your fries drift away because your friends want some fried zucchini."

Welcome to the 1964 food World's Fair, where all food must be served on this ridiculous Ferris wheel.

This is butter. Served on a rock.

"Let's just overcook the eggs and serve them straight from the pan."

It's called homestyle and it's chic.

This would almost be interesting if it didn't look like such a pain in the ass to eat.

I don't even want to know who thought this was a good idea.

This poor mouse died in its pursuit of cheese, and we don't even have the decency to remove it before we dig in. RIP Mr. Mouse.

"The same tiles were in the bathroom."

Oh nice, my dinner is being served on leftover bathroom tiles. Because nothing says elegant like the floor of a restaurant bathroom.

Is that pillow levitating?

Yes, yes it is. Which is honestly pretty cool, but also so impractical. I just want my dessert. If I wanted a magic trick I'd go to my Uncle Henry's sad apartment.

Are we supposed to undress them? Excuse me, waiter, I'm actually uncomfortable. The sauce around the one on the right makes it look like she's about to perform some kind of seance ritual for Lady Gaga.

This is a plate -- upside-down.

"Because we're turning traditional cuisine on its head" or probably something dumb like that.

That's a urinal and I will accept no other answers. And honestly, whatever food is in that urinal kinda looks like someone took a #2. I quit.

Nothing quite says "I need a new family" quite like this:

"Yeah just throw that spaghetti anywhere. We'll figure it out from here." At least this family was pretty smart to set up a food-wall made out of napkins to avoid any kind of lap spillage. Maybe if they had a couple plates they wouldn't have to...

This cocktail is served under an umbrella.

I'm sure that's not going to tip and spill everywhere. Umbrellas are designed to sit perfectly flat upside-down. Everyone knows that.

I always see food on Instagram that looks really cool, and then I wonder, "how on earth is someone ever supposed to eat that?" I still don't have an answer.

Fill that can on sugar with something a little more healthy!

Just be careful not to get any metal shards in your mouth while you eat this tiny salad!

Honestly, this looks like something I would come up with in a dream and think is a brilliant idea. But it's not. It's stupid and I'm embarrassed.

This is on another level.

Why....why are there eggs? That's the most disturbing part.

Can you imagine trying to carry that to someone's table? At least it has a handle.