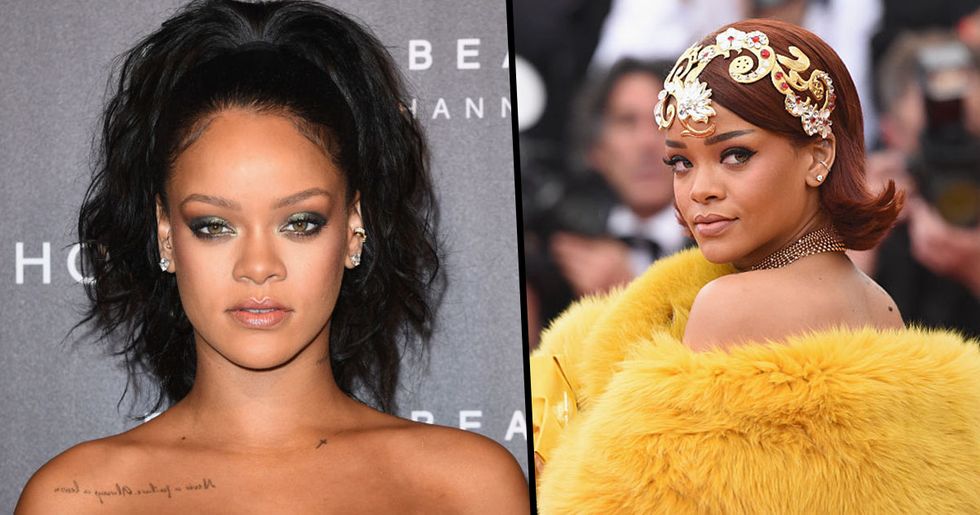 Nowadays, celebrities literally can't do anything without people pointing a finger at them, telling them that they've done something wrong. It seems that we're living in a generation of the "easily offended," where even a sneeze will guarantee to cause offense to someone in the world.

Cultural appropriation is a social issue that has been circulating throughout the showbiz world, with countless celebrities causing offense in regards to imitating cultures that aren't their own.

Singer and mega-babe, Rihanna, is the most recent celebrity to be accused of cultural appropriation, and it has certainly drawn a range of mixed reactions.

Keep scrolling to find out if you think that Bad Gal RiRi is really in the wrong here...

There's no denying that Rihanna is the ultimate style icon...

Other than her music, Rihanna is well known for the incredibly fierce looks that she serves on a daily basis.

Is there anything that RiRi can't pull off?

Clearly not! The Barbados-born babe has a no-nonsense attitude that the world just loves, and the looks that she posts on her Instagram are to die for...

The singer is no stranger to the world of fashion and beauty...

Rihanna's venture into the world of cosmetics saw the birth of Fenty Beauty, which was originally launched in 2017. It includes a range of stunning products including her popular foundation range - which, by the way, was the first cosmetics brand to include a range of shades as wide as forty! She has also released a lingerie line named Savage x Fenty.

It's safe to say that Rihanna is pretty damn successful.

Alongside her music career and her business ventures, Rihanna is known for her involvement in humanitarian causes. She is the founder of the non-profit organization, the Clara Lionel Foundation, which focuses on benefiting impoverished communities around the world with healthcare and education.

However, Rhianna has dealt with her fair share of criticism...

Rihanna fell victim to critics in 2017 for her appearance on the cover of an issue of Vogue Paris. Readers accused the singer and her photographer, Juergen Teller, of copying elements of artist, Mickalene Thomas', work in her representations of black women.

Thomas' work has been praised worldwide for her positive representation of black women.

And, obviously, critics noticed the striking similarities in Rihanna's Vogue shoot. An admirer of Thomas' work wrote an article claiming that Rhianna's cover "is very similar to Mickalene Thomas’ work and Juergen needs to explain what’s going on."

Many believed that it was an example of cultural appropriation.

According to Artnet News, Thomas' New York gallery issued a statement in regards to the German photographer's images and how they had been "rightly compared" to her work. The statement suggested that Thomas, who is forty-seven-years-old, had fallen victim to "cultural appropriation," which sees white artists use the work of ethnic minority artists without crediting their central role in its creation.

It looks like Rihanna is no stranger to causing a stir...

And her most recent magazine appearance has caused similar controversy.

She is the face of the August 2019 edition of Harper's Bazaar China.

On Tuesday, RiRi shared a preview on her Instagram of the edition which features some pretty extravagant oriental-themed photographs of the singer. The shots were taken by ChenMan, a visual artist and photographer. Her hair seems to emulate Chinese styles and her makeup is delicately applied in a more traditional way to mimic the style of Chinese geishas.

Every detail of the shoot has been placed in an attempt to reference Chinese and East Asian culture...

This includes everything from Rihanna's Asian-themed wardrobe to her lotus flower manicure and the delicate oriental scenery of the shoot. The fashion icon is wearing a silk kimono and vibrant gowns whilst posing with props such as a traditional Chinese fan and even a Shih-Tzu dog in order to create an East Asian aesthetic for the August edition.

Harper's Bazaar China has promoted the shoot via Instagram.

They wrote that having Rihanna as their cover star shows how a "western-style icon meets an eastern aesthetic," and that she "doesn't care about judgments from others, she just keeps doing what she loves."

Even despite Harper's Bazaar sharing its intentions, people aren't happy.

Social media users have voiced their disagreements with this particular edition, accusing both the Chinese publication and Rihanna of cultural appropriation.

"Nobody cares because its Rihanna..."

Users took to Twitter to express their disbelief over the shoot, with one of them saying that, because it's Rihanna, "people don't care." The fact that the shoot is based on fashion has also been critiqued, with people suggesting that fashion is not an excuse to appropriate other cultures just because it looks "trendy."

Many believe that Rihanna is being treated as an exception.

Some people are confused as to why Rihanna is an exception to cultural appropriation just because of her fame and success. I don't think that it provides an excuse for this kind of behavior, but the reasons behind the accusations are based on unstable foundations.

Many have been quick to defend the superstar, however...

@MariahajilE It’s not cultural appropriation because the entire team behind Harper’s Bazaar China is Chinese and it… https://t.co/dwgZFEwQfM
— 𝘿𝙪𝙧𝙖𝙯𝙣𝙤 (@𝘿𝙪𝙧𝙖𝙯𝙣𝙤)1562684210.0

Some users have taken to social media to remind others that the photoshoot was backed and designed by a Chinese team, and was indeed for Harper's Bazaar China. So, shouldn't it involve elements of the Chinese culture?

Many have even involved the Kardashians in the argument... because, why not?

Somehow, the Kardashians are now involved. Many on Twitter have compared this issue to the controversy that recently surrounded Kim Kardashian's new shapewear line, in which she named a garment a "kimono."

The garment was considered to be "offensive."

@KimKardashian Nice underwear, but as a Japanese woman who loves to wear our traditional dress,👘 kimono, I find the… https://t.co/QvoOAmQSD2
— Yuko Kato (@Yuko Kato)1561507206.0

Japanese news editor, Yuko Kato, voiced her opinions on Twitter, stating that the Kardashian clothing line was "baffling." The underwear line had literally no resemblance to a traditional Japanese kimono. She also stated that she found the naming of the product "culturally offensive."

Kim was quick to remove the "kimono" trademark.

Kim hasn't yet chosen a new name for the clothing line, but she has seen a vast amount of backlash in regards to the original, and rather tactless, name.

It seems that fashion and culture are a duo not to be combined...

The controversy surrounding models and famous folk embracing or referencing cultures that aren't their own is definitely a stigma in 2019. That's mainly because most people understand what cultural appropriation entails. However, many see this as a type of art, a mark of appreciation, and a way to be creative and express love for cultures that may not be their own.

Despite the backlash, RiRi still appears to have her dedicated worldwide following.

And even though many believe that her recent photoshoot is risky and controversial, I must say... she is absolutely killing it. I personally believe that everybody should be allowed to embrace and celebrate the cultures of others, especially the ones of that we aren't familiar with; it's a beautiful thing to learn about and, most importantly, it shows our acceptance towards others.