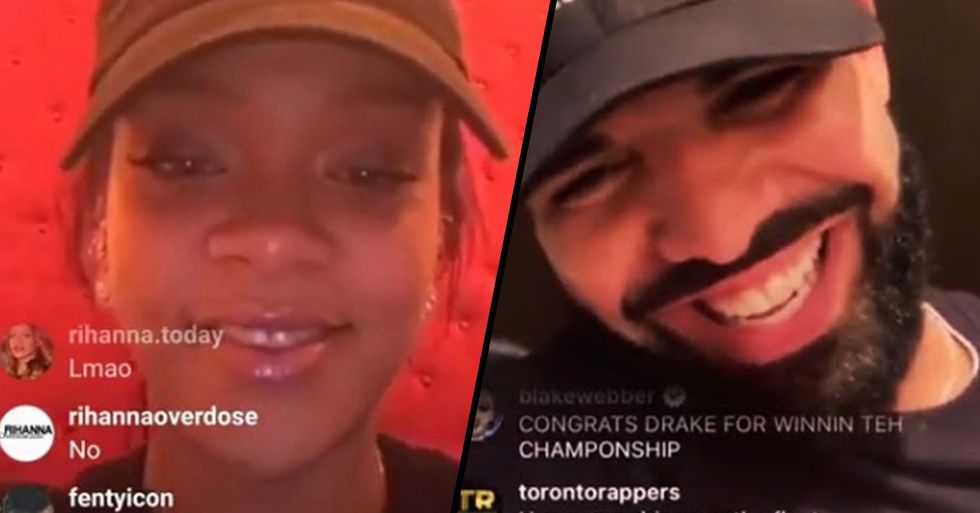 Rihanna has spectacularly shut down her old flame, Drake, on an Instagram Live video, and she certainly didn't hold back...

His first mixtape titled, Room for Improvement, put him well and truly on the map.

3 years after his initial release, he started promoting his third mixtape, So Far Gone, which saw him gain a tremendous amount of commercial success.

The album had fourteen songs and featured a whole host of famous faces.

And in the next few years, Drake's success continued to grow.

Over the next decade, Drake established his legacy in the music industry by releasing banger after banger, with most of them ending up in the top ten on every single chart.

But his success isn't exclusive to the music industry.

A lot of people forget that Drake actually started out as an actor, and did several commercials before securing a permanent role.

Long story short, Drake has secured an illustrious career in both industries.

His music is beloved by millions all over the world, and fans have long admired his ability to discuss raw and sensitive topics, from the child he tried to keep a secret all the way to his faith in God.

However, there's something a little less favorable about the rapper that has been landing him in hot water in recent years.

Drake's love life has always made headlines but, recently, many have been criticizing him for his approach to young women.

Drake has become known for his habit of sliding into various women's DMs...

You can't blame a guy for trying, right?

But, sometimes, the age of the girls he texts is a little questionable.

It was revealed last year that the rapper had been texting the then fourteen-year-old Stranger Things star, Millie Bobby Brown.

On the Emmy red carpet last year, Millie told Access Hollywood about her and Drake’s friendship. “He's honestly so fantastic. A great friend and a great role model,“ she said, excitedly. "We just texted each other the other day and he was like 'I miss you so much,' and I was like 'I miss you more.'"

But it was admittedly a little wierd.

When asked to elaborate on what they text about, Millie replied: “About boys, he helps me." A thirty-two-year-old giving a teenager advice on boys? Yeah, reel it back in, Drake.

And his antics didn't stop there.

The rapper came under fire again when a seventeen-year-old Billie Eilish admitted that, though they had never met in person, the pair exchange text messages.

In an interview with Vanity Fair last year about her relationship with thirty-three-year-old Drake, Billie said, “I’ve only like texted him, but he’s so nice. Like, he does not need to be nice, you know what I mean? He’s at a level in his life where he doesn’t need to be nice, but he is, you know?"

But he's innocent until proven guilty.

Drake has never addressed his relationships with these young girls, and people involved have persistently stressed that there is nothing inappropriate going on.

And his past relationships have been nothing out of the ordinary.

Drake has dated many women over the years, with rumors including Jennifer Lopez, Hailey Beiber, and Lateysha Grace.

But his most high profile relationship was with pop sensation, Rhianna.

Drake famously started dating Rihanna in 2009, and the pair went on to have an on-off relationship for years.

Drake and Rihanna became one of the most famous couples of the decade.

And they toyed with fans’ emotions for many years, constantly sparking speculation as to what the status of the pair’s mysterious relationship or friendship actually was.

And we all remember the time Drake publically declared his love for the singer back in 2016.

The rapper professed his love for Rihanna on stage at the 2016 VMAs... However, this very public display of affection evidently didn't swing with RiRi, and the pair split up later that year.

There are no hard feelings between the couple, and they have evidently continued their friendship.

And RiRi is clearly not afraid to enjoy a little bit of flirting with her old flame.

In a recent Instagram Live hosted by DJ Spade, Rhianna hilariously roasted her ex in the comments section for the whole world to see.

It all started when Drake dropped a cheeky comment...

And, when the rapper continued to drop comments, Rhianna spectacularly shut him down.

She shot back with: "Give drake some water".

People were loving her comment in the Instagram Live feed, and Drake flirtatiously replied: "yo u [sic] have a bad attitude @badgalriri."

The pair sent a series of different messages to each other...

And Drake went on to roast Rihanna right back by equipping, "Rihanna drop R12 right now." Yeah, I'm with Drake on this one...

Obviously, their interaction sent the internet into meltdown.

But others were worried...

Does their public flirting mean they're going to get back together? Rihanna... Don't do it!

But it seems that the pop star has another man on her horizons...