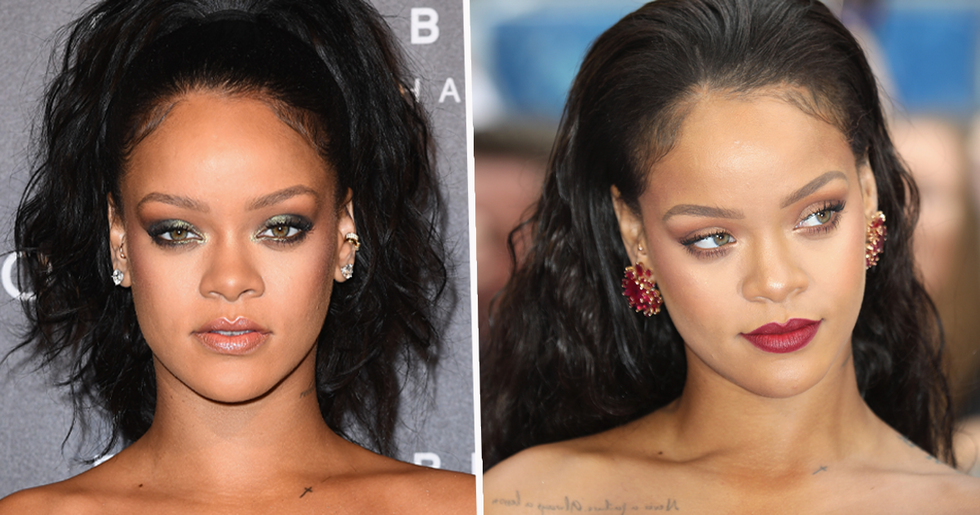 From her beauty and fashion brands to her stellar music career, Rihanna is one of the most loved and successful women of our time.

However, she has recently found herself in the hot seat after she used an "offensive" song at her Savage x Fenty show. This rookie mistake has outraged millions, and this isn't the first time she's done something like this...

Rihanna could do no wrong...

The singer has recently found herself on the receiving end of backlash after she made some pretty disastrous mistakes.

And they all happened during the Savage x Fenty lingerie show that took place on October 2nd.

And now people are calling her out for other mistakes she supposedly got away with.

Wait until you see all the evidence... Including her response to it all. It's a rollercoaster ride, that's for sure.

Rihanna is everyone's favorite idol... Or at least she used to be.

Her career only got more successful with the release of one of her most popular albums, Good Girl Gone Bad.

Her venture into the beauty industry led her to a fortune of 3 billion dollars.

"Beauty for All". Because the industry was becoming more and more diverse, the artist wanted to make sure that she was also moving with the trend. Her first line of foundations included a whopping forty different shades to suit all skin tones. She even went as far as thinking about the undertones of each one.

With the recent addition of new shades, the company is absolutely killing the make-up game.

That's why she's one of the richest musicians in the world right now.

At the rate she's going, there's nothing that can stop her from cashing out that check... Unless she has a dramatic fall in profits and after the mistake she made last week, it looks like it could happen very soon.

She decided that she was going to use a song that remixed a sacred Islamic hadith so that models in lingerie could strut their stuff down the catwalk to it.

Now I know what you're thinking: What in the hell is a Hadith?

Hadiths are the teachings and sayings of Prophet Muhammad, who is a prominent religious figure in Islam. They give Muslims advice on how to live their lives in the best possible way, especially if hardships befall them.

The Hadiths are the second most important scriptures after their holy book, the Quran.

So when the news that Rihanna had given the go-ahead for the verses to be remixed into a warped dance track came about, of course, millions of Muslims and also a lot of non-Muslims were left appalled.

not gonna mention the double standard in this app. for an example when Lana doesn't wear a mask, y'all cancel her b… https://t.co/DATZEjZLrA
— danial (@danial)1601882138.0

And just to make things worse, this is the second time she's used the "offensive" track.

The song, produced by London-based artist, Coucou Chloe, has been heavily criticized for using the sections of the Hadith in the first place.

The artist posted this apology claiming she didn't know what the Hadith meant:

I want to deeply apologize for the offence caused by the vocal samples used in my song ‘DOOM'. The song was created… https://t.co/ceVTRps8Rr
— COUCOU CHLOE (@COUCOU CHLOE)1601911338.0

She wrote this: "I want to deeply apologize for the offence caused by the vocal samples used in my song ‘DOOM'. The song was created using samples from Baile Funk tracks I found online. At the time, I was not aware that these samples used text from an Islamic Hadith."

I take full responsibility for the fact I did not research these words properly and want to thank those of you who… https://t.co/sKS28LkYtM
— COUCOU CHLOE (@COUCOU CHLOE)1601911385.0

So is it just a random coincidence that the song, which used the Hadith discussing "Doomsday" is called "Doom?"

For a woman that preaches about inclusivity and that uses Muslims, especially hijabis, as part of her campaign, this was a bad move.

Rihanna has, in the past, been called out for other offensive things she has done towards the Muslim faith, including the time where she wore a disrespectful outfit and posed for pictures outside a holy mosque landmark in Abu Dhabi.

Apparently, it was so bad that she was asked to leave the premises.

I mean, it's not that difficult. No matter what the religion is, if you're visiting any of their holy sites, or using them to boost your campaign to help win over another audience, then educate yourself on the matter. You can't just approve something without understanding it. Islam not just an aesthetic.

And it seems as though Rihanna has understood this given the backlash.

Someone had messaged her Instagram account asking her what was going on with all the drama surrounding her show, and she replied, addressing the terrible choice in music.

Other people that have spoken to the singer have said she will be addressing the issue publicly very soon.

And even Savage x Fenty has been replying to comments on their Instagram photos with apologies.

The clip is currently being edited to cover the music in the videos of the show.

You're an artist and an idol. You must take the time to practice what you preach. In related news, check out why Terry Crews has been under fire recently...