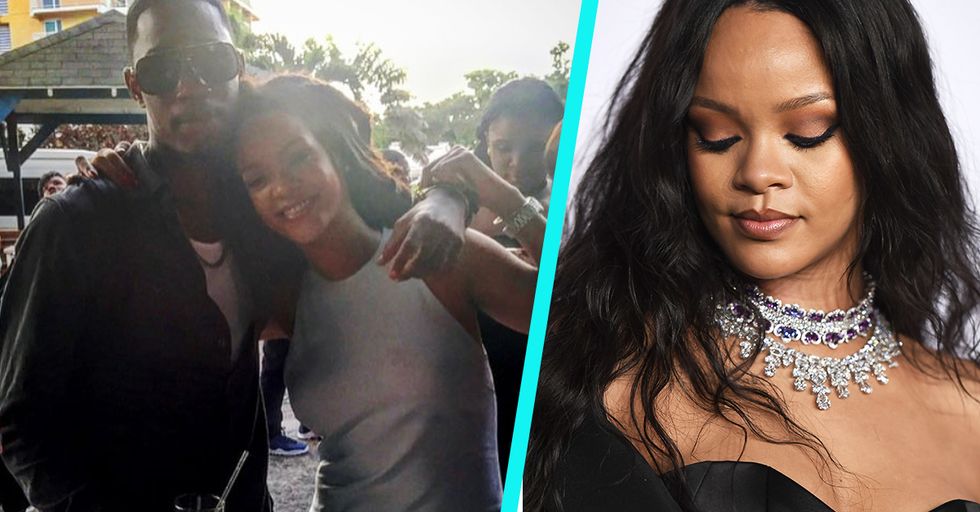 In 2017, the line between politics and entertainment became more blurred than ever before. For starters, a reality TV star is the president (and another reality TV star was — until quite recently — working as a White House correspondent). Countless celebrities have shared their own views on the current political climate, and in some cases they've even stepped in to help when they didn't feel politicians were doing enough (see: Pitbull and Lin-Manuel Miranda helping with hurricane relief, Amal and George Clooney taking in a refugee, and Guy Fieri making food for people displaced by wildfires).

In today's story, superstar Rihanna is once again sharing her political views. Unfortunately, there's a tragic reason for her posts.

Rihanna has never been one to shy away from the spotlight.

It seems like we've seen her everywhere this year. Whether she was slamming body-shamers or promoting her makeup line (one of the most inclusive collections ever), Rihanna has always been bold and unashamed to speak out.

But Rihanna hasn't been afraid to share her political opinions, either.

In the months leading up to the 2016 presidential election, Rihanna stepped out wearing a shirt with Hillary Clinton's picture on it. As a citizen of Barbados, Rihanna wasn't able to vote in the U.S. election, but that didn't keep her from sharing her support for Clinton.

Rihanna then doubled down on Election Day by wearing this Inception-style shirt:

It's a shirt with a picture of her wearing the first Hillary Clinton shirt. Yep, there was absolutely no mistaking where Rihanna stood in our most recent presidential election.

After Trump was elected, Rihanna continued to speak out against many of his policies.

Disgusted! The news is devastating! America is being ruined right before our eyes! What an immoral pig you have to be to implement such BS!!
— Rihanna (@Rihanna)1485654466.0

She shared the above tweet when Trump instituted his controversial travel ban back in January. Clearly, she was just as disgusted with the executive order as we were.

After Hurricane Irma and Hurricane Maria devastated the U.S. territory of Puerto Rico, Rihanna once again took to Twitter to slam Trump:

Interestingly enough, the president gave himself a "10 out of 10" score for his response to the hurricanes (because of course he did). But Rihanna set the record straight and called him out for letting people die on his watch. On Tuesday, December 26, Rihanna spoke out once again on a political issue. Unfortunately, she did so under very tragic circumstances...

Rihanna's post was about her 21-year-old cousin, Tavon Kaiseen Alleyne.

Barbados Today reports that around 7 pm, Alleyne was in the Barbadian parish of St. Michael when he was approached by an unidentified man.

Alleyne was then transported by private car to the Queen Elizabeth Hospital. But unfortunately, he passed away later that night.

Rihanna shared a post on Instagram mourning the loss of her cousin and calling for an end to gun violence.

"RIP cousin... can't believe it was just last night that I held you in my arms!" she wrote. "[N]ever thought that would be the last time I felt the warmth in your body!!! Love you always man!" Rihanna closed the post with the hashtag #endgunviolence.

The Caribbean island country of Barbados has seen a significant rise in gun violence over the past year.

Back in April, Attorney General and Minister of Home Affairs Adriel Brathwaite told residents that he was very concerned about the rise in gun violence, but reassured them that multiple measures had been taken to address the issue. Rihanna's post has been flooded with support and replies from her followers. It remains to be seen whether or not Alleyne's death will bring about any change in Barbadian gun control laws.