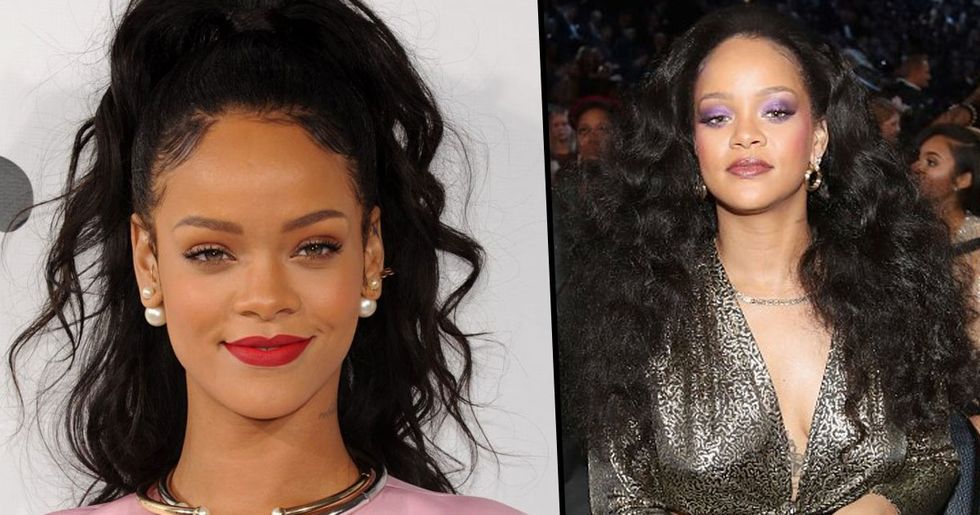 We all love a good internet squabble. Arguing with strangers over the most random of topics... What's not to like?

When we're not disagreeing over the color of a dress (still having nightmares over that one...), or bickering over what the nation's favorite cookie is, celebrities are usually the general topic of our heated debates.

Today's argument concerns our favourite pop star, Rihanna, who has caused online mayhem with one short video. Nope, she hasn't made any outrageous claims or worn any more risque outfits, she simply said her own name.

And it sent Twitter into complete melt-down, because, apparently, we've been pronouncing her name wrong this entire time. What is wrong with us?!

Keep scrolling for the full tea. Warning: it's hot.

Rihanna is one of our favorite celebrities.

Since rising to fame in 2007, Rihanna has been one of the most famous musicians of our time.

Born and raised in Barbados, Rihanna made the big move to the U.S. in the hopes of pursuing her music career.

Her Caribbean/Dance-Pop style of music instantly shot her to fame.

Rihanna's unusual music style sent her straight to the top of the billboards, with her third studio album, Good Girl Gone Bad, catapulting her to even higher stardom.

She is now one of the best-selling artists of all time.

And she isn't only the queen of the music world...

She's also an accomplished business-woman. In 2017, Rihanna launched her own beauty brand, Fenty Beauty, which has grown to become one of the best-known makeup brands in the world.

Rihanna is all for equality and made history with her ground-breaking selection of forty different foundation shades.

This move shook up the beauty world...

The makeup industry has long been criticized for not catering to enough ethnic groups. After Fenty's shade release, several other brands quickly followed suit by adding extra skin tones to their foundation selections.

And we can't forget the time that Fenty paid for a customer's stolen products.

When a customer tweeted about her stolen products, Fenty hastily responded in classic Rihanna style.

Rihanna tackles the big issues, too.

In 2018, Rihanna met with French President, Emmanuel Macron, to discuss funding for education in impoverished countries. As well as changing the beauty world, she's changing the rest of the world, too.

And there was the time that she became an online therapist...

When a fan sent her a DM asking for advice on a breakup, RiRi responded with a heartfelt message reassuring him that things will get better. Is someone cutting onions over here?

And we just can't forget the time that she stole the show at Fashion Week...

Only Rihanna could close her fashion show by literally flying across the stage on a motorbike. She certainly knows how to make an entrance.

To put it briefly, Rihanna is a legend.

As a nation, we can't get enough of Rihanna. Even when she's been correcting something we've (embrassingly) been doing wrong for years.

So, let's start this story from the beginning.

Rihanna recently filmed a quick video for British Vogue. In the video, which is filmed at the launch of her new Fenty Beauty collection, she simply introduces herself and welcomes her fans to the launch.

This is where the controversy begins.

The way she pronounced her name pricked a few ears on this side of the pond. Rihanna's pronunciation has brought the realization that we might have been saying her name wrong all these years. Oops.

Most of us in America tend to pronounce it as REE-AH-NAH.

It doesn't seem too difficult, does it? Well, how wrong we were. RiRi pronounced her own name differently, and she did it with more similarity to the British pronunciation.

@boopyape us brits we BEEN pronouncing her name right since dayyy
— timothy 🇬🇭🇹🇷 (@timothy 🇬🇭🇹🇷)1559170930.0

And the Brits are getting very smug, obviously.

There was even a poll.

Someone actually created a poll to see which pronunciation was correct, and the results were almost too close to call. It seems that Twitter is fully divided over this topic. Someone's got to be wrong, though...

Or maybe we should just ask Rihanna herself...

After all, she probably knows better than anyone how her own name is pronounced. So, you can all stop bickering and watch the video above.

But she has told us in the past!

We never listen, do we? Rihanna has actually discussed the pronunciation of her name before in an interview with AJ Hammer. Watch and learn here...

We hope that's cleared a few things up.

We think that Rihanna has stressed the pronunciation enough times for us to know how to say it now, don't you? Not that it will affect her massively. Rihanna has always oozed confidence and consistently does her own thing without caring what people think, and that's why we love her. She recently opened up in an amazingly candid interview about her body. Read it below.