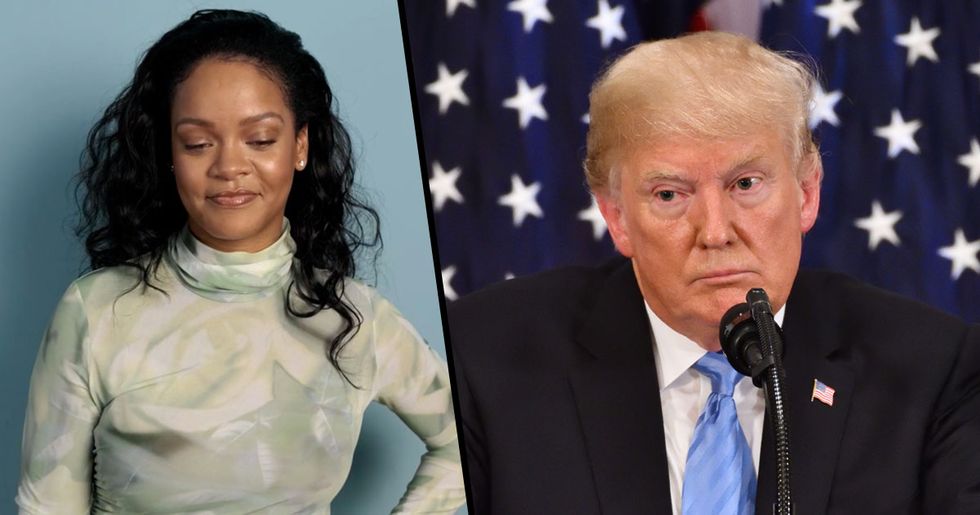 I mean, if Rihanna said it... No, seriously though, in a recent interview with Vogue, the "Umbrella" hitmaker made some very coherent points about the president.

Although Trump is facing an impeachment inquiry, it's unlikely that he will actually be removed from the oval office. Despite growing concerns about his irrational behavior and concerning political moves, it seems like impeaching a president is no easy task. Frankly, I don't think there's anything that anyone can do to stop this high-speed Trump-train from driving us all into financial and social ruin. Unless, you know, we voted in someone who isn't mentally unhinged. Heck, I'd sooner have Rihanna calling the shots.

And, you know, after hearing about what she said on the state of American politics, you might even agree with me.

"How deep you wanna get?"

When asked in her November Vogue cover issue, if politics could be discussed, Rihanna was more than happy to talk shop.

Rihanna doesn't shy away from saying what she thinks.

The Barbadian singer, actress, fashion designer, and businesswoman has lived in the U.S. since 2005. Rihanna originally moved over to the States when she signed her first record deal with Def Jam Recordings. She was seventeen years old.

Now thirty-three-years-old, Rihanna has almost lived in America for as long as she lived in her birthplace of Barbados. The singer has witnessed a lot of changes in the U.S. during this time and the presidency of Donald Trump has certainly not been one of the most favourable changes. She is now basing herself in London, something that doesn't keep her from dismissing American politics...

“I don’t feel outside the fray."

Wherever Rihanna is in the world, she insists: "When I see something happen to any woman, a woman of any minority, kids, black men being murdered in the streets - I can’t remove myself from that." Rihanna considers herself a global citizen, and wherever human rights are being violated, she is going to speak up.

Since Trump's presidency, Rihanna has become more outspoken in her politics.

Speaking directly to her American fanbase on social media sites like Instagram and Twitter, the singer has spoken about how important it is to engage with politics in this day and age.

Rihanna turned down the Super Bowl half-time show to stand in solidarity with Colin Kaepernick.

Donald Trump may have intervened on Colin Kaepernick signing with a team. Smh, why am i not suprised.
— Leader Johnson (@Leader Johnson)1569859904.0

Trump was rumored to be involved in preventing NFL quarterback, Kaepernick, from getting signed after he had stood up against the unfair treatment of black people in the sport and in the country as a whole.

During the NFL season in 2016, Kaepernick caused controversy by kneeling during the National Anthem. The quarterback was protesting against racial oppression and police brutality. Kaepernick, some three years on, is still a free agent after not being able to sign with an NFL team.

Critics and analysts have since made claims that NFL teams don't want to sign Kaepernick because he displayed his political beliefs so publically. There have been many rumors suggesting that President Trump's distaste for the player has had something to do with no team being willing to take him on.

"I just couldn’t be a sellout."

When asked if her decision to not do the half-time show was anything to do with the Colin Kaepernick situation, Rihanna said: “Absolutely." The singer made it clear that she doesn't separate her professional work from her politics, stating: "I couldn’t dare do that. For what? Who gains from that? Not my people. I just couldn’t be a sellout. I couldn’t be an enabler."

The half time show is now being done by Jay-Z. Many have taken to social media to say that Rihanna was calling out the rapper and producer for taking the gig. I don't think that's true. Frankly, I think that Rihanna was just speaking her truth. It's the NFL that she's got beef with. After the enabler comment, she continued by saying, "There are things within that organization that I do not agree with at all, and I was not about to go and be of service to them in any way."

Rihanna has no problem calling Trump out.

The singer clearly finds Trump's tweets a source of frustration. Rihanna has been known to call him out publicly on social media. Take the above example, where she holds Trump accountable for refusing to call the white gunman of El Paso a terrorist.

The El Paso shootings took the lives of twenty-two victims.

The gunman committed the atrocity as a hate crime against the Latino community. After the gunman, Patrick Wood Crusius, was arrested, it was revealed that he had been a relatively normal, white, Republican Trump supporter.

With two mass shootings happening over one weekend (El Paso, Texas, and Dayton, Ohio), people wanted assurance that steps would be taken to prevent any more from happening. Trump did not want to lose his NRA support and so was not about to start making promises about stricter gun laws. Equally, the president was in the middle of his raging ICE campaign, rounding up anyone Latino that he suspected may or may not be an illegal immigrant. His policies and his propaganda of hate, many believed, had directly led to these tragedies. He was noticeably tongue-tied dealing with the crisis.

Congresswoman, Alexandria Ocasio-Cortez, was there for the people.

When discussing the Dayton and El Paso shootings during her Vogue interview, she said: "It is devastating." Rihanna clearly has thought a lot about the issue of gun laws in the U.S. She followed on by saying: "People are being murdered by war weapons that they legally purchase. This is just not normal. That should never, ever be normal."

Rihanna spoke frankly about what she meant when she called Trump out for his tweet following the mass shootings. He had excused the behavior of the shooters, saying that their actions were "an act of cowardice" and were the result of a "mental illness problem." Rihanna rightly pointed out this would not have been the case if the shooters had been people of color. She stated: "The fact that it’s classified as something different because of the color of their skin? It’s a slap in the face. It’s completely racist."

"The most mentally ill human being in America right now seems to be the president."

Rihanna isn't the first public figure to question the sanity of the president, and I don't think she'll be the last. She made the point in relation to Trump defending the white shooters as being mentally unwell. Rhianna weighed in saying: "Put an Arab man with that same weapon in that same Walmart and there is no way that Trump would sit there and address it publicly as a mental health problem." She concluded her statement with the afterthought: "The most mentally ill human being in America right now seems to be the president."

Some of Trump's actions have been questionable.

I mean, the wall, for starters, rounding up innocent people and locking them in ICE detention centers, riling up other countries, asking to buy Greenland(?), terrorizing the young eco-warrior, Greta Thunberg, I could go on all day... It's harder to argue a case for his sanity.

A philanthropist and global spokesperson, Rihanna strives to help people in need across the world. The singer spoke at a GPE Financing Conference organized by the Global Partnership for Education in Dakar. While Rihanna, a Global Ambassador for the organization, was there to discuss how to fund the education of a quarter of a billion children, who are currently out of school, it seemed others had other things on their mind...

French President, Emmanuel Macron, clearly couldn't keep his hands to himself, and wouldn't settle for a formal handshake.

"...So long as you do as I say and fund the educations of a quarter of a billion children, Mr. President." Honestly, why do these creepy white dudes keep getting presidency? It's gone on for long enough, surely.

We need people in politics that actually care.

"I feel like the darkness has actually forced people to find this light within them where they want to do better."

Rihanna actually spoke of hope in her Vogue interview. The singer was not suggesting by any means that things are not bad right now - in fact, she stated that the whole immigrant conversation in America was making her feel "sick to [her] stomach" - but she mused that the hopelessness was pushing her to do better and be a light in the darkness.

"I’m an immigrant tryna get yo country together."

Once, when Rihanna was encouraging people to vote in the mid-terms on Instagram, she received a comment from a fan questioning her motives. They wrote: "Are you even a US citizen? Honest curiosity." To which she responded, “Nah I’m an immigrant tryna get yo country together. Did u vote?"

America was built by immigrants.

Something people like President Trump seem to forget. Everyone in this country, besides the Native Americans, comes from a long line of immigrants. This used to be celebrated, and now they're trying to make us forget it. Rihanna hasn't forgotten, though. During her interview, she made that clear. At one point, the singer asked her interviewer: "Think about this. What does America stand for? A bunch of immigrants." And she's not wrong. I think that we could all do with spending an afternoon with Rihanna. The world would certainly be a better place if people thought a bit more like her. If you're not convinced that Rihanna has got her head screwed on, maybe you ought to carry on scrolling. Next up, we have a story explaining how Rihanna became the richest female musician in the world.